Save
Lighting Project and Product Design - The Head Office of the Law Society, Paris / iGuzzini | iGuzzini 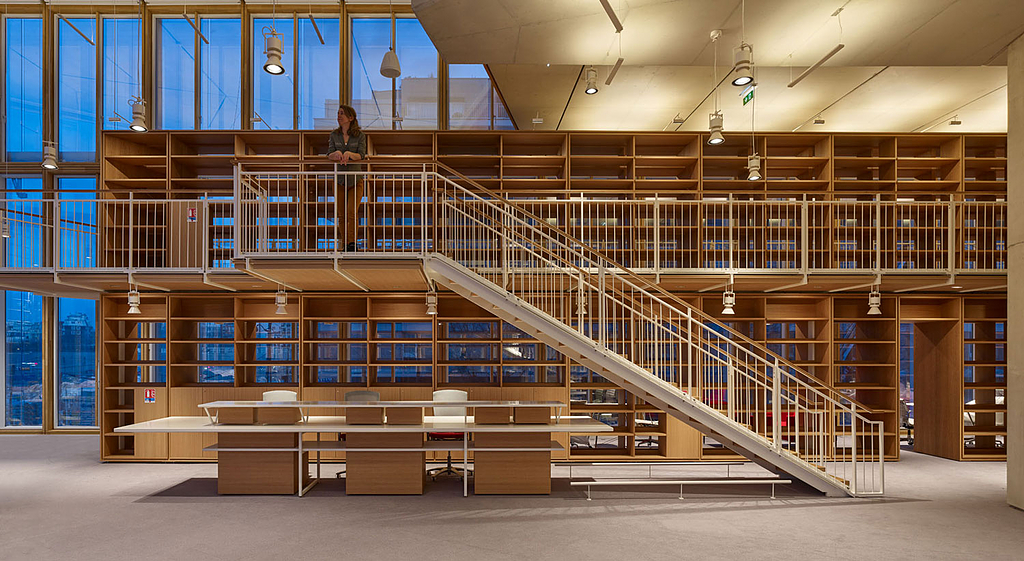 The Maison des Avocats ( the head office of the Law Society in Paris) is part of the new Judicial Headquarters, a group of buildings designed specifically for the legal profession. Designed by the Renzo Piano Building Workshop, the design development and finished product was developed by three key ideas: Transparency, context, and functionality.

Transparency - a symbolic value for the institutions responsible for administering justice. the entire life of the building is clearly visible from the outside.

Context - its main façade faces the atrium in front of the courtrooms and creates a square, completing the Martin Luther King park, where the building's surfaces blend in with the newly planted trees as well as those that are fully grown.

Functionality - The Maison des Avocats will become the main site in Paris for professionals.

iGuzzini was responsible for providing industrally manufactured products, having to even create special projects unique to the project. The lighting project was lead by Franck Franjou. The first aspect Franjou had to take into consideration when fine tuning the artificial lighting was its relationship with natural light and the outside. One particular challenge was essentially achieving indirect lighting, highlighting the architectural quality of the cement ceilings and using minimalist lighting systems which almost completely blend into the overall vision of the building as invisible elements. Only the flow areas not visible from the outside and the staircases receive direct lighting as do the offices. The two main products designed were; a lightweight horizontal suspended light, and "task light" table lamps for desks in the building.

Suspended Light: The suspended light is designed to give off light both from the top and the bottom. Beyond providing general lighting, a design goal was to make the light disguise itself, to ensure the minimalistic and industrial design of the building was not lost from the lighting, and to make the light disguise itself. The light given off from the top is used to highlight the unevenness of the cement, as well as completing the direct light given off by these lights.

Table Lamps: The same shapes devised for the suspension light were developed with specific installation solutions, to create table lamps that provide a "task light" for those working at desks. The colour temperature selected was 3000 K to create a warm white light. The most important design factor was to maintain a feeling of general diffused lighting typically found during the day, and to ensure the concept of transparency was maintained even into the evening.

The Le Perroquet suspension lights are repeated in a large number of rooms, these rooms include the auditorium, the cafeteria areas, assembly rooms and in offices along with the special suspension light.

A special hooking system was created for the Laser Blade Wall Washer on the sheet metal structure of the panels that make up the bookcase: this way the lights guarantee an even, vertical illumination. The Laser Blade General Lighting recesses were used along the corridors and through areas.

The use of cement as a building material proved to create a challenge for the lighting design. Specific installation solutions were devised for all the recesses as well as the applications with the base for the Le Perroquet light. All the outer casings for the recesses were delivered well in advance of the lights being fitted.

Outside, the building's roof terrace facing the Courthouse is lit by Linealuce, recessed into the wooden paving which projects the light given off onto the glass balustrade. At night, the building looks like a genuine lantern where the light is generated from the heart of the building and appears to tail off onto the facades, highlighting transparency and beauty.