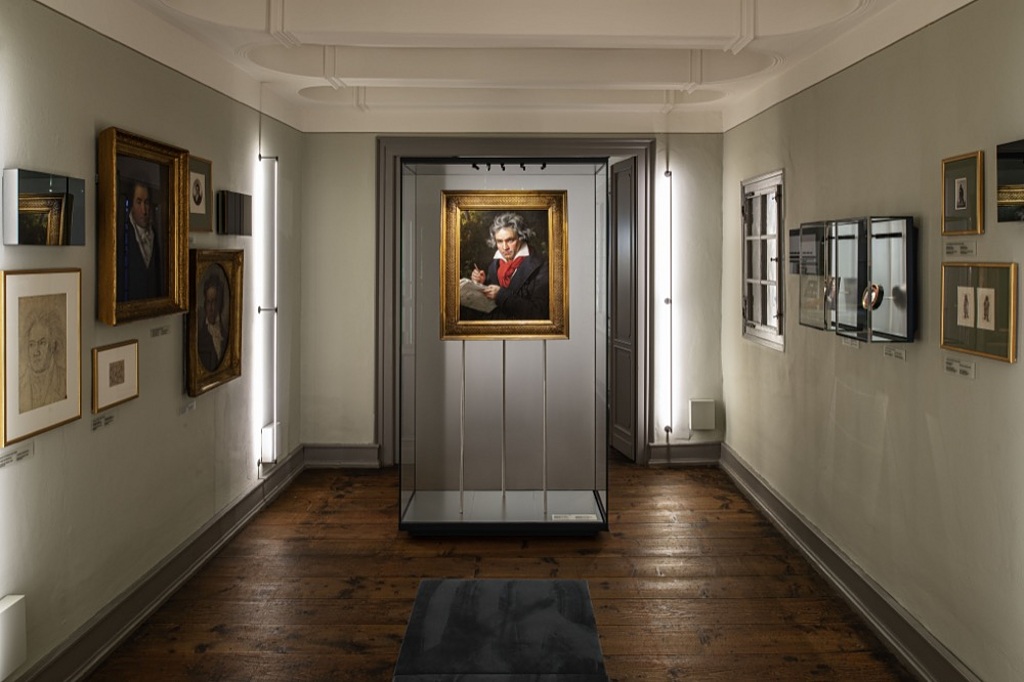 A new exhibition has been created at the Beethoven-Haus in Bonn for the 250th anniversary of the composer's birth in the building in 1770. Set in a small alley in central Bonn, around 100,000 tourists converge on one of the few remaining 18th-century bourgeois houses in Bonn, now a listed museum. In the new exhibition, the building itself takes on a central role in the offering and renewed interior mineral paints and plasters from KEIM are used to put the exhibits in the right light.

Undergoing several restorations, the last being 20 years ago, the exhibition had become outdated, so for the anniversary year of Beethoven's birth, a new exhibition including a renovation was planned. The building was reopened in 2019 after a complete restructuring of the permanent exhibition and extension in collaboration with Holzer Kobler Architekturen from Switzerland including plastering work and mineral paint using KEIM render course and Innostar paint.

After the structural repair and restoration from 1994 to 1996, the buildings were in good condition leading up to the recent renovation. The exhibition was updated by re-wiring the rooms and installing an adequate lighting system. This involved opening up walls and picking up the wooden floorboards. Plaster was only removed where cables were laid leaving the rest intact.

Lime plaster was used to close the walls for repainting after the electrical work, the mixture was based on recipes from the 18th century - on condition that as little as possible of the original substance was touched. KEIM products were chosen because the mineral paints and plasters are predestined for listed buildings due to their permeability.

KEIM Universal Render coarse was used to close the cable slots in all rooms and then an even surface was created with the fine variant. This was followed by applying the sol-silicate paint KEIM Innostar in a wet-on-wet technique. Applying the paint was done in two steps: pre-rolled and then re-rolled shortly afterward. The Cologne ceilings - beam constructions with stucco are an important historical feature and these ceilings, too, were refinished with KEIM Innostar, but this time using a spray application.

From the restoration report of the 1990s, it became clear that the original interior colors could only be partially reconstructed after previous renovations resulted in considerable losses of the original substance, especially on the walls. It was decided to adopt the previous color design with, among other things, pink, reseda green and grey tones of the wall surfaces of the rooms in the back and front building but with more intensive shades. This was also done since the exhibition is coordinated with the wall color in a monochrome design.

The existing green, grey, blue-grey, and orange pastel shades on the walls were greyed and urgently needed refinishing. The elegant showcases and exhibition buildings blend harmoniously into the historical rooms and create a reference to the original use of the building as a residential building. The historical house itself is staged as the central exhibit through the colorfulness of the rooms and the exhibition furniture.

In this colorfully refreshed environment, the Beethoven Collection is no longer presented in chronological order as before. Instead, the individual rooms, spread over three floors, present various themes relating to Beethoven, his life, and his work. The themed rooms were color-coordinated, with a red selected for the theme of love and green for the theme of nature.

After only a six-month closing period of the Beethoven House, exhibition rearrangements and renovation work were completed. The time aspect was a great challenge, with the greatest importance placed on bringing the fine plaster on the wall back into line as if nothing had happened. The theme concept has been well received by visitors. The new layout of exhibitions means that the house is perceived much more as a residential building. All in all, a beautiful symbiosis of house and exhibition has been designed. And in addition to the newly conceived exhibition, the careful craftsmanship with the corresponding products suitable for listed buildings also played a large part.