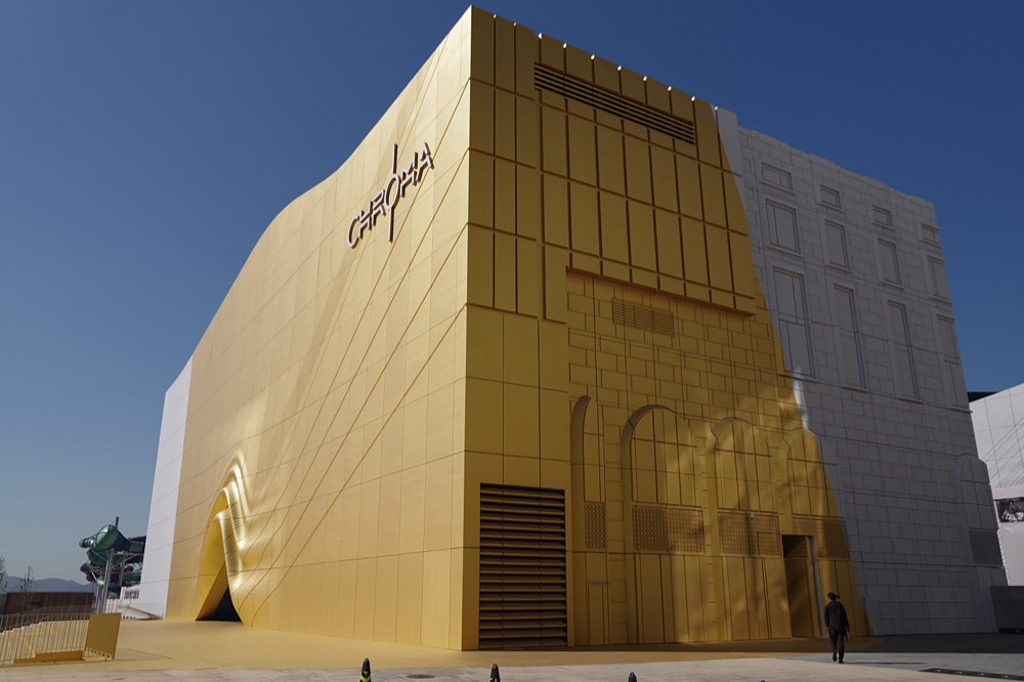 As neither the nightclub nor entertainment center requires natural lighting, the building form was reduced to simple cubes without windows. Architects MVRDV transformed the cube basis with an ingenious interpretation for the façade design.

Where the Curtain Rises

The glass fiber reinforced concrete curtain panels form an independent layer, with structures and forms taken from the immediate surroundings. Windows, arches, squares, and doors only exist in relief and remain basically blind and without function. The relief has been inverted with the joints of the stone ashlar rising upwards from the flat surface.

The Korean façade constructor Tec-Wall produced and installed 3869 different modules to make the dummy façade. In a theatrical gesture, instead of conventional entrances, the façades are raised like curtains held in place by unknown forces. An entire corner of the building morphs upwards, with the line of the eaves rising accordingly. Where the façades rise out of the ground, the lighting effects catch the eye as they shift colors playfully over the mineral painted surface. Almost all of the VHF panels were given a white coating after they had been installed.

The client and investor decided to emphasize the airy curtain and the relief even more and so the nightclub cube was given a luminous coating of KEIM Royalan in gold. This mineral-based façade paint was specifically designed for tropical climates, as well as being durable, lightfast, water-repellent, vapor-permeable and it produces a matt, velvety surface.

The surface quality of the mineral paint visually underlines the effect of the golden pigmentation: a soft shimmer covers the plastically shaped façade, which placed very special demands on how the paint application was performed. The large number of joints, folds, and curves as well as the decorative elements were designed to present the appearance of a uniform, all-encompassing color and needed careful treatment accordingly.

Almost all of the mineral paint itself was applied using a roller directly onto the concrete panels, this step partially leveled the surfaces before the final coat of paint. Joints were smoothed out with special joint brushes. The large number of projections and recesses and the three-dimensional shape of the base structure required careful work. In line with Asian practice, the painters used ropes hanging from the eaves like the professional climbers who work in the industry.

A Luminous Accent, Even at Night

Whilst the façade that faces the central square shimmers almost entirely in gold, only a fraction of the side façades is gold and none of the rear of the nightclub is not gold at all. The full effect only becomes clear from a bird's eye view when the surfaces unite. Situated in the approach corridor of the airport, the gold areas combine to create a large, circular advertising area that attracts the attention of passengers from all over the world.

At night this effect is even more intense: whilst the white façades are illuminated by floor lighting that emphasizes the relief, downlights accentuate the golden façade areas – this creates the astonishing impression of encountering an early morning sunbeam in the dark.