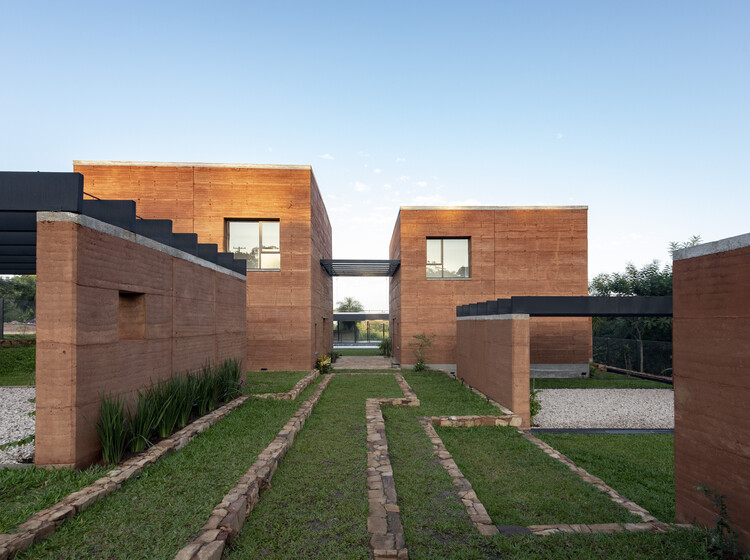 "There, if the mud is soft,
sings its sincere joy.
I would like to be a ovenbird
and make my hut singing.

As its house is the center
of all love and skill,
he takes it out of his head
and puts his heart inside.

He works it in straw and mud,
he works it beautifully,
that in mud and straw
is a bizarre architect."

“For the hornero (ovenbird), to build is to protect" said a renowned ornithologist when consulted about the lifestyle of this constructive bird. In the same eagerness, families build their houses, with the objective of creating a home where life develops. A space to grow and receive family members.

With the two volumes that emerge from the natural terrain, it is clearly exemplified that volumetric solidity is not synonymous of heaviness. With materiality, such as aluminum and glass, a light atmosphere is created on the façade and the phenomenological sensation inside them. A couple of rational volumes, which house a predominantly residential program, and together with horizontal elements create a dynamic yet harmonious formal language.

The mastery in the use of rammed earth allows us to see the project and the landscape as a whole, since thanks to the materiality and its natural texture it allows a relationship in which the architecture is totally adapted to the site and does not transmit an invasive sensation to the natural context where “Los Horneros” is implanted. It is worth mentioning the southwest orientation in which the project is located, which makes it possible to consider the project as an ecological and sustainable architectural design. From its conception, this orientation seeks to reduce cooling and artificial light during most of the day, ideal for a summer city like San Bernardino is.

In its interior environments, as a result of the combination of alternative materiality, such as the wall and its aforementioned orientation, a pleasant internal microclimate and comfort for the users is possible. It is also important to mention the spatiality and housing functionality of “Los Horneros”, allowing fluidity and dynamism in their routes between houses and their natural surroundings, also at the same time offering a perception of a more intimate and familiar shelter.