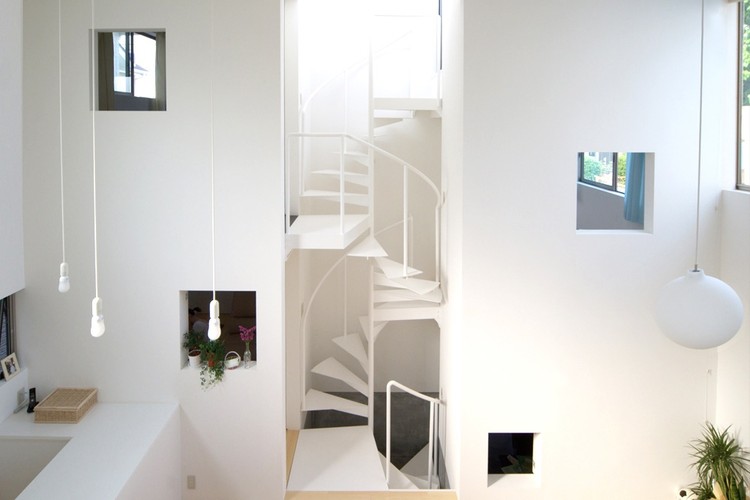 Text description provided by the architects. In past 60 years, as information technology progressively changed, in Japan, our housing industry has rapidly adjusted to it. This “forced adjustment” to our society has caused a transformation of our traditional lifestyle, and housing space has been often talked by “nLDK” ; n (number of private rooms) L (living) D (dining) K (kitchen). The concept of nLDK is to describe how much value your house has. The spatial flexibility and relationship (private and public) among n, L, D, and K are separated and lost, and as a result, “function” started to walk alone.

Our proposal to these two houses, “WITH” and “BEAT” are to try to re-consider and re-organize a quality of relationship of nLDK to re-adjust to a current and a future lifestyle.

Opposed to the previous project “with”, this house is located on an urban area in Kanagawa, Japan. There were already 3 houses built in the North, East, and West less than 1 meter away from a property line, and in the South, a public park extends to provide good natural light into the property. In the density situation where the proximate environment is inevitable, especially in small property like here 80sqm, the client family mainly requested the privacy with a sense of relief.

First, we imaged “plaza” inside of a house as LDK. This plaza is not like a park opening to nature, but more like Plaza del Campo, Siena, and Plaza del Rotunda, Rome Italy which are created by studying human scale and historical urban fabric system. Even though they are created artificially, they are bringing invisible relief into our mind when we are there. It’s like you are lead to be an illusion between inside and outside….. So we started to design how we can bring the illusion that a family can feel being outside when they are living in this house. The answer was to create a 5m double volume plaza (LDK) that exists as a family can share all activities such as cooking, eating, playing, studying, and even running. Opposite to the plaza (LDK) placed in the center body of a house, private rooms (master bedroom and kid’s bedroom) placed in different levels and service rooms (bathroom, toilet, and storage) surround the plaza (LDK) and act as a buffer zone between outside and LDK to stabilize their day life from the environment around the house.

Loft space in the second floor is also connected to the double volume LDK space with no wall and strengthens a unity of space.

In addition, the interior elevation of square windows of each private room, a white spiral stair in the center, and natural light penetrating from a high window and a skylight in the loft space lead to the atmosphere that makes a family feel being outside.

Since we had to find a solution at low cost budget, an exterior skin had to be one material, and thought the house should be a mass and a unity object. We chose black color which makes its existence appearing in the urban environment.

In the proximate urban area like Tokyo, people always look for the private space where they can hide and disappear from the outside activities. Here we started to design how a house can settle a boundary of living activities that are happening in outside and inside everyday.