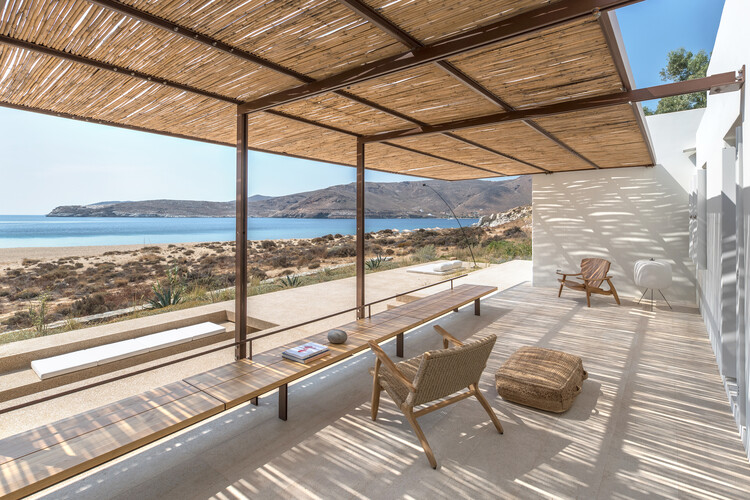 Text description provided by the architects. The study concerns the completion of three distinct vacation residences in an existing complex located at Vagia Beach in Serifos. The intervention revolved around the reinstatement of the relationship between the buildings and the natural relief, as they had initially been constructed at a higher level than permitted, in order to avoid the high water table in the area. Consequently, the ground floor remained cut off from the surrounding environment, while the buildings appeared starkly detached and exposed in relation to the natural terrain.

The considerable height difference was scaled towards the beach through two successive lowerings, aiming to improve the view of the complex from the sea. The ground level of each residence responds to a first, same-level, shaded terrace, before ending at a lower-level wider terrace, oriented towards the West and the view.

The western terraces either function as retaining walls, in the form of solid, cube-shaped formations, or lead, as a slab, to the dry stone retaining walls surrounding the whole composition. The use of bush-hammered sand-colored concrete for the terraces gives the sense of a solid, natural material optimizing their integration into the natural landscape.

The intervention then focused on the creation of intermediate spaces, inner patios, and elements that were absent from the initial study, but are considered necessary for the proper function and use of summer residences.

Filtering public movement towards the interior, this transitional space provides the residences with an additional outdoor place, an introspective patio that is vital for the users’ social life, which is a typical aspect of Cycladic architecture. Each residence thus acquires its own enclosure, with inner patios, intermediate spaces, and open terraces aligned with the view.

The element of “linear wall” forms the patios. The linear walls are constructed from local dry stone, following the design axes of the three residences, to reinstate the notion of a “hard boundary” that was absent from the initial design. The stone wall boundary, with its fulls and voids, is articulated at the rear part of the residences, functioning both as protection against the strong winds of the area, but also as a primary filter separating the public from the private space of the houses, thus ensuring the necessary privacy for the user.

The element of water through a fountain is used at the center of a common courtyard that becomes a reference point for the complex. Moving from the central entrance slightly upwards within the surrounding area, the walker gradually acquires a view of the space, intensifying the element of surprise, to end up at this lower-level courtyard placed centrally in the composition, where all movement initiates.

The axes of movement, linear walls, planting, water elements, and seating areas become the primary compositional elements, dynamically contrasting the new additions with the pre-existing building shells. The materials, local stone, and concrete colored by red sand from the excavations and metal constructions integrate the complex into the surrounding environment and serve as a reference to Serifos’ mining tradition. 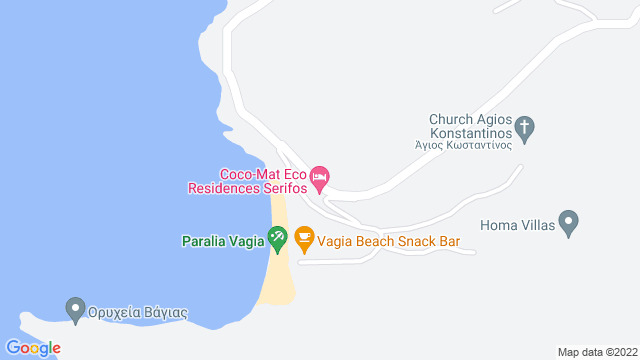