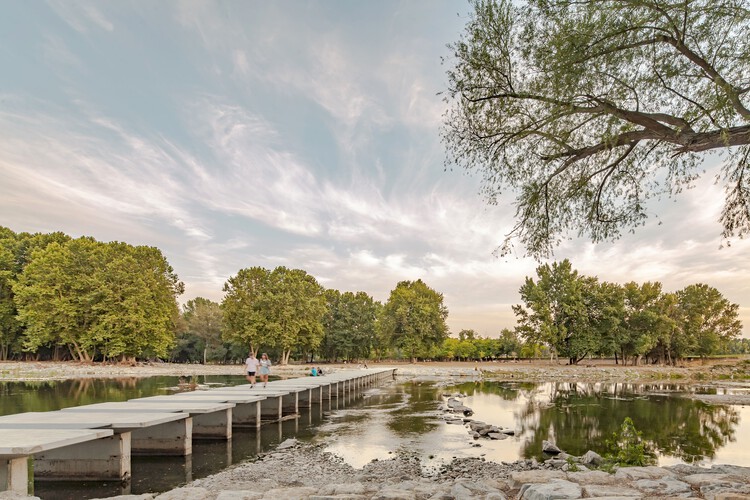 Text description provided by the architects. The main objective of the project is to become a catalyst for activities of leisure, culture, sports, and education around the Ter riverbed in Manlleu. The objective can be explained by three basic strategies:

The first one is a territorial logic promoting the riverbeds as spaces of landscape interest. The second one is the urban strategy, consolidating the green recreational-cultural axis tangent to the river. And the third one is the technical solution, a very punctual action with low environmental impact.

THE TERRITORIAL LOGIC, THE INTER-MUNICIPAL SCALE: THE RIVERBED. The project pursues the objective of recovering the activity of the riverbeds. The riverbeds, by definition, have always been magnificent ecotones, that is, spaces that live from the ecosystem of the river itself and from the immediately adjacent one; the intermediate spaces. These areas have great landscapes and environmental wealth. As they pass through the urban centers they have been abandoned, channeling the river and forming a barrier between the floodable and non-floodable spaces. The proposal is based on the conviction that, if we return activities to these places and blur the line between the river and the city, we will enrich them, thus promoting maintenance and the feeling of belonging.

THE MUNICIPAL LOGIC, THE URBAN STRATEGY: A GREEN AXIS. Manlleu has lived from and thanks to the river: agricultural and industrial activity has benefited from the layout of the Ter river. If the urban structure is analyzed, it can be seen how in periods of great urban development, the town has turned its back on the river. In recent years, the area has been promoted based on free spaces, cultural facilities, and sports areas. Thus, a new leisure-cultural axis appears tangent to the river on the left-hand side. This is an axis that must be strengthened. An axis that begins at the Renfe Station, at the extreme west, and continues through the sports area, the playgrounds, and the Paseo del Ter until it reaches the Ter Museum, at the extreme east. Right here, where there is a kiosk and a small jetty for kayaks, the course of the river forms a meander and generates a large meadow of about 30 ha on the right-hand bed.

The main objective of the project is to allow the jump from the left riverbed to the right, leading to an entire recreational-cultural axis in a large area that has been residual until now. In this way, Manlleu gains 30,000 m2 of free space. A space full of possibilities, from purely contemplative (walking through the meadow is a luxury) to sports (creation of new natural spaces for the practice of sport that respects the environment). Educational activities can also be promoted, almost as an extension of the Ter Museum, an open-air museum where not only the importance of the river and the ecosystems that surround it can be understood and explained, but also its heritage value.

THE CONSTRUCTIVE LOGIC AND TECHNICAL SOLUTIONS. Among all the possibilities, a passallis-walkway is chosen, since they are infrastructures with low environmental impact. A “passallis”, by definition, is a floodable element. Thus, they are artifacts that are naturally incorporated into the dynamics of the river. The project proposes a series of concrete platforms that evoke the old steps of the river where one could pass from one riverbed to the other by jumping from stone to stone.

The geometry responds to the specific needs in the fluvial environment and therefore there is no formalism but an efficient response to the hydraulic and functional demands. Some 25cm thick concrete walls, perpendicular to the river flow, placed 2.25m apart, guarantee the hydraulic capacity for the average daily flow. Above, cantilevered 10cm deep concrete platforms of 1.5m x 3.95m minimize the impact on the flow. The platforms do not touch each other and, in this way, the structure remains open, improving the hydraulic behavior of the "passallis" in episodes of large outpourings of water. Between platform and platform are the metal rails, which, in addition to providing the passage with the necessary accessibility even for service vehicles, help with maintenance since they are removable.

When passing from one riverbed to the other, the pedestrian finds herself outside the comfort zone of the urban ecosystem and, unprotected becomes aware of the force of the river. The noise of the water brushing against the walls, the humidity, and the change in temperature, all help to feel immersed in the river ecosystem.

Over the years, the floodable bridge will evolve: the color of the concrete will change depending on the water levels, the walls will show scars of stones and trunks caused by the episodes of various floods of water, and the metal framework will darken due to solar radiation. In this way, the "passallis" will be transformed, like the banks of the riverbed, into an ecotone: a transition zone between two ecosystems, the urban and the fluvial. 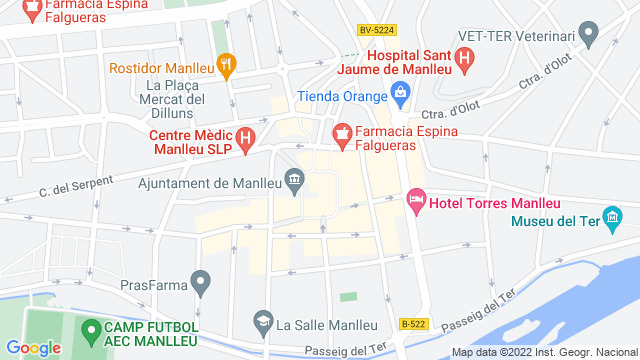 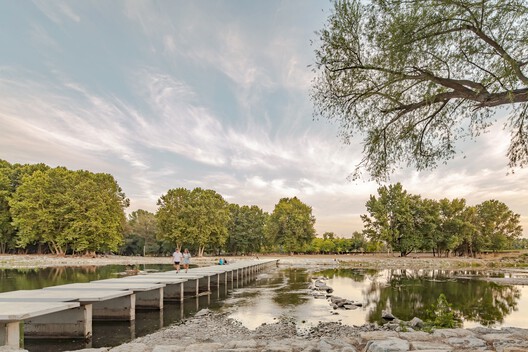