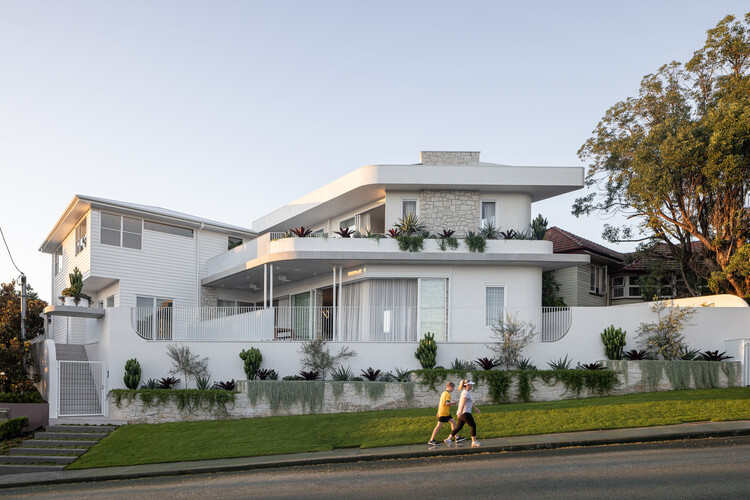 Text description provided by the architects. Clare, an ode to the previous owner, is a series of sweeping curved terraces built around an existing pre-war Queenslander, set on an awkward L-shaped sloping inner-city Brisbane block. The design takes advantage of its north aspect, city views, and dual frontage and puts raw materials and landscaping on show.    The concept was to create a home that followed the unique shape of the block, both in plan and in section, taking advantage of the northeast aspect and city views.

The existing 1946 house was kept, lifted, and built under. The original house doesn't have hallmark features of pre-war Queenslanders, so this renovation aimed to incorporate the old house into the new design, rather than contrast it. Heritage is acknowledged by highlighting pitched roofs by framing around them and wrapping the new extension in a mix of weatherboard, rendered block, and natural stone.

Curves feature heavily, being used throughout the home in both plan and elevation. Inspired by the original owners, a long-term employee of Arnotts Biscuits, the house references the Monte Carlo and Arrowroot biscuits. The landscaping and facade appear as a series of sweeping curves that terrace from the natural ground all the way up to the top of the roof. A continuous and flowing layout through many openings including double opposing corner stacking doors that hide away behind pillars of natural stone. The outside is let in via planter boxes and extends into the center of the home via a feature palm tree.