Save
House Under the Trees / Doro 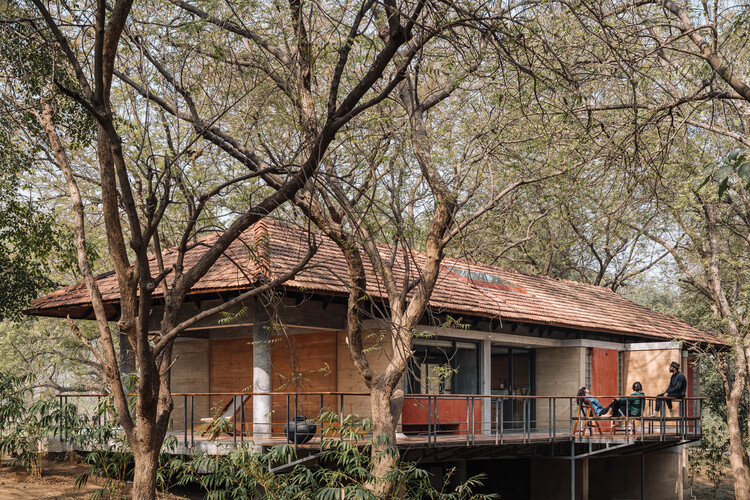 Text description provided by the architects. Hidden in a nook in the farmlands of the village of Jaspur, in Baroda, these Earthen walls stand humbly among a cluster of Neem trees, cutting across undulated ravines carved into the land by storm waters, through the ages. Nestled under the densest patch of trees, the building is shaded by vast canopies, as the landscape meanders along with the natural lay of the land. The home is envisioned for two, engaging in farming, as a respite from the regular and their occasional leisurely gatherings in the green outdoors. A curvilinear wooden deck leads into the house through the dining space, from the higher flat land, cantilevering over the canyon on the other side.

The 22 m by 7 m linear built and the canopy was devised tactfully acknowledging all the existing trees, raised on columns, leaving the ground free. The elevated roof came about from an idea to create a sense of canopy under a canopy without overpowering the site. This also helped to enhance volume, which added to the openness of the space in the otherwise compact plan. The parallel walls frame the panoramic expanse of the land, through the openings, allowing the lush greens to partake within the house. The midriff wall extends out to block the west sun during the summers, yet allows the winter sun through. It bears as a visual separation between the communal and the private spaces of the house, encasing the surrounding deck and the covered sit-out, marked by circular columns.

The outdoor spaces emerged through the transformation of the site, practically observed across the seasons and the adaptations made by the team through the process of construction within the cycle of a whole year. Working under the harsh sun, most artisans would seek respite in a natural bowl across the contour, shaded with large trees, and the others under a one-and-a-half century old, large neem tree during tea and lunch breaks and power naps. The bowl was altered as a kund (mini-amphitheater) floored with red oxide using its natural gradient with a percolation pit at its center and an otla finished in green oxide, raised as a seating space under the old tree.

The 8' high walls, built out of the excavated earth from the site stand on a raised slab, roofed with wooden rafters using reclaimed red pan wood from the ship-breaking, crate wood as the ceiling tie layered with Mangalore clay tiles. Yellow oxide for the indoor flooring, toilet walls and river polish Kota stone, and wooded deck on the exterior complete the palette of natural materials.

The project employs skilled artisans along with local villagers generating employment for the villagers by skill transfer on-site through the building practices and landscaping. Being at a remote site, working alongside skilled and unskilled labor, testing, construction methods, learning and unlearning, and indulging in skill-intensive methods came about as a challenge but also strengthened social relations in the process.

Ecology. Rather human ecology. Where beads of earth, air, forest, land and energy are woven together. Rather purposed by what we have in abundance, the human, the karigar, the mazdoor and paas ke gaav wale. Altogether re-purposing, reclaiming, rethinking. Soil, Wood and Ways of building, respectively. Ignoring the drawing board for a while, but identifying opportunities for intervening where it matters. 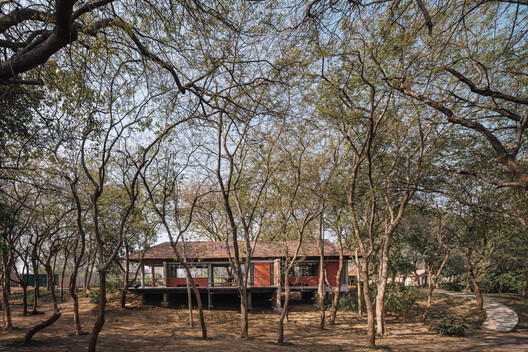