Save
The FriYah Living Facilities / IDS 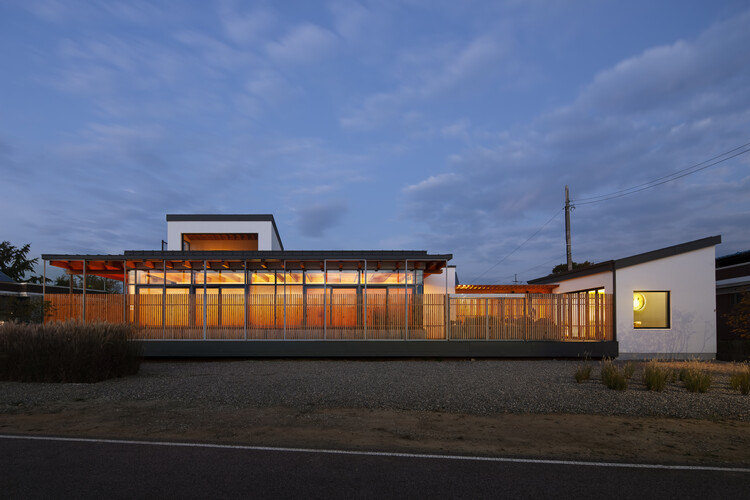 Text description provided by the architects. One of the mistakes that people who dream of leaving their apartment and living in the country is to choose an unnatural site surrounded by a retaining wall. In order to obtain a large yard, they build a sloping ground up high and flatten it so there can be no nature or community. It does not contain any stories from the land, so even if there is a yard, it is no different from the life of an urban apartment. The land of "The FriYah" is not only surrounded by houses around the village but also the shape of the land is sizzling. It is too thin and long to arrange the house facing south. Nevertheless, the yard space facing the surrounding houses like a rural house and the wonderful view of the Namhan River beyond the bicycle path is more than offset such shortcomings.

We wanted to build a ‘New Life Style’ space required in the era of climate change. Changing from concrete to timber and fossil fuel to solar energy and electric vehicles and offering a space to share with people who love dogs and bicycles. ‘The FriYah’ was intended to present a new type of country house and to show how modern the wooden architecture is.

The riverside view was considered the top priority so that the characteristics of the thin and long land could be revealed. Unlike a functional house like an apartment, when a long space was divided into intervals, it became a straight house with nine bays. The ostentatious space, such as a two-story open living room, was not considered from the beginning. Rather, it was composed of a single story in consideration of usability, and a view deck and a bathtub were installed on the rooftop of the second floor to enjoy the dramatic scenery more dramatically.

The key of this house is a glulam pillar and beam made of domestic larch. We assembled a single 13-meter-long beam at once like the traditional joinery so the framework of the house could be completed in less than half a day. A long screw nail was enough instead of a complicated fit or hardware. It is a simple and clear way of constructing. Thin and wide glulam pillars and flat beams further highlight the modern sense of wood and rhythmically arranged rafters enhance the structure of the space. For the people in the neighborhood who saw the house being completed through a different process from ordinary concrete, it was just a strange house. 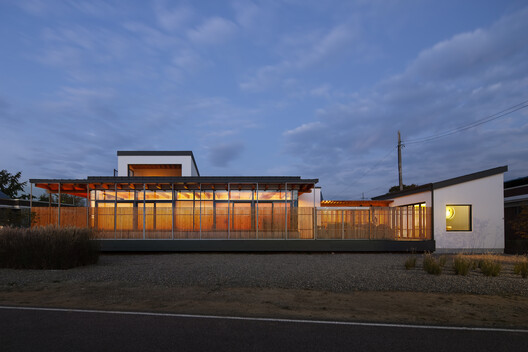