Save
How Do Tensile Structures Work and What Materials Can Be Used?
Share
Or
Copy

Let us return to the first architecture class on structures and the classification of structural efforts. In most structures, whether natural or man-made, compression forces are the primary actors. These are efforts undertaken with equal and opposing loads, applied in the interior of the structure, which tend towards the shortening of the piece in one direction - or compressing it, as the name indicates. It is not difficult to find examples of this: for example, a stone wall or a wooden log can resist the weight of a covering through internal compression efforts that are inherent to each material. Tension efforts, on the other hand, tend to lengthen components in the direction of the applied force of action. Steel, for example, is a material with good tensile strength. It is used in reinforced concrete precisely in the parts where the piece is in traction. But it is also possible for a structure to only have tensile parts, as is the case of membrane, tensioned, or tension structures, which consist of surfaces pulled by the action of cables or ropes in which the masts absorb compression efforts.

According to Robert Cartes, "Tensile structures are anticlastic forms, characterized by flexible fabric membranes which are supported by cables, a structural steel framework and foundations." The first examples go back to very rudimentary architectures of our ancestors, with animal skins stretched out to create shelter. As this article demonstrates, the history of tents highlights the ingenuity and adaptation of humans, with examples such as the "tipi" tents of Native Americans or the Bedouin Black Tents, built with local resources and knowledge. There are many examples throughout history, from simple tents to large circus structures, including research that shows their use even in Rome's Coliseum, which was used to protect the public from rain.

However, this technology quickly evolved during the twentieth century, with large contributions from the architect Frei Otto, who was fascinated by experimentation and had already applied the concepts of sustainability long before this term became popularized. According to a retrospective of his career, produced by MoMA, "Drafted into the German Air Force, he served as a pilot during the Second World War. In a prison camp at Chartres he was put in charge of a reconstruction crew attempting to repair bridges and buildings without any construction materials. His methodical ingenuity led Frei Otto to structural solutions which, he discovered later as a student, were not common engineering practice but genuine innovations." Otto developed extensive trials on tensioned structures and made important and imposing works, such as the Munich Olympic Stadium. "Frei Otto's theory of minimal structures has been summarized as an attempt to achieve, through maximum efficiency of structure and materials, optimum utilization of the available construction energy. As a consequence he sees the architect less as a designer than as a manager of this energy, which is the sum total of material and labor involved in construction."

Another important name in this area was another German, Horst Berger, who developed mathematical calculations that allowed this process to be translated into the construction structure. Berger's works include the Haj terminal in Jeddah, Saudi Arabia, completed in 1981 and the Great Hall at Denver International Airport (1994).

Usually extremely sober structures with very few elements, including cables and frames generally made of steel, there are various options of materials that can be used for the membranes. These tend to be in constant development in order to increase their durability, ease of maintenance and the ability to withstand more strains. For exteriors, the most commonly used are the so-called "Structural Coated Fabric", which consist of an inner mesh coated by protective films that provide waterproofing, fire resistance and fabric colors. The most common materials are as follows:

This is possibly the most commonly used material. According to a study developed by ArchitenLandrell, PVC has good resistance and maintenance capacity, and is more affordable compared to other options. However, it allows the least amount of light to be transferred from the outside to the interior.

PTFE, an ethylene polymer plastic, is quite sturdy and durable. Nonetheless, it is the most expensive option and does not allow its disassembly and later reassembly. Due to its resistance to ultraviolet rays, it is widely used in extreme climates such as the desert or in very cold places.

When a project requires a greater degree of translucency, this is the most recommended material. Its functional characteristics resemble PTFE, with a lifespan of about 35 years and good resistance to ultraviolet rays.

ETFE (ethylene tetrafluoroethylene) is a fluorine-based plastic. This material has been widely used since the 1970s, and allows for almost complete transparency. Mostly used in greenhouses, facades, pools, zoos, and others, it has a good fire resistance and can be easily recycled at the end of its useful life.

In addition, there is ongoing research to incorporate new features and improve the efficiency of these membranes. For example, to include photovoltaic cells in membranes, integrate artificial lighting and further improve thermal and acoustic qualities so that their use can be more widespread and therefore fulfilling increasingly demanding requirements.

See this My Archdaily folder for several examples of architecture with tensile structures. 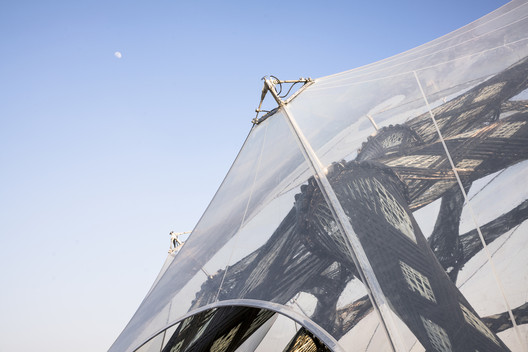