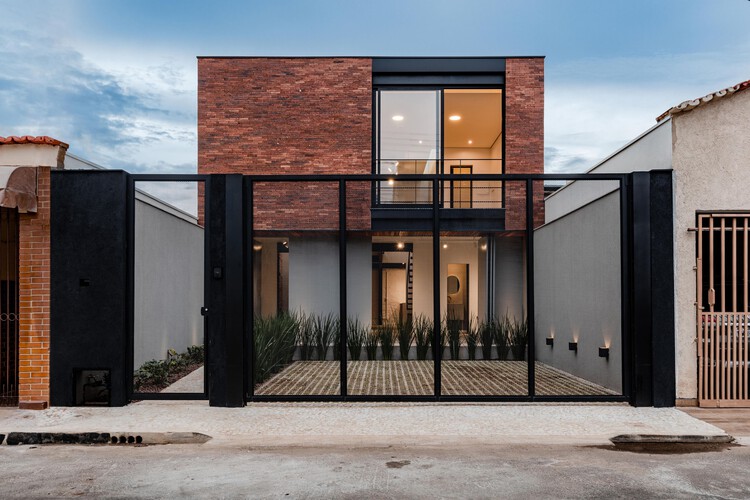 Text description provided by the architects. The client’s desire was to make the best use of the land through construction for lease, making it possible to occupy both as a residence and for commercial use. In this way, a study of the municipal legislation and taking into account the program desired by the client, solar orientation, specificities of the lot and surroundings, and financial issues, a design strategy was defined as a building composed of two floors and the occupation of the lateral distances. , proposing the lighting of the environments through two internal patios, each one located in the respective lateral borders of the land. The main patio works as an integrating element of the en¬tire building, allowing the entry of natural light and the visual connection between the environments. The openings proposed in the front facade also enhance the lighting of the building as well as the contact between the interior and the exterior.

The entire building was designed for the flexibility of uses, being possible for its use as a residence or as the headquarters of a company. On the outside front of the building is the garage with spaces for 2 vehicles. The first floor consists of two halls, connected by a wide circulation, which opens onto the main patio.

The front hall, where the toilet is located, is connected to the gar¬den/garage through a frame made of carbon steel, which, in addition to pivoting, runs on a rail, enhancing the inte¬gration between the spaces. The backroom is integrated into the building’s kitchen. Both also connect to the patio. Through the kitchen, you have access to the secondary pa¬tio, where the service area was proposed. The second floor is occupied by a large room, reversible to a third bedroom through its closure, and 2 other bedrooms/rooms lit through the proposed void. The flo¬or has 2 bathrooms, one of which is integrated into the bedroom/backroom, which is lit by the smaller void. The vertical circulation is swept by the lighting proposed through a zenith, creating a complex game of light and shadow.

The house was designed from a structural logic composed of metallic profiles and their fences executed in ceramic blocks. The slab covering the first floor is pre¬-molded in concrete and the covering of the second floor is in sandwich tile, a floor that has a plaster lining. For the finishes, materials of easy execution, maintenance, and taking into account the best cost-benefit were proposed; polished machined concrete was applied on the floors of the first floor, while in the second-floor environments the choice was laminate flooring for dry areas and porcelain tile for wet areas. The large openings provide the best ventilation and lighting in the building. We opted for the use of aluminum frames with tempered glass. For the facade, we used solid filleted brick. In the inner courtyard, to ensure better privacy without giving up ventilation and lighting, a wall made of solid ceramic bricks was propo¬sed for the floor, ensuring permeability, a hollow wooden deck was chosen. For the external paving, the material chosen was Portuguese stone.