PLP Architecture has unveiled plans for Tokyo Cross Park, an upcoming redevelopment of an entire district set to become the largest development site in the metropolitan area of Tokyo. The new 230-hectare "green heart of the city" will include four towers, two of which to be designed by PLP, a 31-metre-tall podium with an elevated green public realm, and a 2-hectare public plaza. 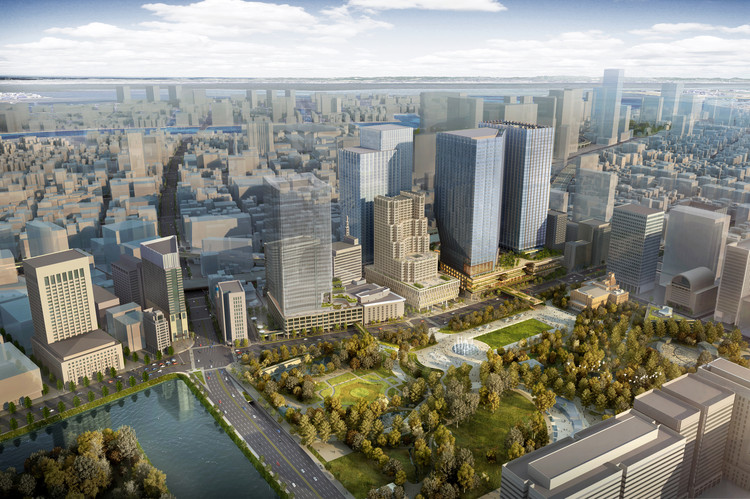 Set in the Uchisaiwaicho 1-Chome district of Tokyo, the site is at the center of Japanese culture, economy, and politics, connecting to the 16-hectare Hibiya public park and looking across to the Imperial palace. The Tokyo Cross Park Vision aims to merge key parts of the city and culture, creating a range of new urban experiences through three uniting concepts: the first crossover includes uniting natural life and urban life, the second uniting Tokyo's top talents, and the third uniting Japan’s top ten companies.

In terms of the design, the vision explores 5 principles: a human-centric city, which offers visitors large public spaces and connections with nature across the campus, a crossover between urban development x digital which sees the district supported by advanced digital infrastructure, “Omotenashi” which is Japan's world-class hospitality, evolving wellbeing through opportunities to bring natural elements into the site as an extension of these green spaces, and reaching a negative carbon footprint, reaching the government’s target of carbon neutrality by 2050.

The Tokyo Cross Park development will be the largest regeneration development in the metropolitan area of Tokyo, with a total floor area of 1.1 million square meters. The project will feature offices, commercial facilities, hotels, residential, co-creation spaces, and an extensive indoor and outdoor public realm, each working harmoniously to create a cohesive urban experience. A ‘park bridge’ will connect to the Hibiya Park, offering visitors a larger loop of safe and green pedestrian walkways, linking to surrounding stations and districts.

The site consists of three districts: North, Central and South. The North District will feature the Imperial Hotel’s new main building, designed by ATTA, and the PLP Architecture designed North Tower, which offers premium hospitality-oriented offices, commercial facilities, serviced flats and rental housing. In the Central District, which is connected to Hibiya Park by an open-air ‘park bridge’, will feature the PLP-designed Central Tower, which is equipped with offices, a hotel, banquet hall, a multipurpose hall, and cross-industry co-creation hubs. In the South District, Nikken Sekkei's South Tower will comprise of offices, a hotel, and wellness promotion facilities.

The architecture firm was appointed as masterplanner and placemaking strategist by a multi-disciplinary team of ten prominent Japanese companies hailing from various urban and economic sectors. Completion of the project will be done in stages, with the first being the South Tower in 2028, and the overall completion date in 2037. 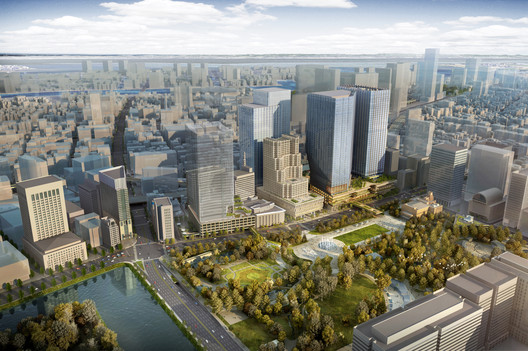