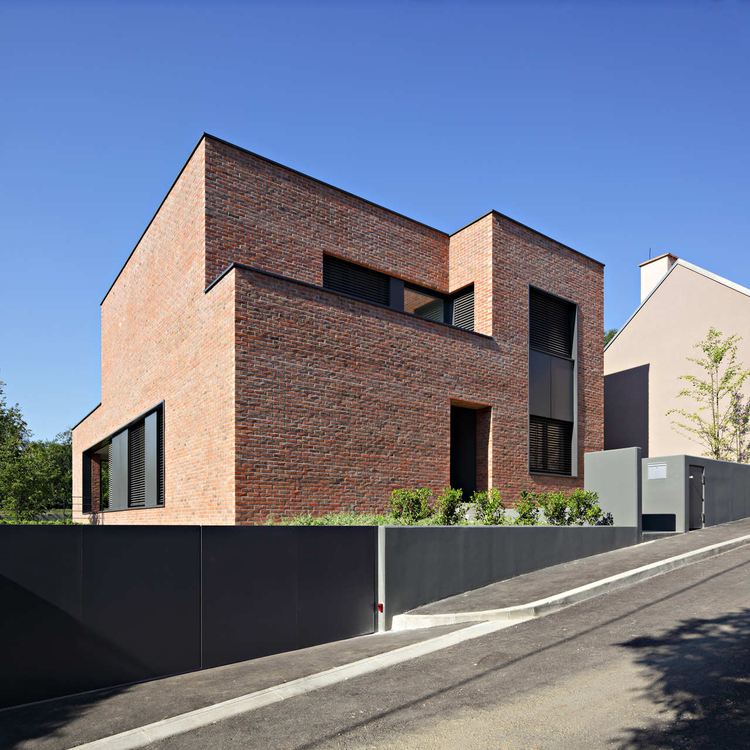 Text description provided by the architects. The house is designed for a young family who wanted to build a new home in greenery near the city centre. Mostly small apartment buildings in combination with some single family houses take place of old garden houses wich used to provide idyllic almost pastoral atmosphere of the area. The main requirement was to hide away from neigbours and open views and orientation to the south and greenery. By using waste brick as a facade cladding the house fits in the old and uncompleted built area of the surrounding.

Minus one level is in function of service while the first floor is sleeping area. Most of the family's activities take place on the ground floor. Big openings are oriented to the green areas as well as pulled-in parts of the main house volume wich garantee intimacy. North facade is very closed to the street view, while other three sides of a house volume are pulled into themselves. First pulled-in space stands for entrance and comunication between the basement and garage.

It is excatly the fluidity of the space that makes the strongest impression upon entering the house. The other pulled-in space defines atrium connected to the most vital part of the house - kitchen, dining and living. Atrium brings in nature as well as daylight into the house providing intimacy and hiding views from the neigbours. Third and the biggest one which at the same time connects and separates living and dining spaces is placed diagonally in the direction of the best view. Besides by big windows on facade, the house is heated using geothermal resources through the walls and floors which makes it low energy house.