Sou Fujimoto’s House of Hungarian Music, a contemporary cultural landmark dedicated to music in Budapest's City Park has officially opened its doors to the public. Considered as one of the most anticipated buildings of the year, the project is nestled within the park's trees, and is designed as an extension of its natural setting through uninterrupted glass volumes and a perforated roof structure. The museum offers a unique artistic experience combining landscape, architecture, and exhibition design, all dedicated to the creation of music and sound. 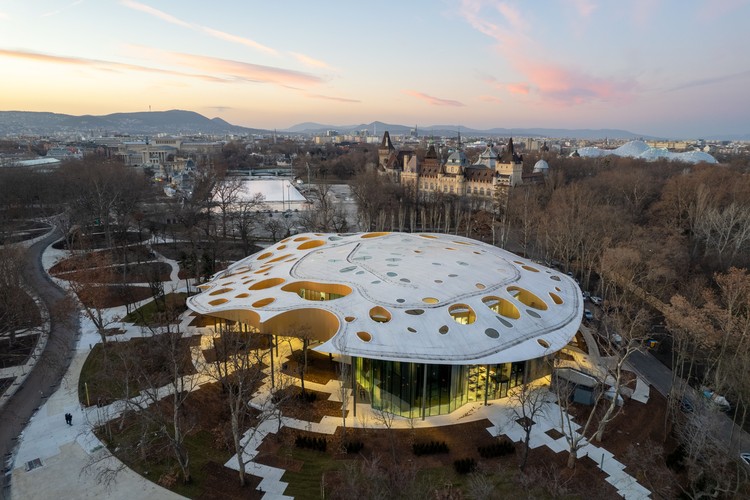 To reinforce the notion of “synergy and balance with nature” and to bring the experience of music to life through the interaction of light, sound, and nature, the architects used 94 customized heat-insulated and undivided glass panels to form a completely translucent facade, merging the exterior with the interior. The building's roof structure is pierced with 100 crater-like holes, inspired by the varying form of sound waves. The roof alternates between depths, allowing trees to integrate with the architecture whilst filtering light into the bottom level of the building. The light penetration creates a unique atmosphere as if visitors are walking under the trees within the interior space.

The 9,000 square-meter project features concert halls, exhibition spaces, and an open-air stage, which take visitors on a journey through the history of European music and showcases the history of Hungarian pop music from 1957-1993. The ground floor houses two performance venues, whereas the upper floor includes classrooms, a library, and office spaces, connected through a spiral staircase. The underground levels contain exhibition spaces highlighting European music history, with a particular focus on Hungarian legacy.

One of the most prominent features of the museum is the hemispherical sound dome, which was inspired by the 20th century composer, Karlheinz Stockhausen, who created the first 3D aural experience in the form of a spherical concert hall at the 1970 World Exposition in Osaka, Japan. The structure offers a fully immersive experience of a 360 degree surround system that accommodates up to 60 visitors. Sound is emitted from every direction from more than 31 loudspeakers, creating ‘hologram-like’ walls of sound.

Giving particular attention to the building's sustainability credentials, the project has been granted BREEAM certification, as it is equipped with special heating and cooling systems, rainwater collection systems, as well as a selection of native and low water-intensive plants species.

The museum is part of the Liget Budapest Project, Europe’s largest cultural developments, and aims to transform 21st century museum spaces to become a leading cultural tourism destination in Europe. 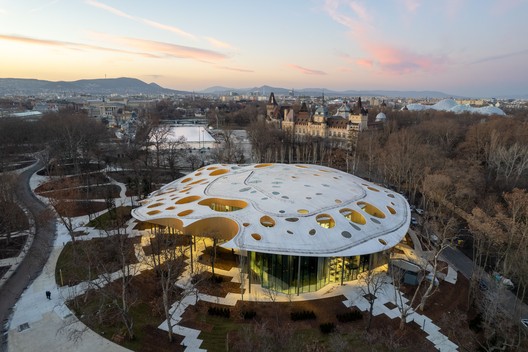