Save
Museum of Earth / Weiss Manfredi
Share
Or
Copy

Our friends from Manhattan-based Weiss Manfredi have shared their museum design for Ithaca, New York’s Paleontological Research Institution, which houses one of the United States’ largest paleontological collections. Situated in the Finger Lakes region, the natural landforms of the site inspired the architects to take advantage of the existing gradual 40 ft slope – a feature which resulted from a receding ice sheet more than 20,000 years ago. Rather than considering the site as distinct and separate from the museum, this project creates a new topography: a continuous, terraced landscape that fuses architecture and ecology into a cohesive expression of the geologic processes involved in the region’s formation.

More images and more about the museum after the break.

When examined in section, the project’s harmony of the built form in relation to the existing is completely evident; a strategy that allows the museum to seemingly be rooted into the site and gracefully rise from the ground. 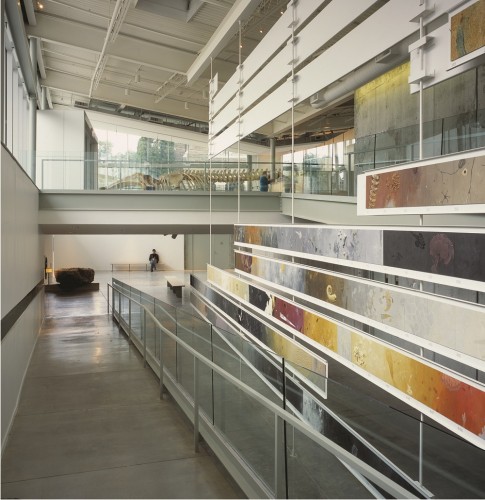 By capitalizing on the changes of grade found on the site, the interior spatial quality the visitor experiences also changes depending upon his placement in the museum.  Just inside the exhibition hall entrance, the lobby takes the form of a bridge leading to a reception area and gift shop. To the left of the bridge, the complete skeleton of a rare Right Whale, a contemporary mammal, is suspended above the exhibition area, which is reached by a long ramp. As visitors walk along the ramp they descend in time, passing artist Barbara Page’s installation of 543 different panels, each representing one million years of geologic history. On the lower level, the exhibition extends through three geological periods: Devonian, Triassic, and Quaternary; interactive exhibits with more than 650 specimens are on view, including the ancient skeleton of a woolly mammoth. 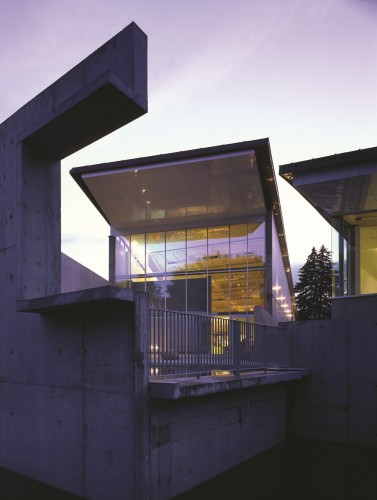 The museum is organized into two parallel buildings – a public education wing and an exhibition wing – that are connected below grade. These structures are defined by a series of poured-in-place concrete walls, aluminum curtain walls, and standing-seam copper roofs cantilevered over the two wings of the museum. The partially buried structures define the edges of a cascading plaza, extending views to the lake and the surrounding landscape.

The project incorporates an

innovative water-management strategy where a series of linear water terraces teamed with landforms create ten-foot-high landscaped berms to conceal four distinct parking areas. Precisely graded, the parking areas divert groundwater runoff to bioswales with gravel filters and reintroduced prehistoric grasses such as equisetum, cleansing the groundwater of chemicals and other pollutants. Channelled into the linear-stepped and stone-lined terrace, water is directed between the two museum wings, where it collects in a reflecting pool. Excess water fills the pool until it overflows into a new wetlands detention basin that calibrates the release of water into nearby Lake Cayuga. 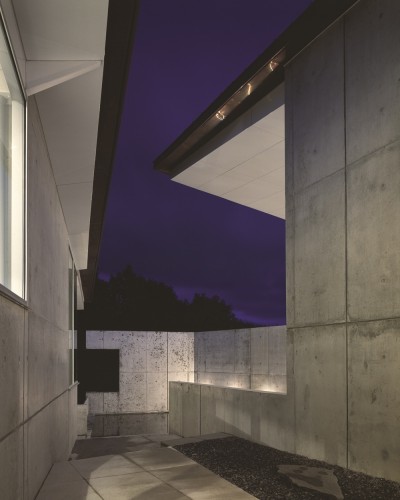 The below-grade exhibition hall also benefits from thermal insulation achieved by embedding both wings of the complex deep within the earth. Heating and cooling systems for the building are supplemented by geothermal energy provided by two ground-source water pumps that harness energy from fifteen hundred feet beneath the earth’s surface. This energy is transformed into radiant floor heating in the winter and fed into an air-handling system for heating and cooling year-round.

Project: The Museum of the Earth