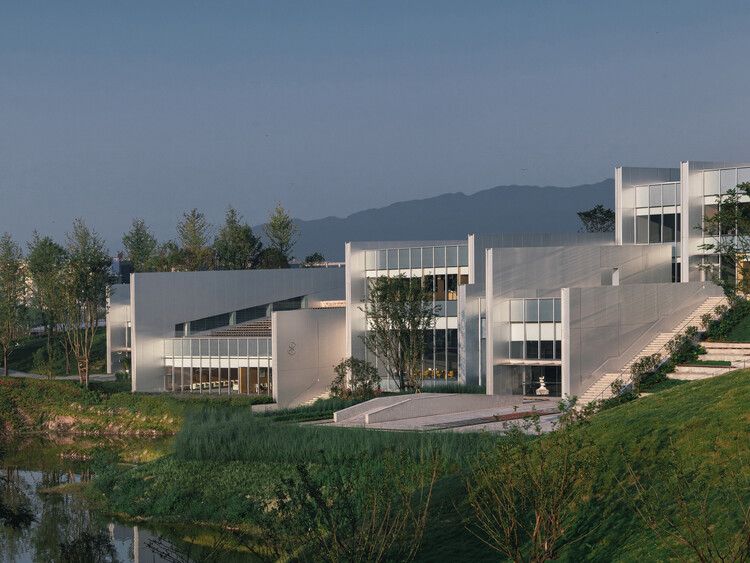 Text description provided by the architects. AI PARK, the pilot zone of Terminus Group’s AI CITY, is an exciting project designed by XING DESIGN, Shanghai. A global leading AI smart service provider, Terminus Group is devoted to high-quality products focused on AI cities, sustainable development, and robotics. As the prologue of AI CITY, AI PARK is an experimental base for urban experiences, Research and Development testing, and human-robot interactions.

“Chips” Inserted into the Earth. AI PARK is located by Fengming Lake in Chongqing Hi-Tech Industrial Development Zone. It consists of a set of chip-like metal walls, which are inserted into the undulating terrain and point perpendicularly to the water bank. These walls integrate robotic ramps, hardware equipment, servers, shafts, outlets, and supporting structures. Labs are distributed in between the walls. Other spaces including courtyards are thus freely organized between the walls as they interconnect, overlap, and share views towards the waterfront. “Chips” inserted into the Earth elaborates the mission of Terminus, which focuses on AIoT (Artificial Intelligence and Internet of Things) and the smart system of regulating and controlling urban spaces.

TACOS (Terminus AI CITY Operating System), being tested and developed in the AI park, is the OS of AI CITY. It also builds the digital twin of AI PARK, which is iterated and evolving simultaneously. Smart space relies on the smart software and hardware industry, the evolution of traditional industries like engineering, and even disciplines as architecture and social management. We, as architects, are also involved.

AI PARK is progressive, experimental, but also “incomplete” because it is designed to be modified and expanded to meet future demands. Here, the idea is turning into reality.

A Journey with robots. Just as walking upright demands the construction of stairs, the way robots move also shapes architectural spaces. Thus, AI PARK implements a series of ramps to ensure that all levels are accessible for robots manufactured by Terminus, which are based on the wheeled axle chassis.

For instance, robot charging stations and robot parking areas are found at the entrance of AI PARK. Visitors are directed by robots to cross the corridor into an enclosed entrance courtyard as if they have arrived at another universe. This journey continues as one enters the building.

A future between architecture, machines, and robots. In 1923, Le Corbusier wrote " A house is a machine for living in" to challenge the conventional architectural ethics. Yet the relationship between machine and architecture is far more profound than a kind of "formal style" or "aesthetic preference".

Nowadays, it is hard to imagine new buildings without HVAC, elevators, water supply, EL&ELV, or network coverage since architecture is heavily shaped by technology and innovation. In the future, technologies like smart space OS, robots, robotized building components will be as common as masonry, reinforced concrete, low-E glass, and escalators. In the future, architecture will be shaped by both humans and machines. Besides being a co-user of space, robots can have an impact in a greater way: to be a part of the architecture. The story of architecture, machines, and humans has just begun. 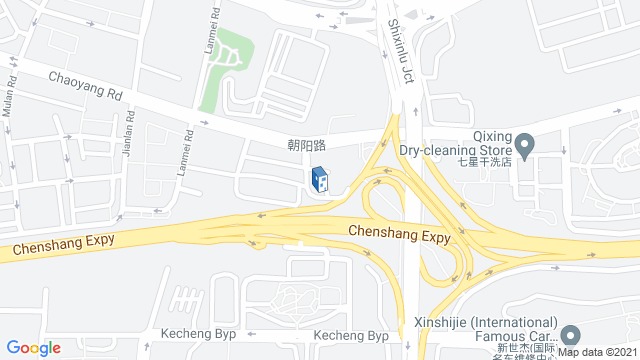 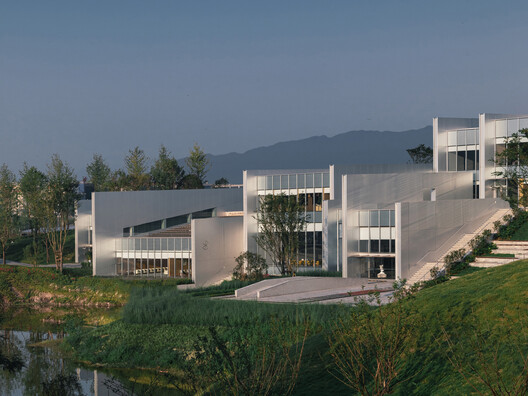