Save
The Chapel of the Last Farewell / Jakub Turbasa + Bartlomiej Pyrzyk 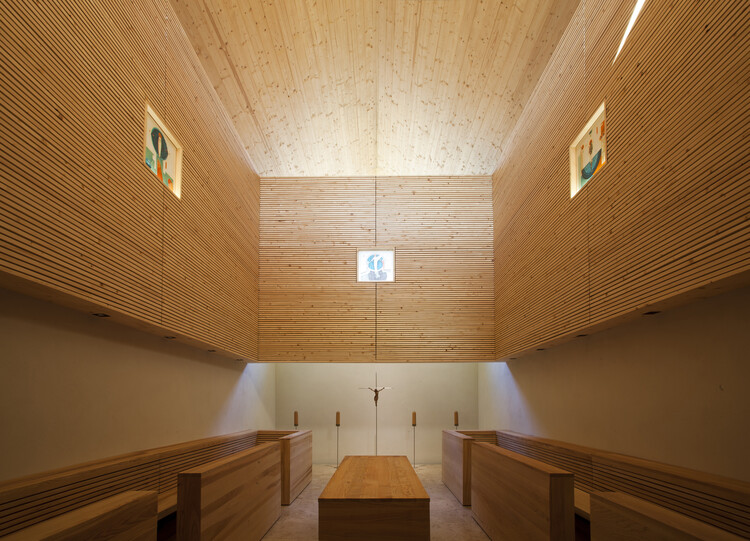 Text description provided by the architects. The design of the chapel was carried out in close proximity to the baroque complex with the minor basilica of St. Nicholas. It was borne out of a desire of the local community and the Franciscans for creating a suitable last farewell venue as a means of continuation of the age-old, slowly passing, tradition of bidding farewell to the deceased at home. It is located at the old cemetery, in its new part.

The simplicity of architecture derives from the archetypal, traditional forms of chapels with gable roofs, constituting their contemporary reinterpretation. The chapel's architecture is characterized by the selection of natural materials such as wood or stone. The contact with noble and natural matter opens a person, through their senses (touch, smell, acoustics, etc.), to the multidimensionality of space as well as to a more profound cognition and experience.

The block consists of two parts that adequately express the function related to the spaces of sacrum and profanum. The first one refers to the place of prayer - the chapel, which clearly communicates its destiny by a distinctive form. The second one, covered with greenery, rises from the ground along a delicate arch, encompassing the accompanying rooms such as a place with cold storage for the bodies, technical rooms, a utility room, public toilets, etc. The project of the chapel combines two traditions of constructing Christian sacral buildings: the concept of the way - that is, moving in stages from the world of the profanum towards the place of the sacrum; and the concept of place - realised by the central layout of gathering together in prayer.

The design concept echoes the memory of the so-called "Paschal path" - i.e. the last moments of Christ's life - from the Passion, through death, to resurrection, which was symbolically expressed in architecture. Stage 1 – Passion. After crossing the threshold of the chapel, a person finds themselves in a vestibule filled with darkness. Reinforced concrete walls and the ceiling are black, which aims to emphasize the impression of immensity, infinity, and "immateriality" of a place where all contours are lost. The severity of this place expresses the stage of the aforementioned Passion - loneliness, suffering, Jesus' prayer in the Olive Garden.

Stage 2 – Death. At the end of the chapel's perspective and also at eye level, you can see a filigree cross that expresses the next stage - i.e. death. Stage 3 – Resurrection. Through the zone of darkness, we enter the actual zone of prayer. This bright space symbolizes the hope of the Christian vocation (according to the Christian faith, life does not end with death). In the place where people gather around the body of the deceased, their attention is not focused on the reality of death (i.e. the cross and the deceased person), but is directed towards the perspective of eternal life. The architecture of the interior naturally guides the gaze upwards and towards the light. The icons by Greta Leśko present a little taste of this reality. 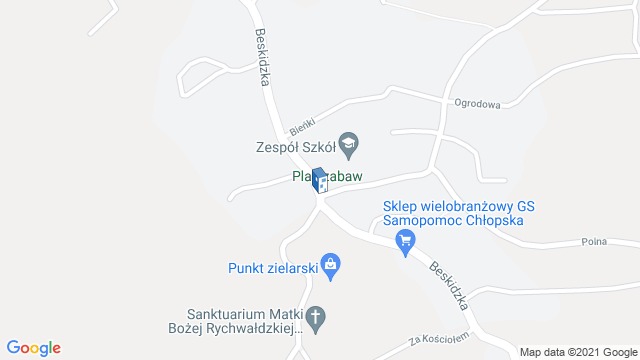 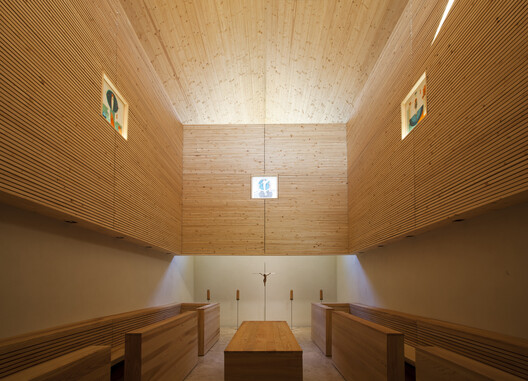