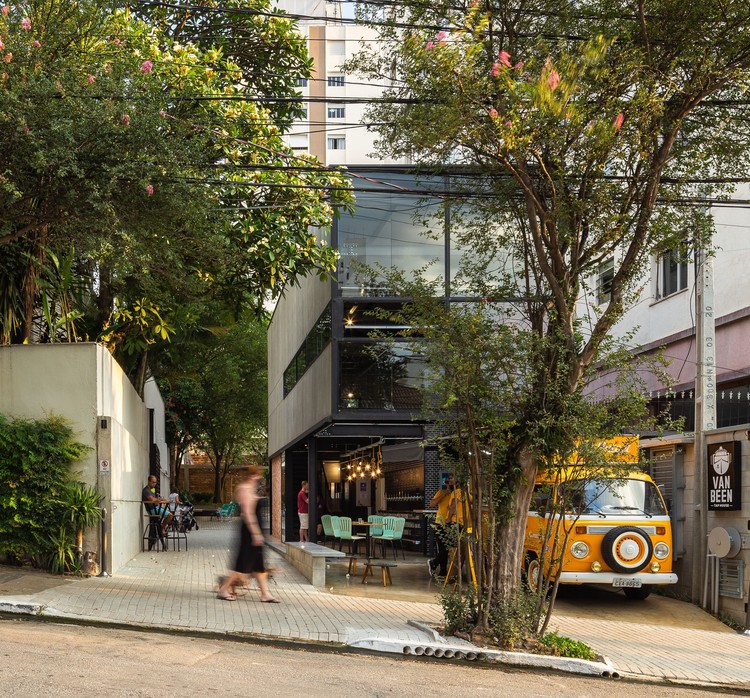 Text description provided by the architects. The Van Been brewery was designed to offer fluidity in its indoor-outdoor space relationship, based on the idea that the consumption area, sidewalk, and open spaces could be merged into a single environment, adding value to the commercial spot and somehow adding value to the neighborhood. For that, we opted for the metallic structure as a structural system, which allowed us to work with an open space on the front façade, creating a pillarless space close to the building's entrance, with full circulation between the interior and the external areas.

The set of glass frames was designed to reinforce this concept, exploring the openings on the ground floor. A continuous side door and two large front folding doors remain open during the house's operation, opening the cold room and lounge area to the external and access areas.

We worked with the metallic structure in this building, using two regular modules of 6.00 by 4.50 meters and a third frontal module of 3.70 by 4.50 meters. Thus, we seek to bring aesthetic lightness to the set, in addition to adding rationality and speed to the construction process, an important factor when dealing with commercial work, with normally tight deadlines for completion. The adoption of this structural system also helped to reinforce an aesthetic concept more focused on the industrial sector, something desirable when dealing with a craft brewery with its own production.

In order to make the work more agile and economical, we agreed with the client on a very streamlined use program, grouping the beer taps, cold room, table space, bathrooms, bar, and a small storage room on the ground floor. The upper floor is occupied by an open hall, with infrastructure ready to house a craft beer production space in the future (which is currently made in another location).

Regarding the external finishes, we used a mixture of facing bricks on the ground floor, something that refers to traditional Dutch architecture, the land of origin of the owner family and which gives the brewery its name. On the other hand, the upper floor was entirely covered with cementitious plates, modulated following the structure's intervals, and which once again bring the industrial aesthetics to the fore.

We sought to establish design elements that would also add value to the urban environment, following beneficial experiences we had gained in other commercial projects. In the case of Van Been, urban niceties came in small gestures such as the continuous stone bench (blasted granite) projected next to the sidewalk, the generous and open front setback to the street, and the specification of an artistic mural that runs along with the double height of the building hall, being visible to the visitors and to those who circulate on the street.

Another important element in this context is the open space at the back, which is almost like a small-scale square, grouping spaces for benches integrated with the landscaping remaining in the lot. Initially conceived as a parking lot, throughout the project's maturation process the space was converted into an open area for general use, becoming a spot for neighbors and patrons to have a beer outdoors or simply walk their pets. 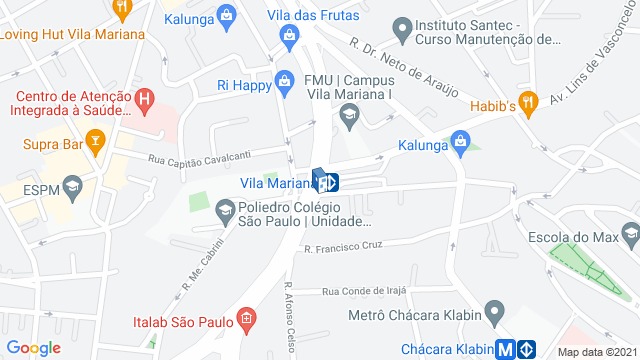 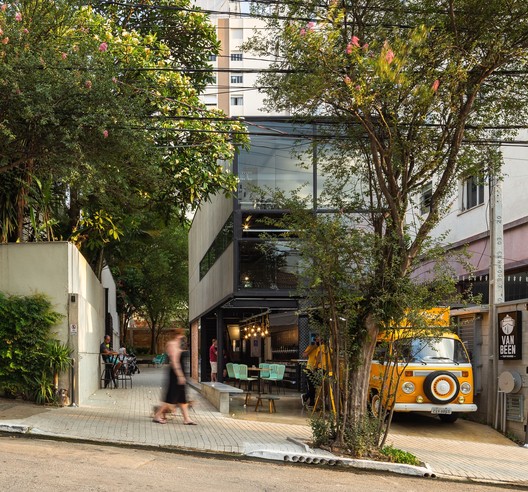