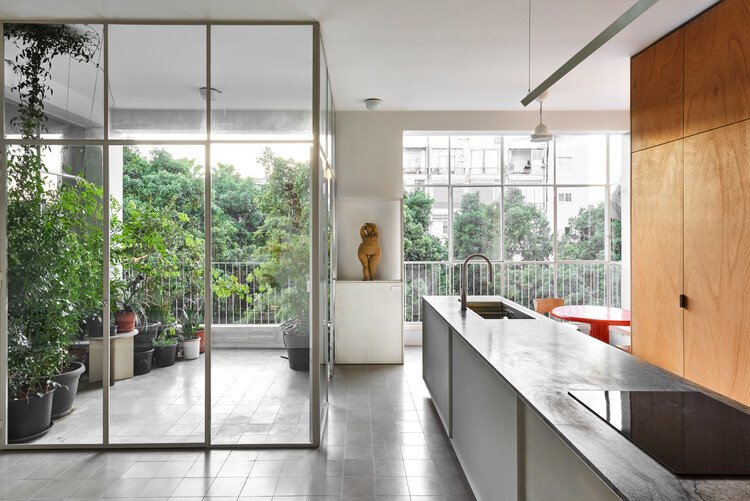 Text description provided by the architects. The apartment on Sderot Chen (Chen Boulevard) in Tel Aviv has an area of 130 square meters, and is located in an apartment building which is part of a continuous urban block. The apartment is located on the fourth floor, at the height of the boulevard’s treetops. It has not been renovated since the 1950s.

The apartment is almost square in shape, and its eastern and western sides have many large openings both to the boulevard and to the block’s inner courtyard. The main division separates the apartment’s private spaces from its public areas. The public spaces face west, toward the boulevard’s trees, through a number of large windows. The private rooms are set in the rear of the apartment and face the inner eastern courtyard.

The apartment was originally designed with two elongated balconies: one parallel to the tree- lined boulevard, and the other parallel to the inner courtyard. This was intended to protect the interior space from the heat and the strong eastern sun, but also prevented direct access to the front, allowing for only two bedrooms.

We decided to change the size and shape of the balcony, extending it in as far as possible to the inner depths of the apartment. This allowed us to bring the greenery and a sense of the outside into the apartment’s interior. The balcony took on a square shape, like that of a patio, and now divides the public space in two: the living-room and the kitchen. The kitchen, which was previously a separate, closed, room at the rear, is now part of the public area of the apartment, located next to the boulevard.

The apartment boasts a variety of materials: part is wood-faced, and part makes use of industrial materials. The extensive surfaces of the materials were treated to highlight the character of their specific material. The significant wall in the apartment, parallel to the tree-lined boulevard, is a wall built of wooden pallets, with delicate paint-brush strokes in various shades of white. We were looking for a way to create movement in the long white wall, a subtle but significant sense of

materiality, which would otherwise have served only as a backdrop. The low sun in the west flickers on the wall, emphasizing its texture and motion. This long wall includes the library, made of industrial-grade bent aluminum shelves. Aluminum was also used as a surface by the sink. All the cabinets – both in the bedrooms and in the kitchen – are wood veneered, in different tones with minimal detailing. In this manner, the large material surfaces are showcased with subdued colors. 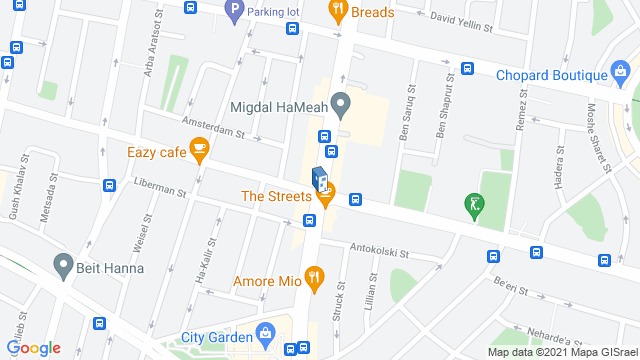