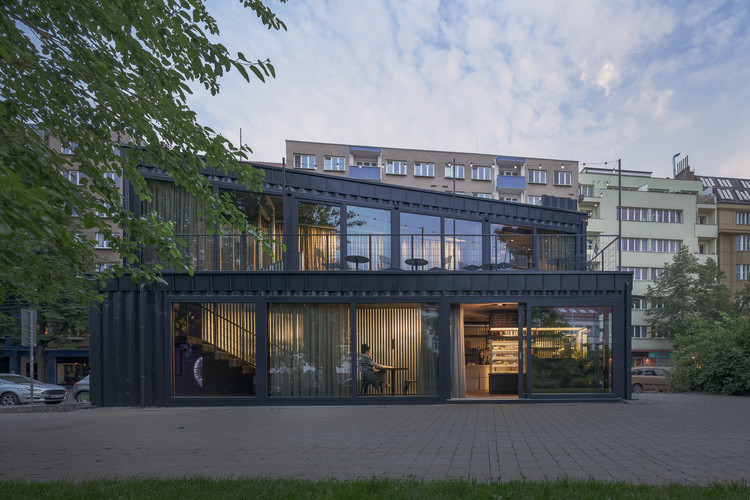 Text description provided by the architects. In the heart of Prague 7 - Holešovice, a temporary building from recycled shipping containers grew on Orten Square. With its rough industrial aesthetics, it refers to the industrial history of Holešovice. Its content follows the current changes in this city district: The rough, black shell hides a pleasant city café which opens up to its surroundings with large-scale glazing in the facade of the aged and used containers.

The building consists of three shipping containers. Two, forming the base of the café, are located parallel to the main street. However, they open their facade towards the park. The mass of both containers is an optical and sound curtain for quiet sitting in the park zone. The third container is an observatory on the upper floor of the café. To observe and to be observed. The landmark on the square is placed obliquely, seemingly randomly, on the other two containers. However, this is a thoughtful move. The rotation creates two terraces with a view of the surroundings and the mass of the container becomes a clear element visible from the main access axes.

The use of a sober color palette and basic industrial materials is accentuated in the interior by a precisely processed, atypical detail. Visitors find themselves at the intersection of two realities: a rough industrial product and a boutique-café. This is also how we perceive the current spirit of Holešovice. Its essence is personified by our structure: like the romanticized industrial heritage of Holešovice, it stands on the border of rejection (older generation) and embracement (younger generation).

The absence of rich, contrasting colors in the interior makes the shades of gray and silver stand out. The textures of the hard surfaces are complemented by the fine fabric of the curtains colored only by the sun and park greenery, entering the interior through large-scale glazing. Sitting with a coffee becomes a dreamy, surreal experience detached from the hustle and bustle of the surrounding streets.

The corrugated steel used in the interior as a wall cladding wittily corresponds to the window curtains. It forms a second curtain hiding the back-of-house, toilets, and technical room. It guides the visitor through the ground floor layout and clearly marks the mass of the staircase.

The cafe is designed for year-round operation and equipped with all the necessary technology, from underfloor heating to a powerful air conditioning unit. Forced air exchange is solved visibly in the form of spiro-pipes, which form a significant design element in the interior and complete its industrial aesthetics. Most of the built-in electrical installations are controlled from a single central panel with switches in the form of a simple, elegant matt-black steel plate, inserted into a galvanized corrugated steel wall. 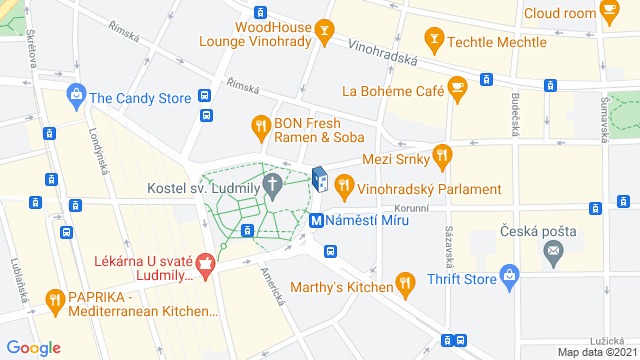 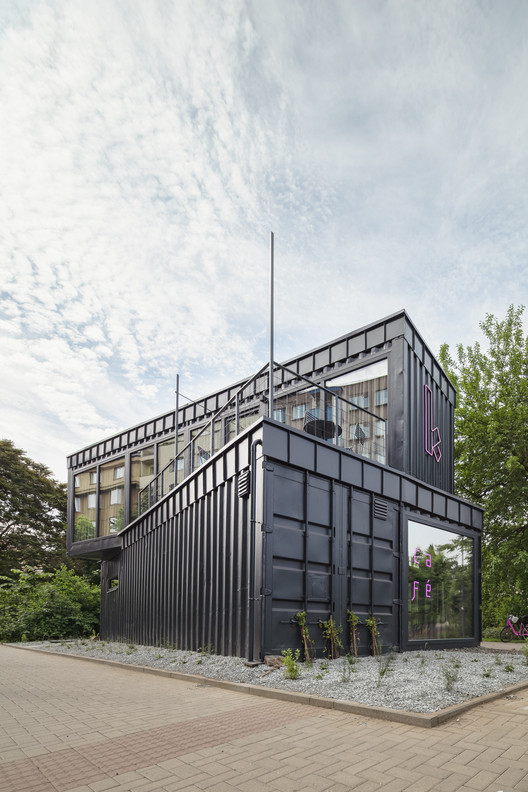 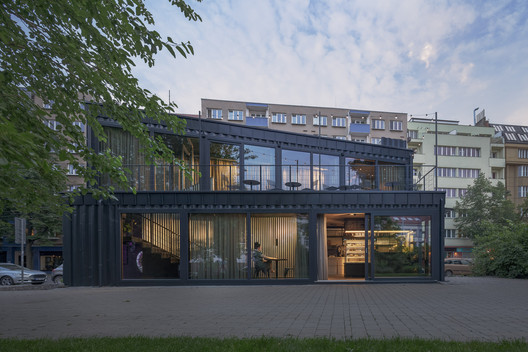