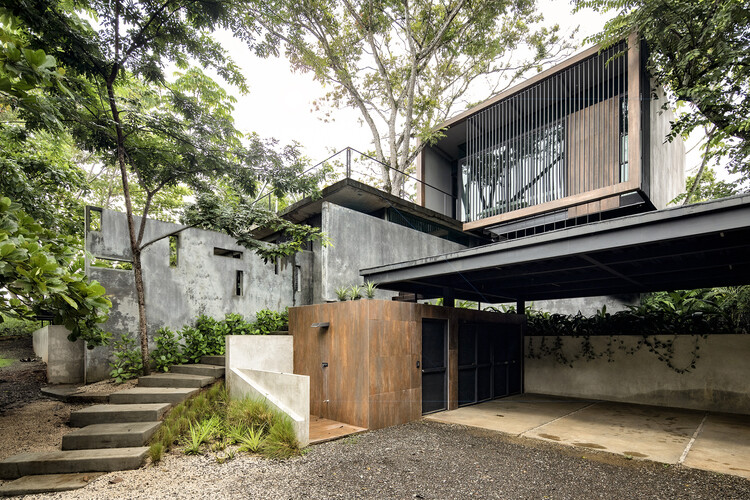 Text description provided by the architects. The house is located in a wooded area in Carrillo de Guanacaste and from the beginning it was considered to conserve the largest number of existing trees on the property. This was a starting point to the integration of the house with its immediate context and concepts such as permeability, integration and the exterior - interior relationship became fundamental in the design process.

The house needed to be safe as it is uninhabited for many weeks a year and be resistant to weather conditions and the sea breeze. From these limitations the idea of brutalist architecture was born, a reinforced concrete shelter with permeable membranes that adapt to the temporalities, the architectural program, and the climate. During the construction process, it was decided to preserve a tree that crossed the social space creating a synergy between the house and this living being, the exterior is lived in the interior and the interior is projected outward... Years later, it was decided to expand the architectural program of the house to incorporate a new guest room that integrates naturally into the existing construction, seeking the volumetric simplicity that the original volume already suggested to us, and that is also integrated into the existing context so that the exterior - an interior relationship is felt in every part of the house.

It is intended that this new volume connects directly with the terrace of the second level and focuses on the tree that rises from the center of the house, so a large opening of the new volume is proposed to focus both: the tree and the predominant view of the site, and which will be protected at the same time by elements that reduce the solar impact on the house, such as blinds and large eaves that also provide thermal comfort to the interior of the room. The materiality of the volume is proposed to create a certain contrast with the rest of the project and at the same time maintain the raw style of the existing materials and feel integrated into the project. Ethos House is a project that seeks to enhance the beauty of the context in which it is located, but also of the materials that compose it, in such a way that the construction techniques were worked on in a meticulous way so each material and finish was exposed in its own pure way.