Nature is always to be found in things and architecture - and it is exciting, aesthetic, and astonishing. This is especially apparent in the exhibition of Gerhard Schönnenbeck's photographs of landscape shots, juxtaposed with architecturally impressive objects that were perfectly staged with zinc cladding panels developed by RHEINZINK.

In their series “Inspired by nature,” RHEINZINK presents these reflections that Gerhard Schönnenbeck captured so well with his camera.

The spectacular sandstone waves of Antelope Canyon in Arizona are a downright mystical place and a popular photo opportunity. The gorges are reminiscent of the roof landscape of the Vitra Design Museum in Weil am Rhein. The façade and roof of the dynamic building were clad with bright-rolled RHEINZINK-CLASSIC. Over time, a velvety, blue-gray patina forms on the original and natural surface, which perfectly combines tradition and modernity. Nature still provides the best design templates.

The distinctive “Old Man of Storr” rock pin on the Scottish Isle of Skye is the island's landmark. It's easy to see that the magnificent volcanic rock formation resembles the Transport Museum in Glasgow, which impresses with its sensational architecture with complex building geometries. Façades and roofs are clad with RHEINZINK prePATINA blue-gray. Maintenance-free, durable and 100% recyclable, the material is inspired by nature and connected to it in a sustainable way.

One of the most bizarre rock faces that nature has created over millions of years is located in the border area of ​​Utah and Arizona, in the Coyote Buttes North. To protect this formation, only 20 people are allowed to enter 'The Wave' per day. The fascinating wave shape is also reflected in the unusual and idiosyncratic design of the Transport Museum Glasgow, which was realized with RHEINZINK prePATINA. The surface is easy to shape and impresses with its elegant aesthetics, while the requirements of sustainable building can be met without hesitation with this natural material. Care and maintenance-free, with a lifespan of several generations and an exemplary ecological balance, the material also serves to protect nature.

Like the icebergs in the untouched nature of the Antarctic, Mickiewicza University in Kalisz, Poland, rises above the campus. The choice of material fell on the pre-weathered surface RHEINZINK prePATINA slate gray - a material that is not only durable and maintenance-free but also gives every building an attractive aesthetic. Similar to the fascinating polar ice, it shines in the sun or reflects the clouds in the sky.

The mysterious stone balls, the Moeraki Boulders in New Zealand, are a popular tourist attraction. They were formed several million years ago and the sea is still exposing new fascinating domes. More than 40 domes also adorn a terminal at Alicante Airport in Spain. Roofs and façades were clad with the timeless surface RHEINZINK-prePATINA in blue-gray, a material that impresses with its freedom from maintenance and durability. Thanks to its high-quality properties and an environmentally friendly manufacturing process, including recycling, RHEINZINK's ecological footprint is good over the long term.

One of the most distinctive features of Utah's Arches National Park is the intriguing Balanced Rock, with a 15-meter-tall rock that calmly defies gravity on a base less than two meters wide. Another landmark is the 57-meter high tower of Edinburgh Airport with its unusual geometry. By cladding the building envelope with RHEINZINK prePATINA, the tower can also face climatic influences as relaxed as the Balanced Rock can. In order to stay in balance with nature, the surface impresses with its 100% recyclability, freedom from maintenance, durability, and low CO2 emissions during production. 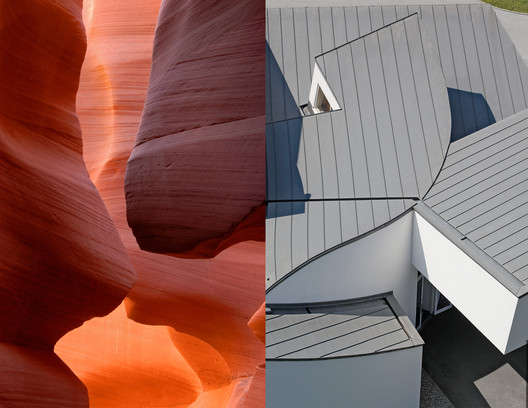