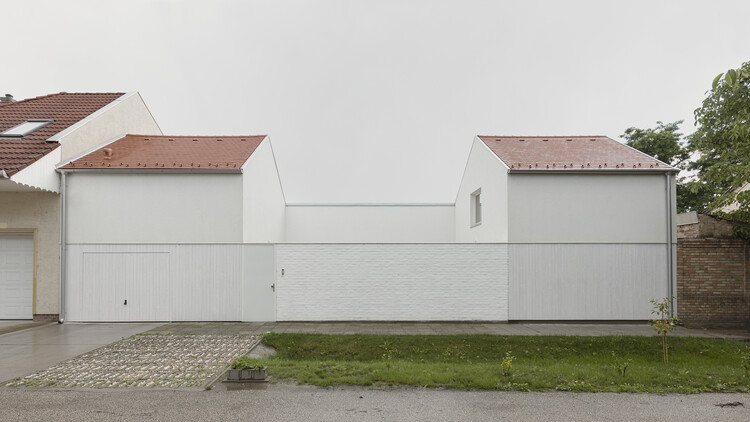 Text description provided by the architects. A new house appeared with its white puritan facade last year on "Arrow" street in Alsóváros, the old district of Szeged. A building capturing and surrounding sunlight by its atrium connects the hundred-year-old, disappearing house type and today's urban structure.

Alsovaros is an old district of Szeged. After the big flood in 1879, this part of the city was redesigned and rebuilt with the housing types called "sunshine houses". The most characteristic detail of the typical front-gabled houses is the attic openings, imitating sun-rays in the centrally boarded fronts. It is called the "eye of God", which protects the inhabitants from natural disasters. Generally minimal folk architecture with a pinch of baroque. The result was a rhythmic building line of the streets with their siting perpendicular to the roads.

Decades ago the new regulations called for a closed street line with a minimum building height in order to get a more urban character. The result is a characterless, low-level, and monotonous street view, only a few old buildings remain so far.

The law is the same, however, this new house in this neighborhood wants to bring back a more human-centered scale with the old characters rephrased in a modern architectural language. A simple white house, where the human eye can rest among the jungle of styles and shapes. The notion of the sunshine house is brought back with a sun-court allowing the possibility of front-gabled elevations and the old rhythm of the streets.

The house has a dual behavior: it is closed to the street but opened inside for a sunny, transparent space, like the typical old houses in the Great Hungarian Plain. Only the window of the upstairs studio allows insight from the streets like an "eye of god". Entering the courtyard the building opens up. The sunlight atrium organizes the whole house. The common and intimate spaces are separated clearly. From the south, a modern porch protects the house from the quite warm summers of Szeged. The duality of the south garden and the northern atrium serves the inhabitants all year long.

Approaching the house from the street, interesting details are constantly revealed: the rethought composition of the typical materials of sunshine houses unified in white where a rhythmic sequence of the sunlight plays on the facade.