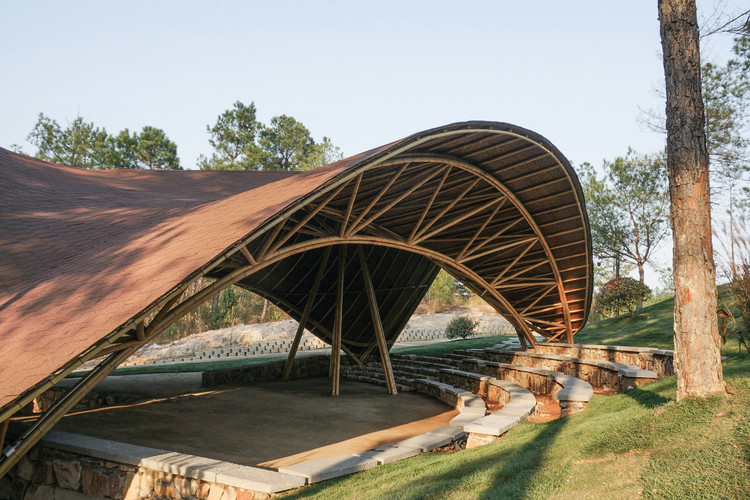 Project Introduction. Wind Pavilion, a bamboo-structured building located at the Longshanyuan in Anji City, serves tourist as a place for the rest, a small group as an accommodation for performances and a company as team building events. The design captures various landscapes characteristics from different aspects and uses bifurcated herringbone sheds as the spatial prototype. With fully explored bamboo’s potential structure of composite and information, we proposed originally a composite configuration of string-supported bamboo beam and side arches, which greatly reduces the amount of frames landing on the ground and realizes a curved surface with lithe and coherence. When the wind blows, the eventual space seems like a expensive canopy, evoking people’s initial feeling of being protecting from nature.

Site. The site is selected on a slope with public potentials and next to a divergence. The main road is a 5cm wide packway connecting the Humanity Park and Natural Heritage Park along the east-west direction. The divergence is a 3cm wide path, which connecting a terrace on west side for barbecues, and a orchard and fields lower on the south side. The base is low in the west and high on the east side. The slope on one side of the road is approximate 13%, and the absolute height difference is about 3m. The inter ground in base is partially flat, with obvious steep slopes in the east and south part. The design hopes to conform to the terrain, in order to maximize the use of existing landscape resources and create a open continuous architectural space.

Concept. The conditions of the site and structural characteristics of the bamboo-inspired the initiative intention of the space. The bifurcated herringbone shed covered with a coherent curved roof on the undulating terrain, open to different sceneries in three directions, which like the canopy blown softly by the wind. The structure is integrated and optimized using the geometric characteristics of the bifurcation, and use chord beams and composite components to minimize ground columns within the maximum possible, in order to ensure a comfortable experience of walking. The height difference of the site is actively organized into the internal space, forming two activity spaces with one high and one low, which are connected by a diagonal shortcut. The basic composition of the ultimate design is completed together by covering, framing, and terrain.

Structure. The main structure is composed of string-supported bamboo beams, herringbone columns and side arches, which are distributed on the central axis and edges of the spaces. The covering is regarded as a secondary structure to play a role as a tie. The vertical supporting structure is the herringbone column. With the column feet diverging to herringbone type, the structure resists vertical and lateral loads. As the horizontal spanning structure, string-supported bamboo structure realizes a column-free space with a diameter up to 14m and supports the concept reducing structures on the ground. The three side arches bring sceneries from different directions into inner pavilion, meanwhile when the body passing through or staying still, the space provides an intimate scale connection in a open space. The side arches on the west and north are composed of multiple member of bamboos, forming a opening corresponding to the orchard and fields on the south side and the main road on the north side. The side arches on the north use bamboo trusses achieving a 16m spanning small theater without a column and solve the problem of length limitation for per single bamboo purlin.

Terrain: Ramp and Terrace. The slope is crossed by an oblique path, connecting two main activity platforms, absorbing moving lines from all directions, and tightly tying spaces together. The elevation difference is set as 1.2m, which allows the vision looking through different areas easily. The lower recreation platform is close to the barbecue platform and path leading to the fields. Combined with the retaining wall, the operating table and benches are set up to become a resting place which can be used as a connection with nearby venues.

Terrain: Theater. The theater is located on a Leigh-elevation platform. Combining with the steep slope of the southeast side, a ring-shaped seats are embedded in the mountain and conforming to the terrain, the theater which can accommodate around 100 people, are formed. The steps are seats as well, form which people can walk up to the hill and look out over the fields.

Details. According to the requirement of space and structure, Wind Pavilion designs and uses 3 levels of components. The geometric and positional misalignment combinations which are among different components promotes the free form of the roof and the dynamic spatial feeling in inside.

What dominates the whole part are string-supported bamboo beams and herringbone columns. In order to implement a central diameter about 14m large space without any columns, the upper chord of the beam uses 6 spliced bamboos, and lower chord uses 12mm steel cables and 80mm steel struts. Every herringbone applies ten 10cm Moso bamboo. The second level components are 3 side arches, which support 3 sides of the roof. The arch with smaller span(8m, 12m) are spiced into bundles by 3. The side arch which on the other side of the theater has the span of 16cm and uses a way of spatial bamboo truss. The third-level components is the roof purlin, which directly lays with 8cm hot-bent Moso bamboo. 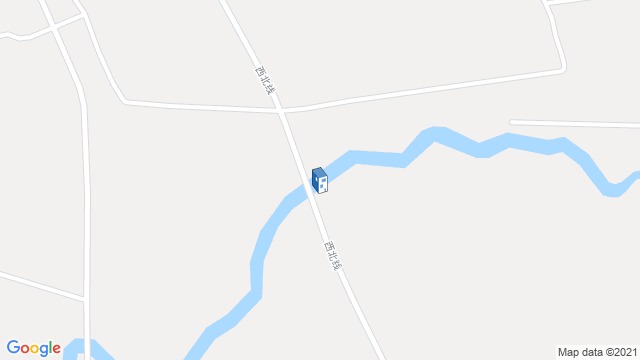 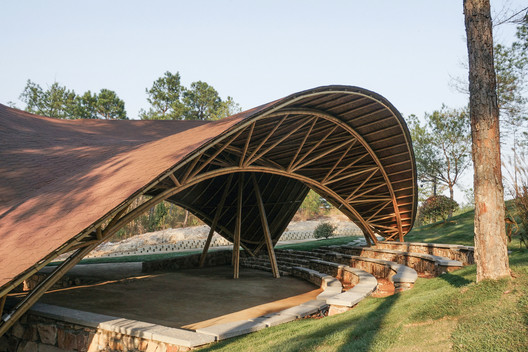