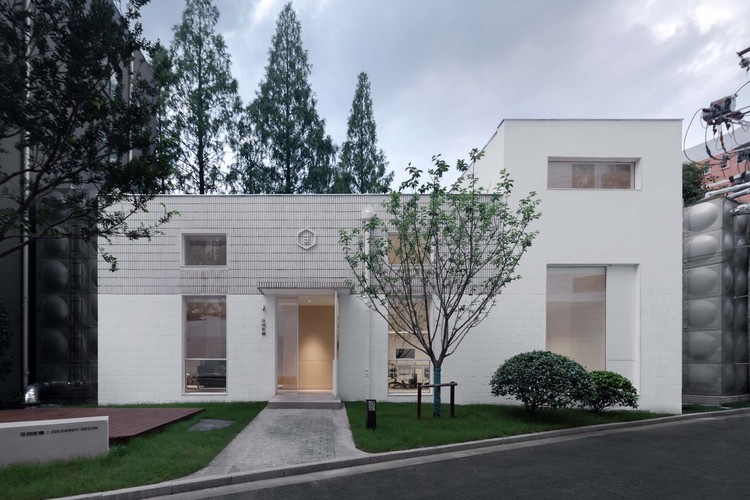 Text description provided by the architects. The project is located in the northwest corner of Jinji Hongwu science and Technology InnovationIndustrial Park, in Hongmiao 1st lane, Gulou District, Nanjing, adjacent to Yinchuan River and Nanjing University of Finance and economics. It is the former site of the Jinling machinery factory. After the relocation of the factory in 19 years, the plot was transformed by the Jinji group into a science and technology industry cluster in Gulou District. The renewal of historical industrial remains in the old city is also an important research direction of FANAF.

The building was originally the power distribution room of the old plant, which was planned to be used as a single building after the transformation of the park. In view of the aging of ceramic tiles and the falling off of wall skins, the owner invited the project team to carry out the overall transformation design of the building. The façade renovation strategy does not pursue “popularity”, it is more restrained, and basically retains the original building shape and color. The façade is divided into three different textures through different processes of German STO exterior wall paint.

Human body size range: thin roll coating, retaining the texture of the tiles; six-meter high size range: thick spraying to maintain a sense of bulk; the rest of the area: polishing and cleaning, retaining the original tile color. It makes people feel no sense of distance, is very kind, and perceives new vitality on the basis of perceiving the past history. The three textures also allude to the state of separation of indoor spaces. The building was originally a brick-concrete structure. Due to the previous demand for power distribution equipment, the building was divided into a four-meter space and a six-meter space. The middle partition wall is a brick wall, which does not serve as the main structural function. In order to improve the overall space utilization, a structural reinforcement design was carried out, and partitions were added to open the partition wall between the two spaces and create new spatial connections.

The layout continues the original building entrance relationship. Behind the entrance, the background wall is the equipment and service area and the internal space is divided into the leisure reception area on the left and the office meeting area on the right. The original wall under the window was canceled to expand the lighting surface and increase the interaction between indoor and outdoor. The outdoor courtyard follows the edge shape of the road and the building and forms an outdoor resting space with high and low walls.

The low entrance and reception area, and the slightly lower floor height give people a feeling of "want to sit down" and provide more comfort. Large-scale ceilings are set up in the lobby and meeting areas to hide the air conditioning and fresh air equipment; at the same time, the changes at the top also open up the rhythm with the office area. The floor height and layout of the reception area are closer to that of residential buildings, which makes the space feel like a family. The retreat of the suspended ceiling at the high window also increases the connectivity between the reception area and the outdoor courtyard, which is different from the traditional office impression.

The right entrance is the office area, the whole is mainly functional, concise, and clear. The red horizontal structure and cylindrical vertical structure become the visual focus of the space. After the partition wall is canceled, the original concrete beams are replaced by I-beams, and the concrete columns next to the opening are replaced by steel columns. Let the structure become the visual focus of the office space. The partition part is separated from the wall, and the structure is stabilized by a single-sided structural column and a link boom.

Through the design, there is no rigid connection between the wall and the partition, forming a sense of suspension; the gap between the blocks is covered with solar panels to increase the penetration between the partition and the office area. In terms of material and detail processing, birch multi-layer boards are combined with white latex paint to create a minimalist atmosphere. By removing the wall tiles, applying latex paint, and the smooth texture of the whole body, the contrast between the new and the old is formed, and the original structural beams and columns are exposed, retaining the texture of the historical brick wall.

In the process of urban renewal, a large number of residential areas are planned to be built around the remaining industrial parks. After the functional replacement of the industrial park, it is not a single office park but includes various functions such as commerce, office, and leisure. This makes the park and the surrounding residents form a new and harmonious state of symbiosis. 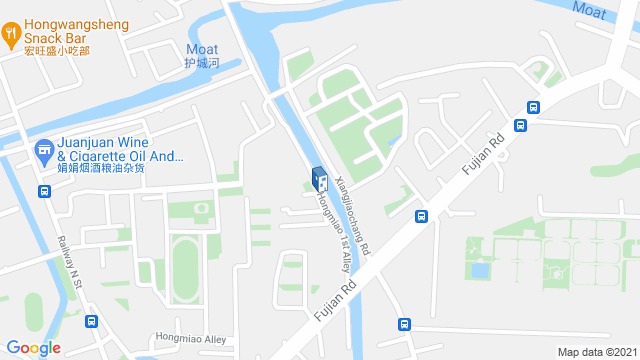 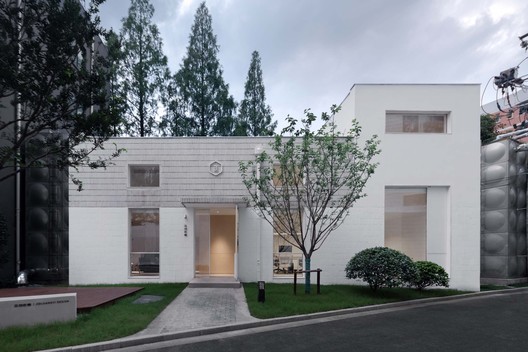