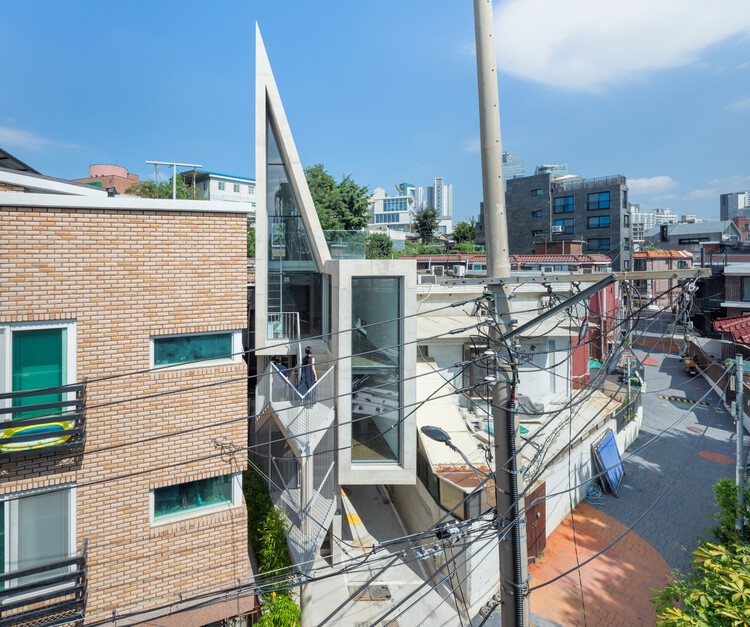 Text description provided by the architects. SOSEUM faces the sky sitting side by side with neighboring buildings. It reached out its hand while standing a step backward from a road. Indifferent from a distance, warm and tender at hand. Soseum is part of your mundane life. Hapjeong-dong borders Han river, where there are many historically meaningful attractions. The subway line no.2 & 6 comes in handy and urban renewal programs are in progress, such as the public park project of Dangin-ri power plant and the alley regeneration project. There are many kinds of decent restaurants, cafes, and cultural buildings like Kyobo bookstore.

In the past, there was a clam(蛤)-well(井) at Hapjeong of which name originated from it. The clam-well was around the current Jeoldusan Martyrs' Site, where executioners used to sharpen the blade with those shells. In 1943, Hapjeong was incorporated into Seodaemun-gu and relocated to Mapo-gu the next year then finally became Hapjeong-dong, Mapo-gu right after Korea’s liberation. Unlike other areas around the Han river, it remains its administrative district up to date.

In 2009, now that the plan to redevelop the site of northern Yanghwa bridge had been declared, it changed into a tall skyscrapers area. Being full of tall buildings around Hapjeong station, you can still encounter small residential alleys. (*source: Mapo-gu Office website).

The site is located at about the mid of the narrow alley formed between Hapejeong station and Sangsu station. In the surroundings, low-rise residential buildings made of bricks form a street atmosphere. On the opposite of the site, Dangin-ri power plant, which has been staying at this place since 1930, has just completed the underground construction and its large outer space is ready to open to the public, however, a boundary retaining wall forms the opposite side of the narrow alley.

It is 5,6 meters by 17 meters, narrow and long, and borders 3m-wide lanes. The facade is rather narrow, while the rear is relatively wide. It remained vacant for long amongst old residential areas. There are 2-4 storied houses around and lately cafes, design offices have moved into. The facade looks to the southeast and the rest buildings around. The rear and right sides of the site are affected by the sunlight oblique line of due north direction. The land is flat with northern low hills nearby.

Extension of a road - Creation of a flexible and vigorous interactive space by expanding the stairs to the public domain.

Open Elevation - Creating a bright street environment by designing the elevation facing the alley into windows.

Control of sunlight - An eave is designed to be adjusted according to the season by expanding the elevation.

The construction was quite tricky because the frontal road was narrow and also the site was long and narrow. It required painstaking effort and the aspiration of engineers.

design strategy 1 - All buildings in residential areas are subject to the oblique line for the right of sunlight in the due north direction. The setback regulations of the right of sunlight stipulate the allowable outermost boundary as well as the maximum volume of the building. All sites, where the construction is available, are different in shapes, orientations, and areas, and thus those all entail the virtual volumes with different shapes that should not be invaded.

Soseum is located in a residential area. We planned Soseum to be a characteristic volume by actively accommodating the legal restrictions applied to it. Both the side of setback regulations in due north direction and the elevation of the building stay with a parallel plane. It was designed to maintain the directionality to the point that such an extending slope and a vertical wall meet together, and to extend it further with no interruption to create the rising volume and peaked inner space.

design strategy 2 - The wall of the Dangin-ri Power Plant is blocking one side of the alley of 3-meter-wide in the site, where Soseum is located, and the residential facilities such as the multiplex houses and multi-dwelling houses are standing in series around the other side of the alley. Most of the buildings standing around the street mainly showed outer walls with minimum windows planned, and it was difficult to find the public spaces for interaction with each other such as parks around them. We considered so that Soseum can be created as a space for flexible and vigorous interactions by giving a breathing room through retreating from the frontal road and expanding the stairs to the public domain and opening the elevation.

design strategy 3 - We planned the Soseum as an open elevation toward the alley. It contributes to a creation of a bright street environment by designing the elevation facing the street to be a wide window. We also designed the eave so that the sunlight can be adjusted according to the season by expanding the elevation in order to reduce the sunlight load in the summer due to the high and wide front windows. 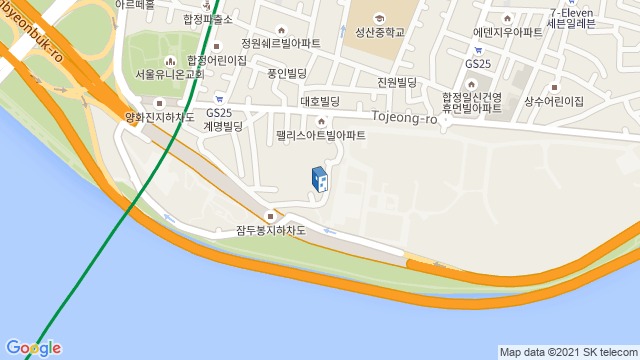 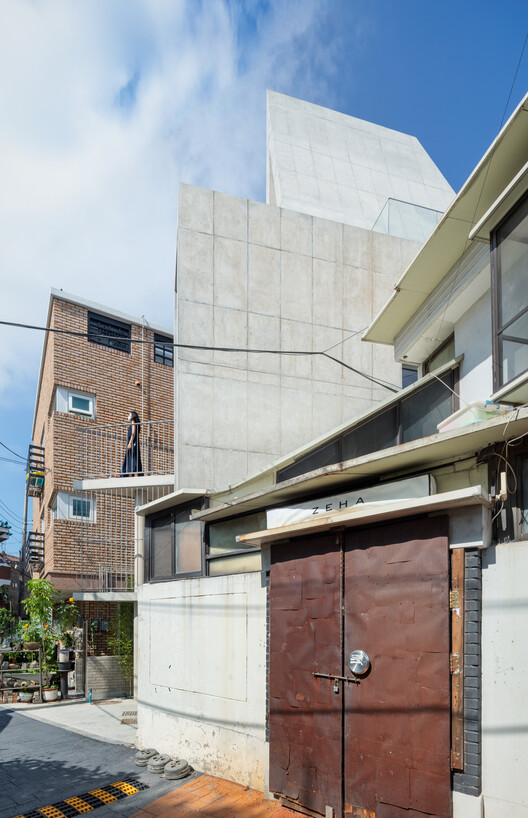 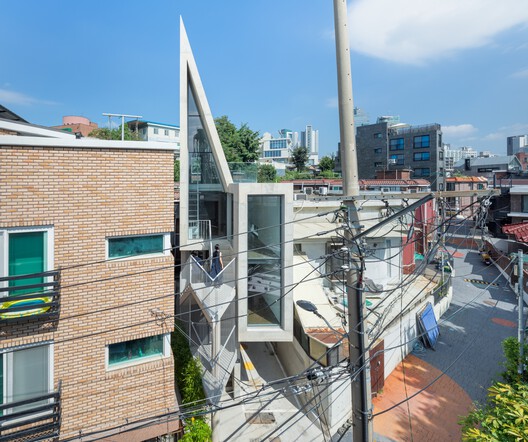