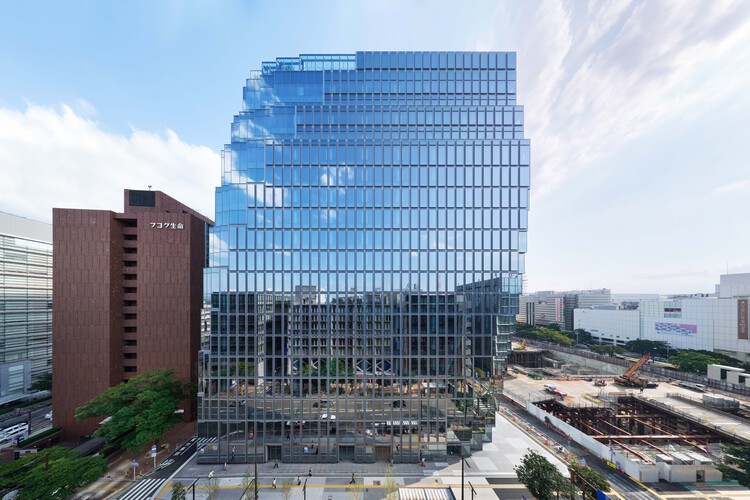 Text description provided by the architects. OMA’s only built project in Japan up until 2012 can be found in Fukuoka. The Nexus World Housing complex was completed more than twenty-five years ago. Local developer Fukuoka Jisho commissioned Arata Isozaki to develop a masterplan that introduces a “new urban lifestyle,” for which OMA was invited as one of six architects to design a freestanding housing block.

Fukuoka is the seventh biggest city in Japan, known for its distinct cultural identity. Its central location among major cities of East Asia positions the city as a gateway into Japan, contributing to its standing as the economic center of Kyushu Island. The city has been thriving over the last decade, ranking highly in livability, a ratio of the younger population, and percentage of start-ups.

Following the Nexus World Housing complex, Tenjin Business Center signals a newfound ambition for urban renewal and growth. It also marks the next generation of collaboration between OMA, the city of Fukuoka, and Fukuoka Jisho. We believe this project was made possible by the fortuitous alignment of three people of the same generation—Shohei Shigematsu, a Fukuoka native; Ichiro Enomoto, the new CEO of Fukuoka Jisho (son of Kazuhiko Enomoto, former CEO who commissioned Nexus World Housing); and mayor Soichiro Takashima.

Tenjin Business Center will be the first development under the mayor’s Tenjin Big Bang initiative to stimulate the district’s formation as an Asian business hub and startup city. We wanted to create a building that is not just a symbol of success but also an incubator and space for discourse that harnesses the energy and activities of the neighborhood. How can we make an office building that suggests a new generation and reflects Fukuoka’s existing urban context?

The site is located at the intersection of two major axes: Meiji-dori—the city’s established avenue of a commerce lined with financial offices—and Inabacho-dori—an organic pedestrian corridor linked to the City Hall Plaza and Galleria and lined with intimate cafes. Below ground, the site connects to a subway station and shopping concourse. The building program is predominantly workspace, within a given massing that is neither low-rise nor tower.

Office buildings are often quite sober and withdrawn from public life. The introverted typology internalizes its atriums and lobbies, shrouding its best assets. Our approach was to excavate the facade on the corner of Meiji-dori and Inabacho-dori to articulate the convergence of two different urban activities. This gesture enhances two conditions simultaneously—they reveal the internal activity of the office and draw in public activity at the new entry plaza.

Within the carved out corner is a six-story atrium that reinforces the inside/outside visual connection and draws natural light down to the lower-level concourse linked to the area’s underground pedestrian, retail, and transit network. The excavation is calibrated as three-dimensional pixels that break down the building to a human scale. The pixelated facade forms a series of soffit surfaces above, activated with signage and lighting that reinforce a sense of place at the convergence point.

Setbacks at the opposing upper level provide green terraces for offices. In respect to the nature in the city, we symbolically introduce terraces with panoramic views to the often-overlooked Naka River and Hakata Bay. Together, the two pixelated edges round out the building to create a sense of softness like that of a melting ice cube.

The eroded corners soften the edge between the public domain and the private office building, generating an openness for the activity along Fukuoka’s main civic and commercial thoroughfares. As the first development in the Tenjin Big Bang initiative, we wanted it to set a precedent for the adjacent buildings to come—activated intersections and plazas at each building creating a network of public zones that knit the new district together. 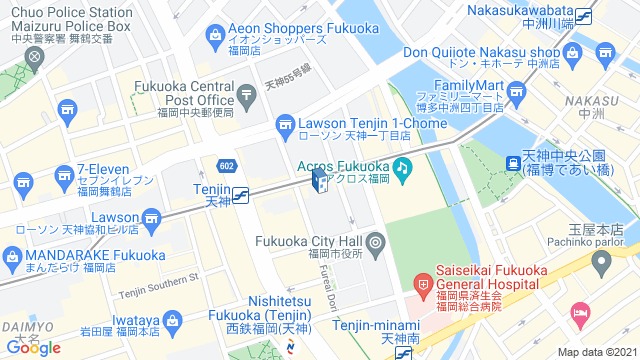 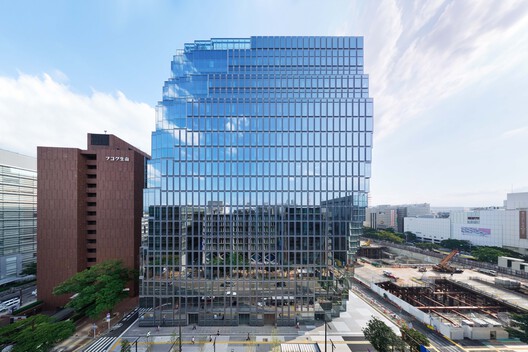