Ennead Architects have been chosen out of a three-part open international competition to design the new International Performance Center in Shenzhen, China. Dubbed 'The People’s Performing Arts Center', the project will be a part of a major cultural development that further marks the city as a metropolitan destination and reinforces the global arts community in the city. 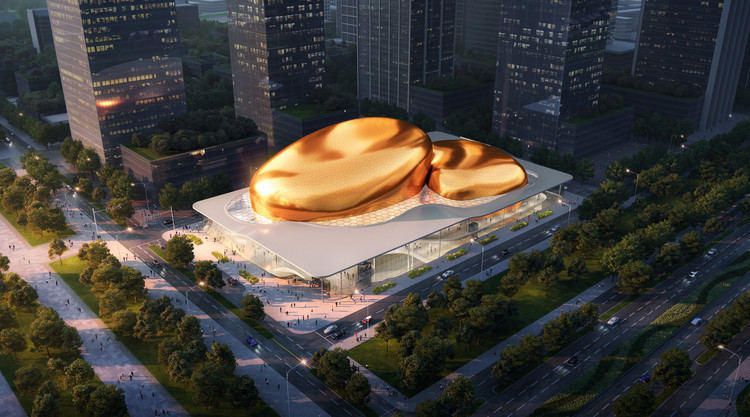 Nestled in the Futian District, the center will be one of three new cultural buildings: the Shenzhen Reform and Opening-up Exhibition Hall and Shenzhen Finance Culture Center, a significant cultural masterplan that will add a community driven factor to one of the world’s leading technology capitals. The winning proposal combines creativity, technology, and intricate design that weaves seamlessly into the city fabric, linking to a new subway station and a network of underground public facilities.

The project consists of two golden egg-like shells that reflect the duality of Shenzhen’s traditions and urban future. The facades create a dynamic layer that changes with the time of day and weather. The organic forms along with the circulation inside, resemble the movement of water in the nearby bay. The lower part of the building creates an open visual flow.

Shenzhen is a place of rapid transformation and incredible energy. When we conceived the design for this city, we wanted to create something emblematic of its vitality that is celebratory and welcoming – the two ‘jewels’ are both expressive of the creative power of performance, and reflective, engaging with the civic life outside. -- Stephen P-D Chu AIA, Principal at Ennead Architects.

The Center will be enclosed by a full height glass lobby, creating an unobstructed view to the city and parks around. The two golden shells will include multilevel atriums the Dream Theater and the Star Concert Hall. The center will also include various practice rooms, rehearsal spaces, and shops, along with a variety of public amenities including a restaurant and an exhibition space.

Ennead Architects have also won the international competition to design a dynamic 32-floor commercial tower in the heart of Shenzhen’s high-tech Nanshan District. The architecture studio’s aim was to create a platform that “embraces creative exchange and the sharing of human experiences and ideas”, so they developed a design that offers a flexible working environment with a subtle use of color and materials, complimenting the spatial and functional needs of Chinese tech company ByteDance. The tower, which is expected to be completed by 2024, will employ co-working spaces, commercial, and recreational facilities in a dynamic-looking structure overlooking Shenzhen Bay. 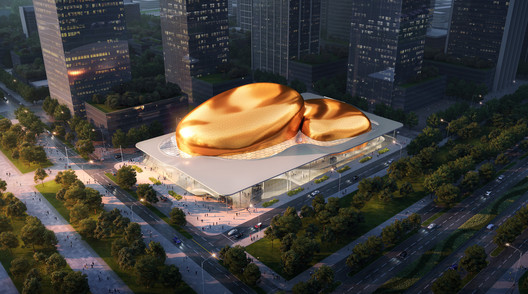