Save
Manta North Ray - Between the Ocean and Volcano / Manta North 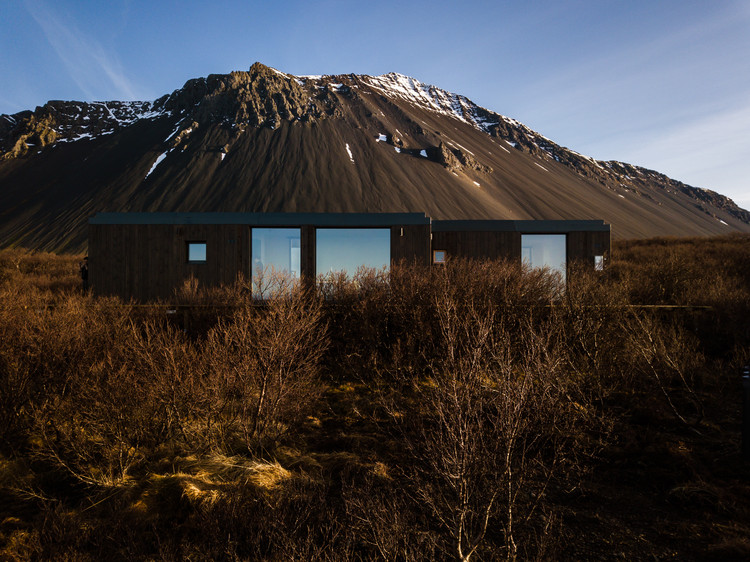 Text description provided by the architects. With breathtaking ocean views in the front and majestic mountain range at the back, this is the most scenic Icelandic location any Manta North building has been delivered so far. The mountain Hafnarfjall is part of an extinguished, 4 million years old volcano surrounded by incredible wildlife and birds. It is also one of the windiest places in Iceland, and sometimes the wind can be stronger than 70m/per second.

House owners decided to have a fully finished and factory-built house instead of building one on-site, avoiding the headache of living through the endless construction process and possible damage to the surrounding ecosystem. Pre-fabricated and built from eco-friendly, renewable, and green materials like CLT - (Cross Laminated Timber) Manta North houses were a perfect match.

Manta North's concept is based on the idea of a well-designed, functional, timeless prefabricated house. Energy-efficient, environmentally friendly, and equipped with intelligent technologies a house can be ordered online in just a few clicks.

From two designs offered by Manta North, the house owner preferred black facade RAY with the flat roof and windows from ceiling to floor. The design of Manta North housing modules, and specifically the RAY module, tackles the usual visual and emotional limitations of small spaces head-on. The external appearance of each module is balanced by proportional and compositional cohesion, which makes room for various spatial combinations between modules. Functional clarity of design allows the user to experience space to its maximum potential. Internal movement axes culminate with windows – visual openings that dismantle the border between the inside and the outside, embodying lightness and an open-minded attitude.

Two RAY modules in sizes 48m2+25m2 were connected with a passage between them size 2x3m creating a total living area of the house 79m2. 48m2 module has a large living room with Manta North fully equipped design kitchen, bedroom, and bathroom. In the smallest 25m2 module, the living room, bedroom, and kitchen – are combined into a single room with a separate bathroom. Houses were settled on the wooden platform that serves as a patio around the house to enjoy summer evenings. Floor heating and timber panels with extra insulation ensure that the house is liveable year-round, even in the coldest weather conditions. The facade of the house is built from thermally treated wood. It is durable and performs excellently in harsh weather conditions and humidity coming from the ocean.

The House owner recalls the day of the house arrival in Hafnarskogur - "We have a neighbor who is a carpenter and was building his own house for some time. In the evening, after a hard day of working on it, he went home. The same evening our Manta North house arrived and was installed in a few hours. We could stay in on the same night. The neighbor's surprise and facial expression were priceless when he arrived at his building site the next morning and saw a completely new and finished building next to his. We invited him in and offered a coffee in our new house”.