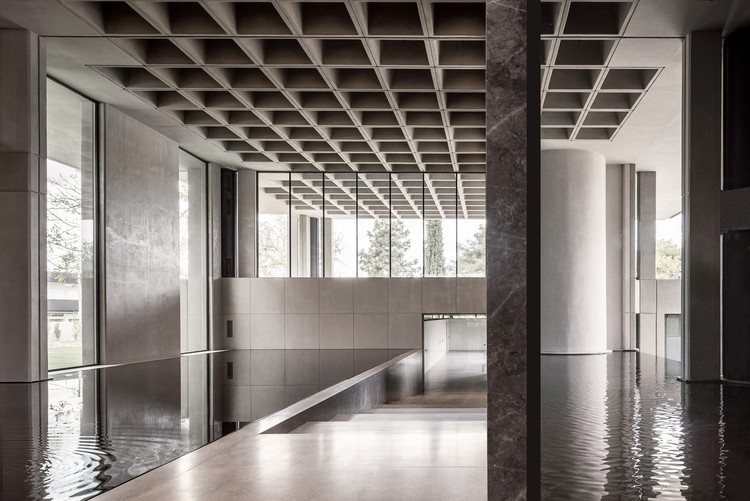 Text description provided by the architects. The existing building is a rare example of the brutalist architecture movement in Greece, erected in 1972, it’s one of the most important works of the renowned Greek architect, Alexandros Tombazis. Its radical renovation started in 2017. The revival of the existing historic building was a moral challenge for us, particularly in terms of the extent of our intervention on the existing structure would be.

The second phase was relative to the overall concrete appearance of the building, a key element to its brutalist character. The last tenants painted it with a beige/yellow color that distorted its original brutalist identity. Furthermore, a large part of the concrete surfaces was heavily damaged

We started with a deep cleaning of all the surfaces and the chemicall analysis of the composition of the original concrete. Finally, we applied a 6mm cement-based skin to the whole building’s concrete surfaces, based on the findings of the chemical analysis and after numerous, on-site, samples. However, within the building’s interior, our goal was not to reduce our design down to a faithful reconstruction, back to its original form. The drastic spatial interior rearrangements aimed at creating a new space that we felt was already always there, within the building’s ‘subconscious, since 1972...

Our intervention was primarily guided by the existing 1.2mx 1.2m grid which corresponds to the dimensions of the modules that make up the waffle concrete ceilings. This grid was the basis for every design intervention applied to the building; all the architectural and electromechanical elements are based on the design, nature, and three-dimensionally projected grid defined by the waffle ceiling slabs.

In parallel, in order to highlight that the geometry of the ceiling is the source of our entire design intervention, any type of mechanical or other equipment was removed, in contrast to the original condition of the building in which the concrete waffle ceiling was covered with various false ceilings and architectural electromechanical components. In conclusion, the previously ‘buried’ waffle ceilings now function as an important archaeological discovery that defines the new morphology of the building’s interior and drives the space «towards an absolute architecture»

The water elements are related to the client’s company profile. They are present in different spaces of the building but have different depths and textures. In the main lobby for example we combined all the elements that present a poetic version of the company’s profile, like the horizon, water, and the sun, always under the strict surveillance of the building’s ‘subconscious’grid. It’s a place that changes continually during the day and through the seasons. An abstraction of nature and architecture. 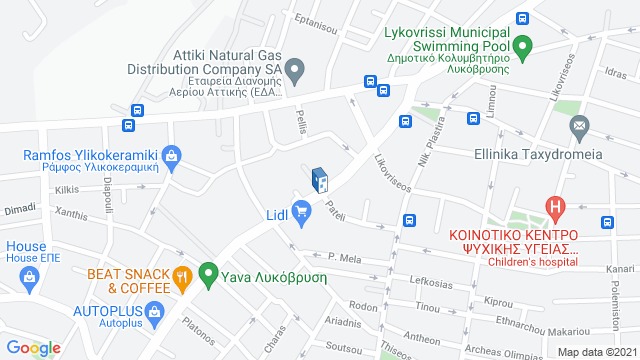 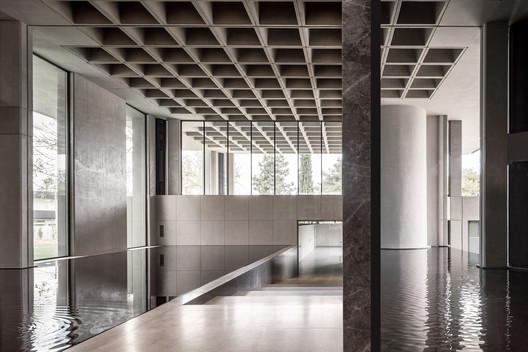