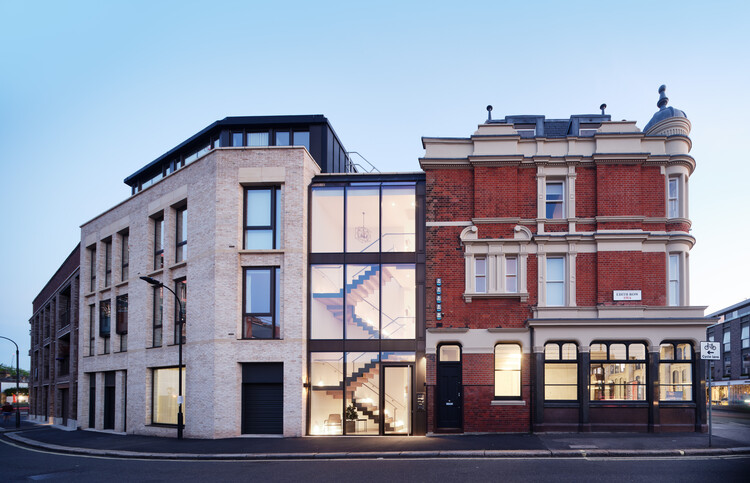 Text description provided by the architects. The former Hand and Flower pub on the Kings Road have been carefully restored and extended by Paul Murphy Architects (PMA) to create a new high-quality, mixed-use development and in its own small way, mend the part of the street pattern.

PMA inherited an existing consent for the site on the corner of Kings Road and Edith Grove and planning permission had also subsequently been granted for the redevelopment of a neighbouring site immediately to the rear of the site, which has allowed the neighbouring developments to collectively contribute to a successful piece of city repair.

The wider area is also undergoing significant change as the former 16 acre Gas Works site just to the south is currently being redeveloped by St William/the Berkeley Group and the National Grid to create some 1800 new homes, renamed Kings Road Park and due for launch from 2022.

PMA were appointed to improve a consented scheme for the site and were tasked with developing the initial design to create a better mix of units, more spacious living accommodation, and additional amenity space. The facade of the existing building was retained and the interior layout completely modified and the completed development now houses five new apartments with retail use at ground floor and basement level.

The form of the building is heavily informed by its immediate context and the design celebrates the dialogue between old and new. Whilst the existing building has been painstakingly restored, the new extension is driven by the specific characteristics of the site to create high-quality residential accommodation and informs a deliberate duality in the treatment between front and back.

The canted site geometry created by the existing street pattern informs a tapered building form on the plan, with a handsome new brick façade remaking the street edge. In section, the design similarly responds to its context and the planning requirement to minimise the impact of the extension on neighbouring properties. This resulted in a faceted rear façade which in turn, creates stepped roof terraces. A glazed link articulates the junction between old and new which encloses with a new timber-clad steel stair winding its way up the building. 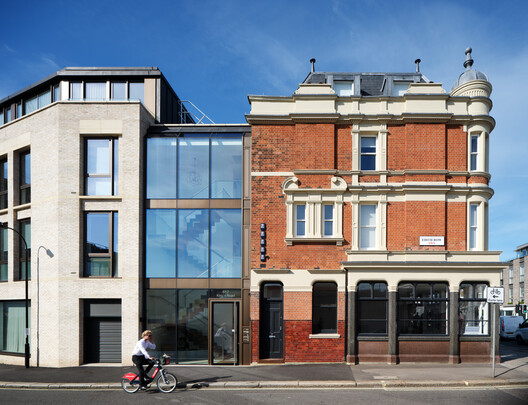