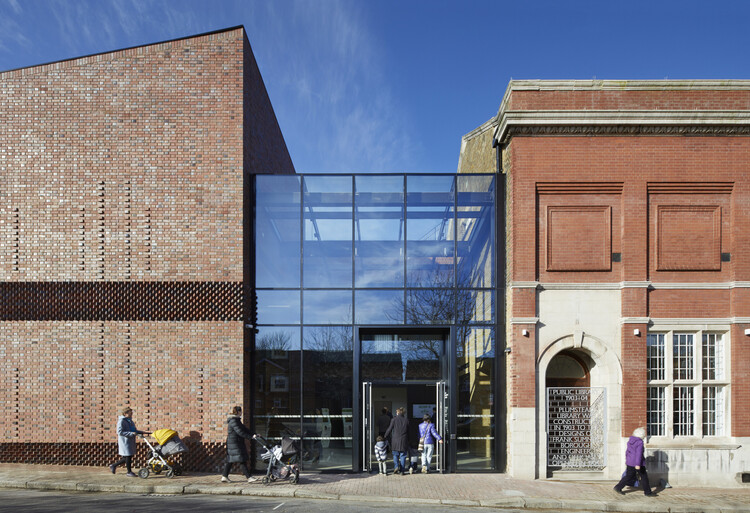 Text description provided by the architects. Hawkins\Brown has transformed an under-used library building on Plumstead High Street into a combined centre that provides public cultural, leisure and sports facilities on behalf of the Royal Borough of Greenwich. New amenities include separate children’s and adults’ libraries, a café, flexible collaboration space, a gym and badminton court, and two large studios for performing arts, yoga, or exhibitions.

The completion of The Plumstead Centre marks the first phase of the Royal Borough of Greenwich’s Urban Framework for Plumstead. The collaborative approach to the project has been driven by a redefined purpose of the ‘local library’, bringing new life to the existing building and creating a new destination for the people of Plumstead.

The redevelopment of the Grade II listed Plumstead Library has preserved and enhanced the historic character of the existing library building, refurbishing the interior to bring it in line with modern standards and provide upgraded amenities throughout. A two-storey extension to the rear of the library building provides a home to new leisure facilities. At the threshold between old and new, a full-height glazed ‘box’ creates a new, level-access entrance that leads to an informal social space that emphasizes the building’s function as an open civic centre.

The extension has been constructed in the same materials as the library: brick, glass and metal are used to create a modern building that is sympathetic, but stylistically distinct from its neighbour. At the heart of the new building, the entrance and ‘book mountain’ provide an informal social setting for reading, working, or simply looking out across the rest of the building. The centre has been designed with openness and inclusiveness at its core, allowing users to look across the full length of the building, through the different spaces and activities, from one end to the other, welcoming all.

Many original features of the library were revealed during the strip-out of the existing buildings and the refurbishment has given them a new lease of life. Barrel-vaulted skylights in the upstairs studio, which were hidden away for over 70 years, have been opened up and now provide natural light within the flexible studio spaces. Original parquet flooring has been restored throughout the building, as has mosaic tiling in the main stairwell.

As well as enhancing the library’s existing functions – with comfortable reading and working rooms and an increase in IT provision – Hawkins\Brown has opened the entirety of the listed building and extension to the public, when only 30% was previously accessible. Services are woven along the existing walls behind 253m of bespoke shelving, allowing the original architectural features to be celebrated. 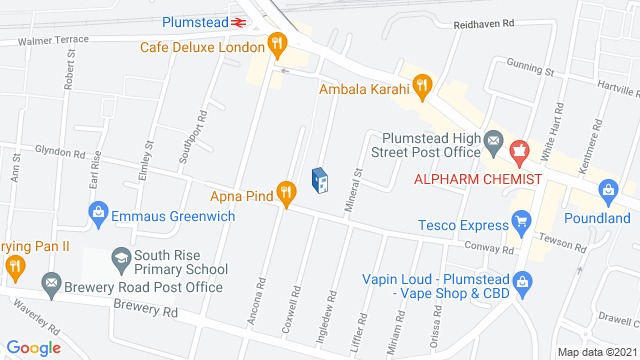 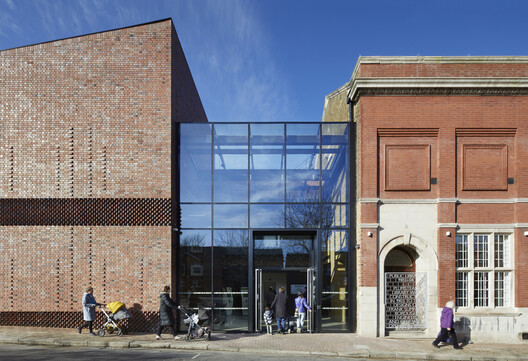