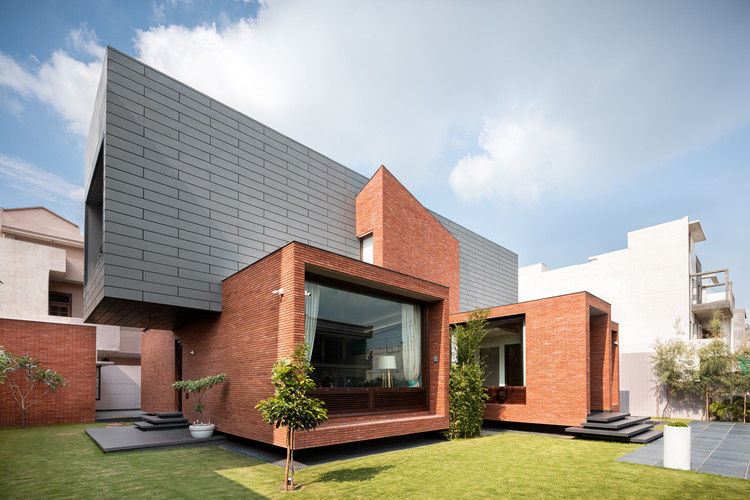 Text description provided by the architects. Located in the small town Shahbad in the north Indian state of Haryana this modern residence on a lot measuring 25mx23m has 2 floors. On the ground floor, there is an Entrance foyer along with a Formal living room, a family lounge. One master bedroom area has a bedroom, a dress, and a bathroom. Another small guest bedroom and a kitchen with an outside sitting deck. The first floor has two bedrooms and a home theatre room with balconies for both rooms. A servant room is on the second floor which has separate access from the ground level.

The house is facing the south side which on one hand brings a lot of heat in summers but also keeps the house warm in winters. The courtyard concept here is extremely important to provide light, ventilation and continuity of environment to maximize the benefit of site. Temperature management through the critical placement of rooms on both floors is the basis of the design. The plan has 2 courtyards that would have been ideally placed somewhere in the center of the house. These courtyards are moved towards the front and rear edges of the house leaving one edge of the courtyard open, allowing the necessary sun, light, and ventilation but curtail the daily effort to maintain the courtyard through the climatic and environmental extremes. This helps protects the interiors from unforeseen harsh temporary weather conditions.

The exposed brick facade reinstates the main tectonics of construction in north India, an area interspersed with local brick kilns all around, and that its usage is still prevalent in almost all the houses that are built in the region. Another major element that becomes a striking feature is the front blank facade which is cantilevered on one side. These tectonics are revealed inside the house in form of round columns in the master bedroom and master bathroom.

Climate and light play a very important part here. Large windows, open light -courtyards, fenestration in form of louvers, the play of sun through the building are some features special to this house. Every room has openable windows that can provide ventilation as per requirement. From the infusion of fresh air by partly opening the window to the concept of cross ventilation for better internal air movement in various climates - all options are available. Conditioned air is available but not mandatory as per residents' desire as an alternate. The blank facade facing southwest is devoid of openings and light and ventilation on the first floor is accessed from the sides and rear instead.

The first look of the brick facade sets up the tone while use zinc sheet cladding as a hybrid material imported from a foreign country ensures that globalization is seen with equity. The facade exuberates the contrasting nature of the material in both styles of construction and texture. Also, interiors have a rich contrast in floor material as there is a change in the functional space.

The overall form is going from modern towards post-modern with straight lines, cantilevers, and linear blocks and yet remains rooted due to traditional planning.  Also, details like the vertical bricks used at junctions of the structure are replaced with a black groove. Plantation adds to the overall ambiance but is restricted to local plants with species like the variety of Bamboo, moulsari, Lagerstroemia speciosa, Indian Tamarix (inspired by Mughal Gardens), etc are preferred so that they can withstand the local climate for a better period. 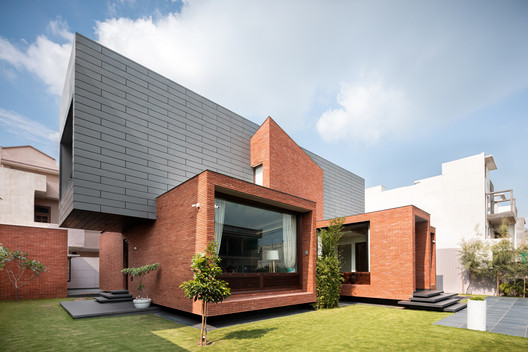