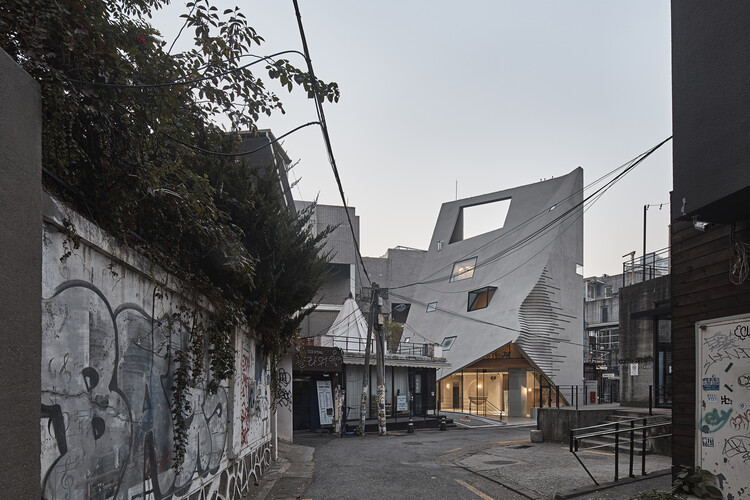 Text description provided by the architects. Hongdae, along with Gangnam, is the most commercially active area in Seoul. An expansive commercial district spans throughout the location with an extensive catalogue of businesses occupying buildings of many types including single- and multi-family houses, shopping complexes, office buildings, mixed-use residential complexes, and galleries, in between streets from every stage of a city’s evolution, from wide main roads to narrow alleyways.

Much of Hongdae’s commercial activity centres around its vibrant arts scene, driven by young artists and independent musicians; a variety of cultural activities, from street performances to murals, take place in harmony with residences and businesses.

This openness, flexibility, and superposition of ideas characteristic of modern art is also beginning to manifest itself in residential and commercial spaces; the repurposing of various places from basements to rooftops as performance and exhibition venues demonstrates how modification, manifoldness, and clever designs have altogether established themselves as architectural features unique to Hongdae.

Areuke Spa is located on an alley in an old residential area at the heart of Hongdae. The site neighbours former residences modified into hair salons, restaurants, and cafes.  In compliance with strict right-to-light laws resulting from the high density of houses, the building, shaped as a tilted pyramid, takes full advantage of the limited space granted within height restrictions.

Being a flagship spa establishment of a cosmetics company, the building was conceived first and foremost with commercial purposes in mind: from the ends of the streets surrounding the site, it grabs the attention of passersby and draws foot traffic to the building with a ground level that has an open, inviting appearance.

In contrast to the lower levels used for product exhibits and skin consults, the upper levels, which are for personalised spa care services, have smaller spaces. The basement level’s high ceiling makes it possible to host a wide variety of events and exhibits, with a hall that fulfills the functions of both cafe and spa. Overall, the levels were arranged in a vertical progression from public spaces at the bottom to private ones at the top.

The outer load-bearing walls were built with exposed concrete, serving as both structure and envelope and giving the building a raw, stripped look emulating the purity of natural skin. Facing the street, the corner of the building’s façade exploits the versatility of its concrete material to replicate the curvatures of a face, while also boasting a stylish display of colours with lights placed inside grooves.

The building was constructed in the form of a single concrete mass. It may seem that its thick outer layer is meant to conceal any changes that happen inside, as if to assert independence from business affairs; however, in its detail and directionality, the exterior was sculpted with a keen attention to commercial factors.

Many buildings in business districts experience changes in more than just their signage when new tenants move in: they lose their initial poetic foundation and their carefully crafted interaction with their urban backdrop. Beginning to emerge are buildings lacking robust exterior designs, providing businesses with no more than a skeleton of pillars and slabs. In a city of buildings designed to adapt themselves to all types of businesses, architecture fails to hold its own in the shadow of commerce.

Of course, in ten years’ time, Areuke Spa may very well be replaced by, say, a hair salon, sushi bar, or coffee shop, given Seoul’s constant liability to change; and because architecture cannot keep up with such rapid commercial developments, it is true that buildings do now require more flexible space arrangement and flow of traffic in order to deal with these changes.

However, flexibility does not warrant any compromise in the building’s physical form; there is still room for creativity in how the building interacts with its surroundings visually. Architecture shaped by commercial and branding needs must, and can, adjust to and embrace change without losing its way amid the rapid changes of a city. 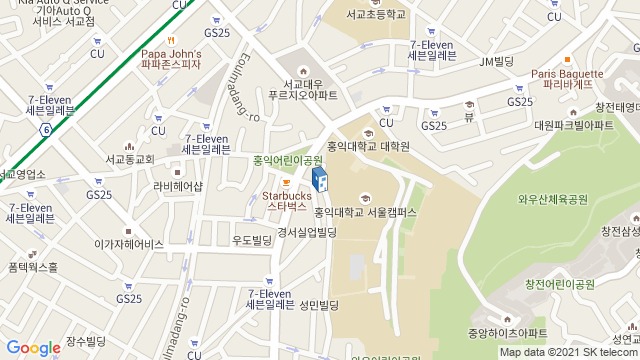 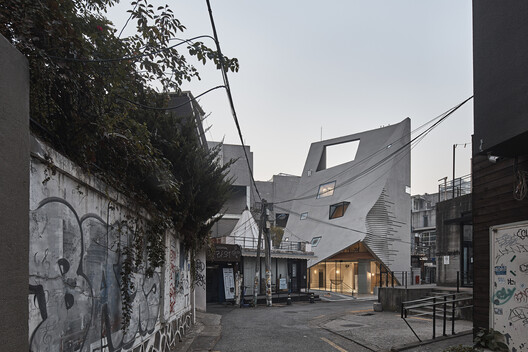