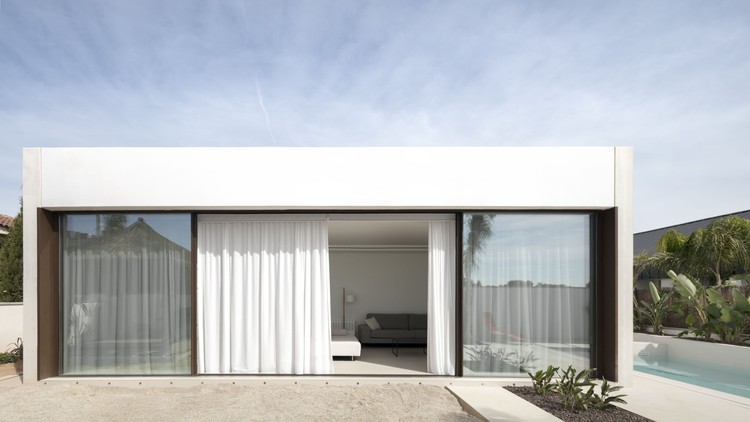 Text description provided by the architects. The project arises from a key premise set by clients, a young family with children. They were clear, they were looking for a functional home that was developed on the ground floor. From there, on a flat plot without large conditions, the simplicity and precision of the prefabricated concrete panels are sought to configure a house of pure lines and white color.

It plays with light as one more compositive element. A set of water layers not only makes up the outside, but we use them to sectorize it, depending on the level of privacy you want. This creates a series of semi-private outdoor platforms, which will open to each one of the bedrooms looking for each user's space to open to the outside as an extension of the bedroom itself.

The floor is bitten by an open patio, creating a terrace for the master bedroom, which opens to the water layer, which not only refreshes the atmosphere and allows its enjoyment, but closes that patio for the exclusive use of the master bedroom.

The aim is to blur the boundaries between indoors and outdoors, although this does not imply a renunciation of the intimacy of spaces. To do this, it becomes essential to study the orientation of each of the spaces and thus avoid excessive sunning or cold spaces that do not invite you to relax. Fundamentally in the living room, where the wall completely disappears to make way for the glass. Only by playing with the orientation can we take the license not to interpose any cantilever, so that the living room itself becomes a porch according to the season and the degree of opening of the windows.

While intimacy is fundamental in a family home, so is the fluidity of the most public spaces, in which nothing defines one stay of another precisely, and resources such as slats are used to give the play area some independence, without visually closing it to the rest of the space.

Although the whole house is developed on the ground floor, extra multipurpose space is provided in the basement, to which opens an English patio where one of its walls behaves like a waterfall that refreshes the atmosphere, and that does not come from anywhere other than the top water layer, like an infinity pool.

Regarding materiality, there are no excesses and the keyword is continuity. A domestic order is sought to accompany the strictest functionality. Mediterranean house with minimalist lines, where light, water, and outdoor space take on the main prominence.