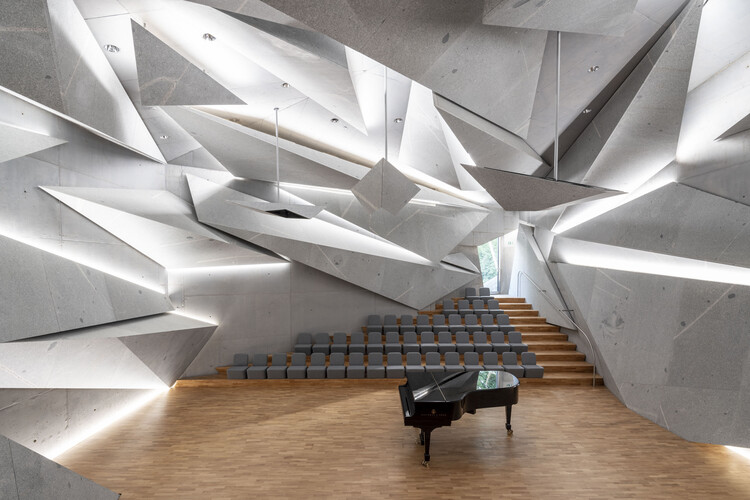 Text description provided by the architects. An underground concert and practice hall has been added to the historic villa of the Haus Marteau music centre in Lichtenberg, Upper Franconia. The shape of the hall was inspired by the area’s former mining tradition. Alexander von Humboldt, the famous German naturalist and explorer, even worked here as a master miner before he later became famous for his global expeditions. The room is shaped by 33 large granite “splinters” which direct the sound and ensure perfect acoustics.

The Ensemble. The Marteau House, a three-storey villa from the 20th century, impresses with its unique structure and striking silhouette. The villa is located in an elegant park, which nestles harmoniously in the gentle hills of its surroundings. A few relics of the past, such as the former tennis court, have been transformed back into a grove, and these different layers of time give the overall complex an expressive appearance.

Conversion of the villa. The existing building was only partially restructured at the ground floor and new garden level., The cellar, however, was extended by 60 cm in depth, creating additional room height for a full-fledged floor with space for three additional practice rooms, a lounge, a canteen, and a foyer. A newly installed lift also makes the building accessible. The architectural language, as well as the furnishings in this area, are based on the stately architecture of the historic building and continue it in a contemporary manner.

The extension. The architect’s intention, when designing the concert hall, was to leave the park and the building largely unchanged. The volume of the expressive, new underground concert hall is integrated into the slope on the south side of the building and the historic ensemble. In the gently rolling landscape of the park, it can only be recognised by its two framed openings: stainless steel swords stuck into the hills of the park reflecting the sky, the park and the villa, and marking an entrance.

The view of the listed house and park remains and can be seen from all angles. The hill of the park does not reveal the secret within its monumental interior.

The New Hall. The formal language of the new building picks up on the mining past of the area and transforms the materials formerly mined here, which were often found in crystalline forms, into the architectural. The concept of the completely subterranean hall emphasises the tradition of the site and at the same time enriches it with a contemporary, dynamic sculptural approach.

A narrow, sloping, connecting passageway links the two parts of the building, leading down like a tunnel and preparing the walkers for the new concert hall through an intense spatial experience. The design idea is based on two opposing mountain explosions, which find their architectural realisation in large granite splinters.

The interior of the New Hall is characterised by 33 large expressive granite splinters, which are studded around a central stage on the walls and ceiling like a solidified explosion. For this purpose, thin granite slabs were mounted on a steel substructure - the largest elements are up to 13 metres long and weigh almost nine tonnes.

The splinter-like, tetrahedron-shaped granite elements define the spatial effect, with a corporeal and moving appearance, and have been placed to model the acoustics of the new hall.

The New Hall is characterised by a central concert stage flanked by two stands arranged in dialogue with one another. Space-defining bodies of granite extend in a sculpturally expressive manner above these two rising spatial elements. They dynamise the space around the stage, with their powerful and expressive directionality whilst magically illuminating it through the backlighting of the splinters. At the same time, floating crystalline light bodies illuminate the stage space. 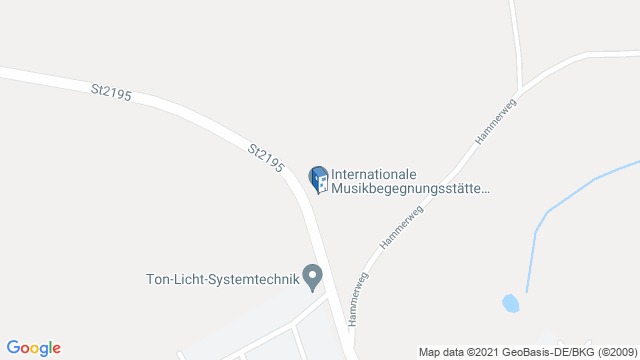 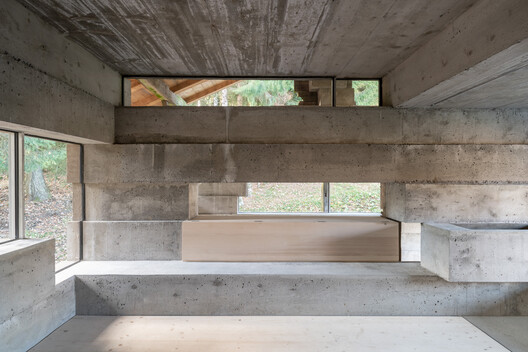