The second round of voting has decided three winners of the ArchDaily & Strelka Award. The grand prize winner will be announced on September 7th at the Future Architect Conference

The joint award is organized by ​ArchDaily, Strelka KB, and Strelka Institute for Media, Architecture and Design. The open call invited emerging architects to submit their built projects that emphasize sustainability, research-based and participatory design, and the innovative use of materials. Architects and architecture and design firms that started their practice no more than 10 years ago could apply with projects that were built in the past five years.

The winners have been selected by readers of ArchDaily and Strelka Mag from a shortlist of 15 architectural projects which were decided in the first round of voting.

The winning projects are:

“Open the town” is the project which creates two spaces of open dialogue, preserving the feeling of home in a new urban environment. Lenin Square and the territory of a former beer factory, the old and the new districts of Durtuli, are linked with a green promenade.

National Library of the Republic of Tatarstan / XOPA, RUSSIA

The National Library of the Republic of Tatarstan is located in a building erected in 1987 for the Kazan branch of the Lenin Central Museum. The building, clad in Armenian tufa stone thus resembling the image of a waving Soviet flag, is one of the centerpieces of Kazan and a significant example of late Soviet architecture. 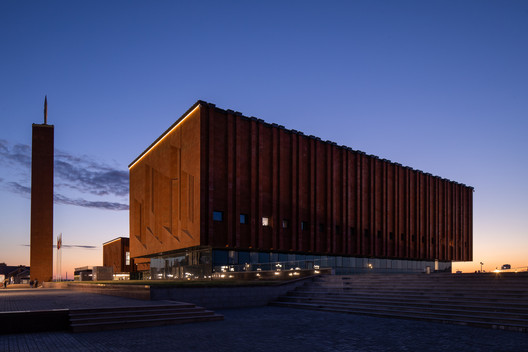