OMA / David Gianotten has revealed the design for a five-story office building in Amsterdam, replacing a 1980s bank headquarters. Located on one of the city’s main avenues among high-end offices, housing and luxury hotels, the architecture of the new project is shaped by the characteristics of its surroundings. Featuring interlocking glass volumes towards the boulevard and brick-clad facades towards the residential area, Apollolaan 171 creates a dialogue with both the green avenue of Amsterdam’s south district and the neighbouring 20th-century Berlage architecture. 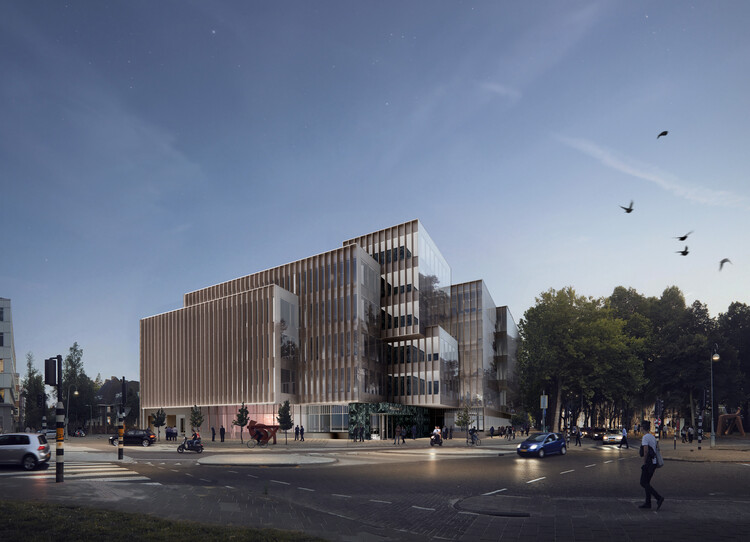 Located on a corner site, the new project will be built on the preserved foundations of the soon-to-be-demolished bank office building, a 20-metre high monolithic structure. With a volume strictly defined by zoning regulations, the architectural image of the new project is an interplay of transparency and tactility. Towards the boulevard, glass façades and shifted volumes make the image of the new office building, mimicking the scale of the nearby buildings and mirroring the greenery of the boulevard. Additionally, a new public area is created by the ground floor setback.

Apollolaan 171 is a design of a dual character. Its transparent face along Apollolaan lends an open and inviting quality to the building. Its face defined by finely crafted brickwork marks a delicate and modest addition to the neighborhood rich in history. The welcoming design improves the experience of entering this unique area in Amsterdam South - David Gianotten, OMA Managing Partner

Towards the residential area, the project features terraced volumes clad in custom-made bricks, evoking the neighbouring historical housing. Echoing the vegetation along the boulevard, the lobby and main circulation core are clad in green marble.
Demolition is underway for the existing bank building, and construction for the new project will start this autumn, with the design set for completion by mid-2023.