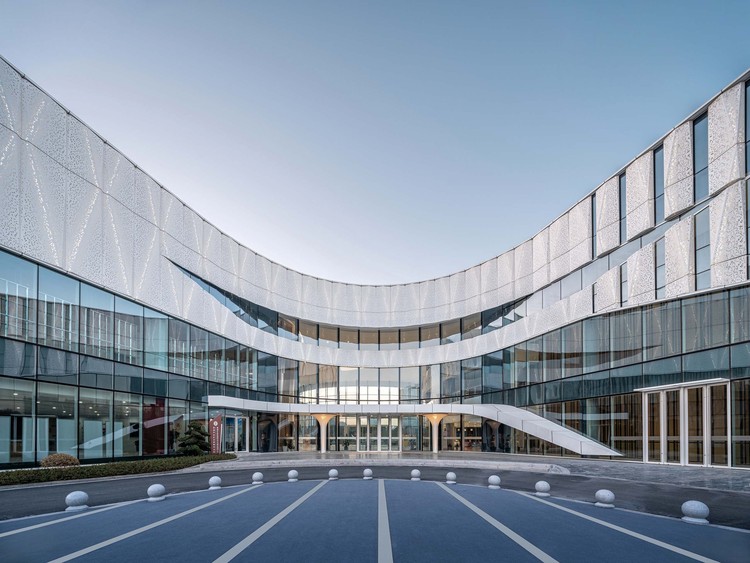 Design Concept——Egrets in the sunglow ahead to fly. The lack of historical context and the lack of urban spatial characteristics is often the problem that architects need to face in the new urban district which is built from the flat ground. Therefore, we followed the design principle of mining the gene of the place and merging the regional impressions. Mining the gene of the place: The design was inspired by the egrets that the architects saw on the site and along the riverside during the site survey, which also happened to be the theme of egrets in Central Park. The cultural center is located on the still water of one side. The folding curtain wall on the south side of the building opens to the lake. The curtain wall glass adopts screen printing to form flying "wings", like wings that are spread out. The overall outline of the building is undulating, clever and elegant, which abstracts a vivid picture of "white birds and clouds moving away".

Merging the regional impressions: The skyline of the cultural center is composed of a number of continuous unfurling arcs, which form a varied and constantly changing effect of the skyline as people's sight moves. The undulating roof curve is the most representative feature of the Jiangnan traditional settlement. Reverse Building Cornice of "Spread wings like a bird, flutter wings like a pheasant" are vividly reflected in the more agile and light Jiangnan architecture. Therefore, the design is modern and concise while integrating the impression of Jiangnan's traditional context.

Design generation, integral forming. Firstly, according to the functional distribution of surrounding cities, the overall pattern of east-archives, library (urban attribute), and west-cultural center (community attribute) is formed. The design does not separate the three functions into a distributed layout, but organically connects them in series and integrates them through a large atrium. The intensification and commoditization of the building make the functions closely linked together, in shortening the flow line, save the land and other aspects are remarkable effects while reserving the possibility of future development. The concept of the complex and diverse cultural complex is more in line with the currently open and efficient design principles.

Then, through a series of techniques of "introduction, extension, and unfolding", the building extends naturally and forms a state of mutual integration and penetration with the city and nature.

Introduction: To echo city relationships, the building boundaries converge in the four directions toward the periphery of the base to form the entrance plaza space, which naturally forms a building shape. Each plaza is connected to the central hall and integrated, forming a citizen plaza on the north side, sports and ecology on the west side. The park, the memorial park on the east side, and the waterfront leisure park on the south side have four theme square parks.
Extension: The main building extends to the south, towards the open lake. As a result, the atrium, cultural center, and library all have broad and transparent view corridors like "long scroll of scenery" and "giant screen of the city", as if hanging in the center of the city of a huge painting.
Unfolding: The roof of the building undulated and extended to form a "wing" roof space. The roof on the south side gradually curved to meet the needs of the top space of the theatre and the view expansion of the library, forming a beautiful skyline like spreading wings like a bird and fluttering wings like a pheasant.

The construction strategy -- a consistent language, the creation of subtle. The architects strive to maintain a consistent strategic operation and continue to use the single element of "Egrets in the sunglow" as the expression of the creative concept in the in-depth construction, so as to avoid the cultural weakening caused by an excessive combination of techniques and elements. As a public building in an emerging urban area, it should show the attitude of the times, but while using contemporary cutting-edge design vocabulary and concepts, it should subtly integrate the regional context into the detailed design, rather than go the other way. . Therefore, we hope to create subtleties on the curtain wall and shutter skin.

Fold Wing Curtain Wall: We used a folding screen-printed glass curtain wall on the "Urban Giant Curtain" on the south façade that unfolded facing the lake. Through the three-dimensional combination of triangles, combined with the white feather pattern screen-printed glass alternated with transparent glass, the visual effect of wings stretched and layered is formed. At the same time, it creates a hazy beauty of light and dark looming.

Function compound. The public cultural center of the Nantong Development Zone has multiple functions. The building includes a citizen library, district-level archives, a black box theater, an 800-person auditorium, and a comprehensive activity center that includes activities for young people and the elderly. In addition, there are open and shared, ecologically pleasant, Three-dimensional compound characteristic atrium among the three functional blocks. Through the implantation of a large number of gray spaces mentioned above, we have combined the core functions of sports, leisure, catering, retail, social networking, exhibitions, and other diversified public service functions. In addition to satisfying the community‘s public cultural services, it pays more attention to social interaction, participation and interaction, artistic edification, healthy living, and other aspects of humanistic life care, so as to present itself in the city as a creator and leader of a new cultural lifestyle.

Conclusion. “Egrets in the sunglow ahead to fly”: With its elegant image, open and inclusive attitude, innovative spirit, and eco-friendly concept, the Public Cultural Center of Nantong Development Zone has become a new living room favored by citizens and a pioneer of The Times leading the development and reform of the cultural center since its establishment. 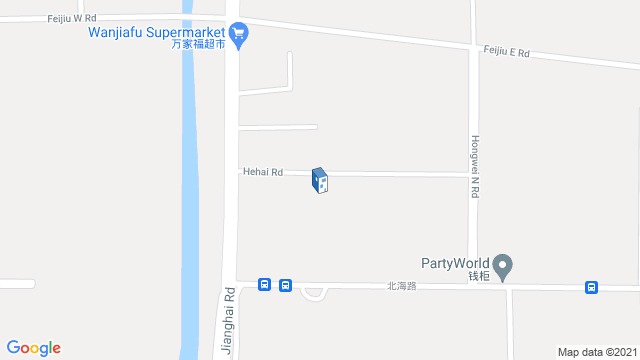 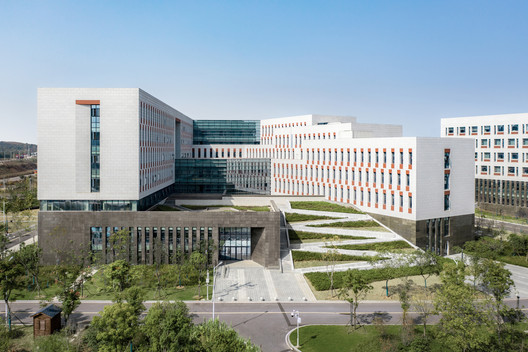 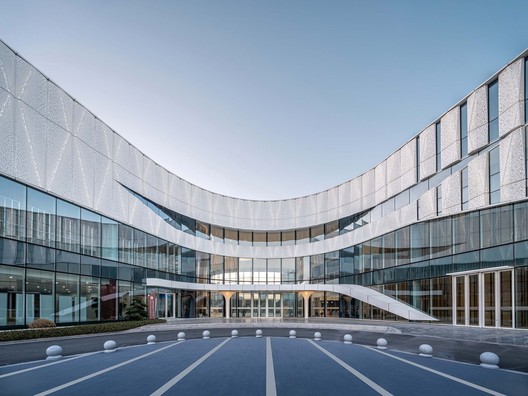