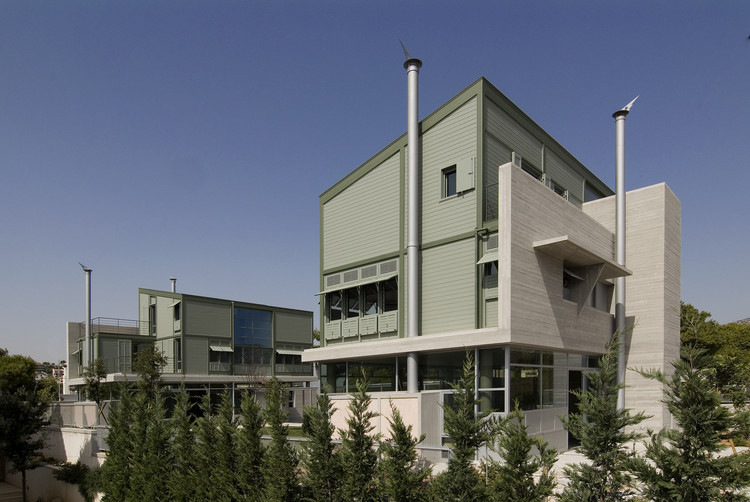 Text description provided by the architects. The two houses are placed on the opposite sides of an elongated plot in a Northern suburb of Athens. The essential compositional features, which organised conceptually and programmatically the two structures are the longitudinal, vertical to the street, wall, which crosses and unites the entire complex, and, the two ‘L’ shaped, concrete structural elements.

These elements ensure a unified ground level while organising and protecting the two houses by turning them inwards, to the central courtyard that consists of the complex’s main outdoor space, the centre of the extended household’s life. The courtyard opens up towards the South, and it is protected by the North by the longitudinal wall the unites the two independent volumes. This connection, expressed by both the wall and the metal pergola, consists of the main programmatic link of the two houses that belong to members of the same family.

The two ‘L’ shaped elements are lifted from the ground in order to create a direct visual and programmatic unity of the overall ground floor level. This is where every day, living spaces (lounge, dining, kitchen) are in both houses. At the same time, the vertical surfaces of the two ‘L’s define the complex’s private spaces. The separation between collective, open, and transparent rooms from private ones is also morphologically and structurally expressed.

Distinct, lightweight, metal, and wooden structures define the upper level and the mezzanine, which include the family’s bedrooms and working spaces. The two houses are united in an underground facilities floor, which includes service areas and parking spaces. Overall, the basement creates the impression of another covered open space, lighted generously by skylights and other openings. Un-plastered, unpainted concrete, metal, and wood are the project’s main materials, while the plot’s limits are defined by new or repaired stone walls. 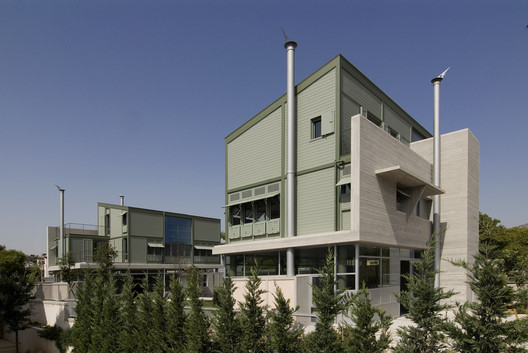