Text description provided by the architects. The Richter project is a tactful restoration of a landmark building of the mid-19th century in order to adapt it to current commercial and public functions. The interiors of the Moscow mansion are built on the New+Old concept, where contemporary design objects are combined with the original heritage of the architect and conservator Fyodor Richter.

The minimum interventions both in the planning pattern and in the historic elements of the decor have preserved the integrity of the original author’s message. The flexibility of the contemporary planning made it possible to create new spaces without disturbing the structure of the previous ones (for example, the state enfilade).

"We had a principle in the project: the new should not argue with the historic or visually belong to it — all new items and objects are temporary and do not interact with the old ones. For example, we did not use built-in furniture, we built just one new wall, and we didn’t hide fasteners on the recreated stucco molding on the ceiling so that visitors could see the boundaries of the authenticity. Partitions made of red glass were chosen according to the same principle: they can be easily disassembled and thus restore the historic volume of the spaces."

Today, the Richter consists of three main zones: a hotel, public spaces and a garden. The 7-room hotel occupies the state enfilades of the second floor and the historic mezzanine. The rooms with a space of 40-60 m2 differ in layout, but retain the style unity. There are no built-in pieces of furniture; the historic stucco molding[Olga1] , parquet, millwork and hardware are preserved. Also, the contemporary art works — the spatial accents that support the overall style of the project – are present in each room. By the way, the main reference for the design of corporate style and even the names of the rooms was the historic plafond "The Four Seasons" with the images of animals and birds made in a rare technique for Moscow of the XIX century.

The replacement of utility systems was carried out without compromising the historic appearance of the building. So, the level of comfort necessary for modern citizens was created in the spaces of the XIX century.

"In this project, we not only built-in the modern carefully, but also returned the building to its original historic forms and content. For example, we found a historic doorway under the stairs leading to the state enfilade. Once it was blocked up with mattresses and simply plastered over. Now a hidden door appeared there again and connected two important Richter zones and restored the historic justice."

Richter's public spaces include a restaurant, a bar, a magazine hall and a library on the ground floor, a printing shop on the floor below, as well as a gallery of contemporary art and a radio studio in the former underground warehouses left over from the previous owner — the bank.

The Richter Garden is a neutral area for breakfast, watching movies and open-air installations of contemporary artists. The space was formed with the aid of three elements. The "plane surface"— the polished concrete of neutral gray color, which by its seamless structure unites the garden into a single space – is the first element. The "Volume" – a metal structure that is equivalent in height to a mansion – is the second. This is the basis for exhibitions of artists and designers. And the third element — the "Amphitheater" — is opposed to the "Volume", but is created from the same elements. 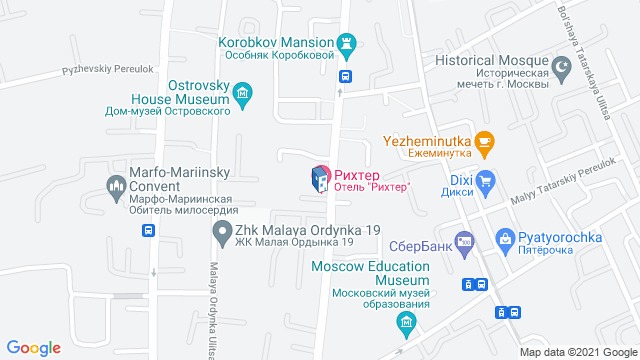