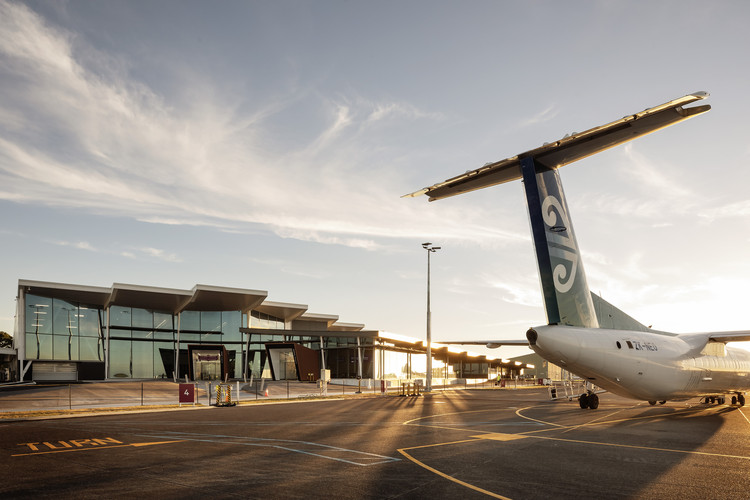 Text description provided by the architects. Te Hono, New Plymouth Airport Terminal, Beca Design Practice. This significant project, conceived as a strong architectural and cultural gateway, provided an opportunity to integrate the local hapū (subtribe), Puketapu, into the design team to create a site-specific response that distinctly reflects the Taranaki region which the airport serves.

The storied history of the site was as important as other design drivers - such as the challenging environmental conditions and the need to accommodate future regional growth. Te Hono, which means “to connect”, is located on ancestral land confiscated from iwi (tribe) in the 1960s. Sixty years later, the architecture of the terminal puts mana whenua (territorial rights) at its heart.

The aim was to represent important ancestral stories in the fabric of the building and six design narratives were chosen with one, The Ascension from the Earth; Descending from the Sky, selected as the principle thematic. It tells the story of Tamarau, a celestial being, who was so captivated by the earthly beauty of Rongo-ue-roa (terrestrial being) that he came down to meet her. It was a natural fit for the design of an airport.

The roofline of the terminal is inspired by this origin story as one form appears to step up from a landscaped mound (Rongo-ue-roa) to meet the second descending roof form (Tamarau). The form also highlights the radial formation and fractal patterning of the feathers on a bird’s wing and is a deliberate attempt to contrast the strength of parallel design drivers.

Orienting the spine of the building to reflect an ancestral journey from the mountain to the Waiongana river mouth was a further way to acknowledge history but also useful for wayfinding, creating a natural, easily negotiated connection from parking lot through departure area to the plane. On a clear day, Maunga Taranaki (Mt Taranaki) can be seen from the concourse giving visitors to the region a Taranaki-specific experience. Manaakitanga – the Māori concept of hospitality – underpins practical aspects of the design too. The faceted curved forms of the building at the entrance and airside ‘embrace’ travellers, to shelter them from the elements.

Within the concourse, a 70-metre tukutuku (ornamental lattice panel) is a bold backdrop to operations, hospitality and retail. Rongo-ue-roa (terrestrial being) is represented in scarlet of the local hebe that is endemic to the site and Tamarau, the celestial being, is depicted in vibrant yellow. The stitches of the tukutuku, represented by ‘crosses and plus signs’, feature on the panel itself but also in subtle ways throughout the building. They signify togetherness and connection and speak to the ongoing regenerative relationship between Puketapu hapū, the New Plymouth Airport Company and the New Plymouth District Council.

The vision to co-design the new airport alongside a leadership team from Puketapu has allowed an airport which has meaning for all people of the region. This project was an opportunity to step well beyond a normal consultancy role to establish an inclusive design process that would both acknowledge and transcend the conflicts of the past. 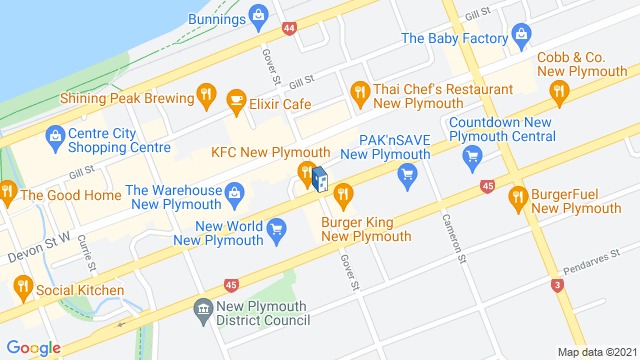