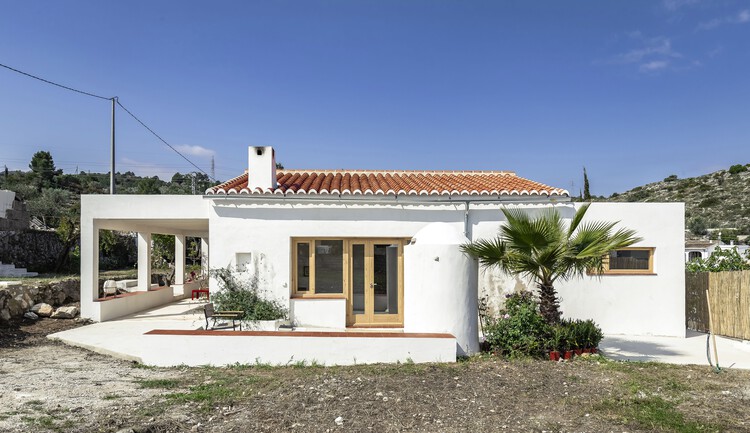 Text description provided by the architects. The project consists of the rehabilitation of a Mediterranean country house, embedded into dry land terraces, which is divided into two volumes: the main house and a shed. The original construction, in a state of prolonged abandonment, dates from the late nineteenth century and responds to the traditional type that rises on stone walls and is covered with wooden and tile roofs. Other smaller bodies have been added to the primitive ones, increasing their surface with flat volumes in contrast to the original sloping roofs; forming corrals, kitchen, bathroom, and porch.

The whole set follows the topography by gently descending through interior and exterior stairs. Its openings and windows respond properly to the four existing orientations, through different sizes and positions, adapting to the demands of the dry Mediterranean climate. The proposal seeks to empower the values and characteristics of the original building, preserving its typical elements and its own language, proper of this type of agricultural house. Of course humble, but also with a strong and powerful constructional clarity and speech. Its walls are rehabilitated and its roofs replaced, maintaining the contrast between the main sloping roofs and the secondary bodies flat roofs. Under this solid enclosure, the main house has an open day-space (living-kitchen) with a bathroom aside, and four bedrooms staggered two by two, which go downstairs until the old corrals. A large porch is attached to the south, through which we step up to the plateau of the shed. In the shed, there is a large undefined open space and a small bathroom, so it becomes an independent piece.

In order to give a new life to the house, current elements and systems are included, which will add comfort and functionality. These new must dialogue with the existing ones, without distorting their strength and simplicity. To do so, we use vernacular architecture materials: clay on roofs, wood on carpentry, lime on surfaces, and ceramic on the few coverings; arranged concisely and precisely, so as not to stand out. The result is a house/shelter that seeks a balance between the old and the current. A balance between new and existing elements, giving a vision of the transforming capacity of the intervention on a popular architecture in abandonment, requires our sincere and dedicated commitment. The commitment to recover this cultural and vital legacy through simplicity and balance is the most effective answer. 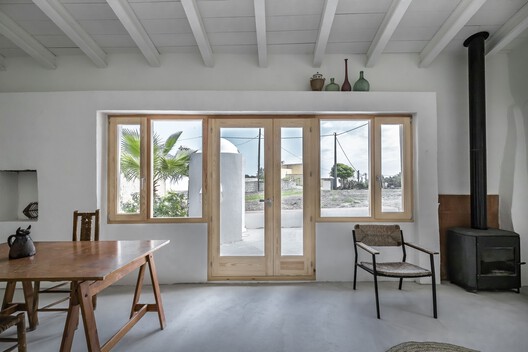