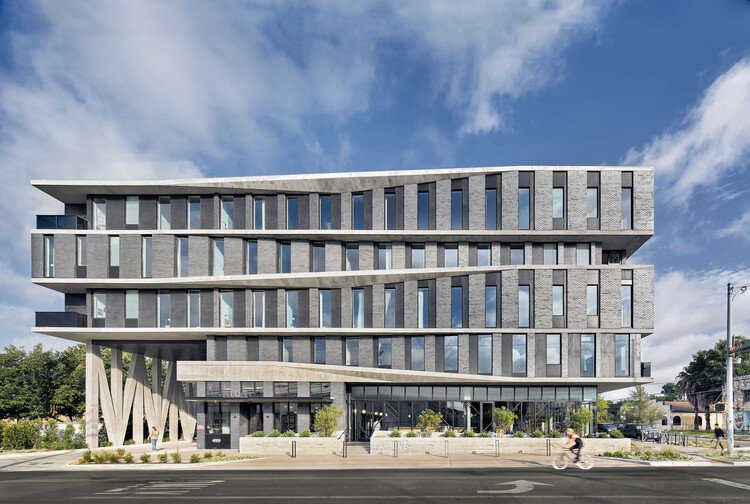 Text description provided by the architects. The Arrive East Austin Hotel comprises eighty-three rooms and a multi-use podium housing two restaurants, three bars, a coffee shop, leasable street-side retail space, and parking. The owner/design team sought to question established anti-public hotel tropes -- the grand entry… the “hotel” restaurant… the empty lobby. Instead, the team chose to minimize the hotel identity and create something that is not so much a hotel with supporting amenities beneath than a collection of public-oriented food and beverage establishments that happen to have hotel rooms above.

While it is a statement structure, street-level restaurants claim the pedestrian identity. Above, the undulating facade serves as a dynamic response to one of the more form-directive requirements of Austin’s street-side guidelines. But there is a programmatic function to these flourishes as the apparently shifting floor plates create balconies and covered porches for the hotel occupants. In the same way, the design employs the cantilevered building itself to create a code-required sidewalk cover.

ARRIVE opened amidst rapid gentrification in East Austin, but there was a community ethos at play. It is a large structure, but it is a dynamic and durable building that embraces the public.

In 2015, the Arrive Hotel Group was a new operation with a single (recently opened) hotel in Palm Springs. But it had ambitions to create an almost brandless hotel chain working within robust local neighborhoods.  And it was interested in East Austin.

Concurrently, Austin was grappling with the gentrification of the area. As a partial solution, the city had opted to densify development along East Sixth Street – a direct artery into downtown – while preserving the residential character of the neighborhoods to the North and South. The unintended consequence of this newly minted transit-oriented corridor ordinance was that Sixth Street rapidly became a canyon between 60’ street edges of inexpensively built multi-family construction.

In opposition to the new construction along Sixth, the design team looked to the building and material typologies that existed in the surrounding warehouses, as well as the masonry and concrete construction, found at Huston Tillotson University (a historically Black university that overlooks the hotel). The masonry-infilled concrete structure evokes the neighborhood history without resorting to mimesis. A semi-outdoor restaurant reuses the pre-existing masonry structure (now physically attached to the principal hotel by way of the kitchens) further tying the complex back to its original East Austin roots.

For its part, Arrive desired a pedestrian environment that spoke to public food, beverage, and retail establishments first and to lodging second. It wanted a building that almost suppressed its identity as a hotel – it wanted a public amenity.

The long-term impact on the neighborhood remains to be seen. Unfortunately, Covid 19 and the bitter February Texas freeze derailed Arrive’s operations for a beat, but those are largely back in full swing. While it can be argued that East Austin did not truly need a 77,000 sqf hotel development, the project team worked to produce a structure that might serve as a signpost to others that this neighborhood is important and worthy of ambitious and durable architecture. 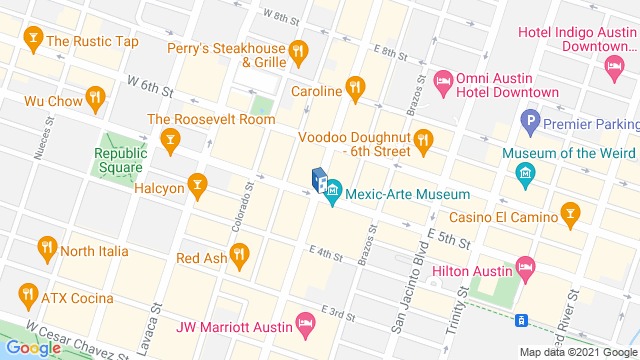 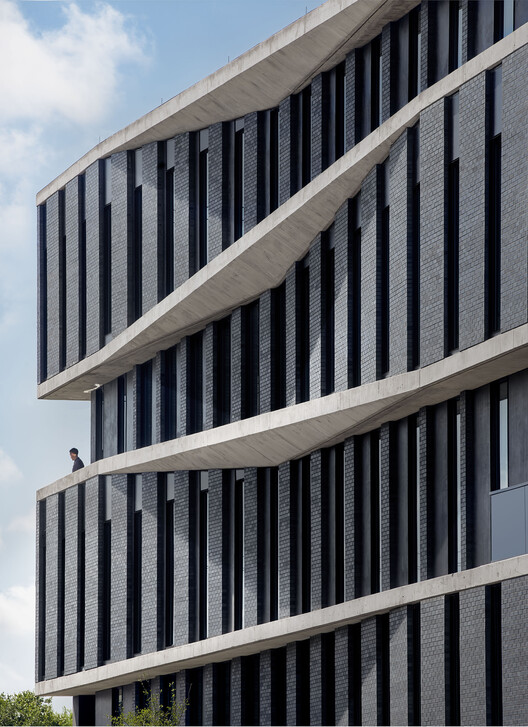