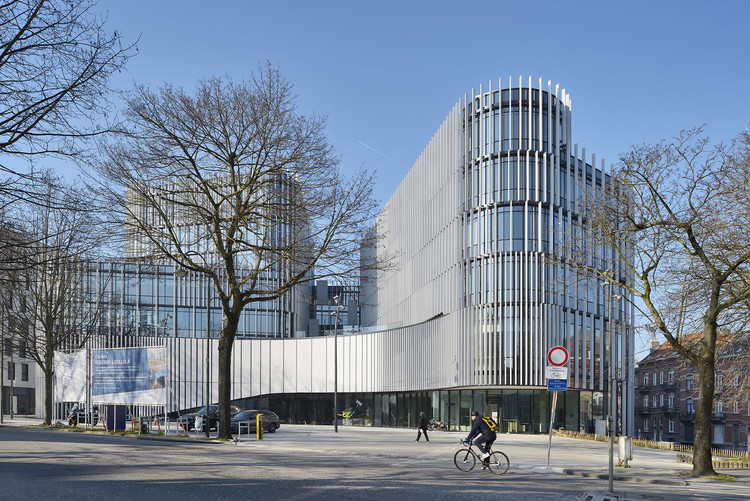 Text description provided by the architects. The goal of the project was to give a new identity to the administration of Etterbeek and bring together all the different functions in one building the city administration a public social action center and a local police station. We designed this particular shape to increase communication and flux between existing neighborhoods. The organic shapes flow around public spaces creating plazas, paths, and courtyards.

The main technical difficulty we encountered was the structure of the cantilevered reception hall on the north wing. To reduce the impact of columns on the ground floor and in the hall, this wing is suspended by an important steel truss system. Other challenges involved the facing system. Due to the weight of the concrete sunshades, the contractors had to specially design a load-bearing steel curtain wall that could hold the weight of the sunshades.

The City Hall structure consists of prefabricated and in-situ concrete in combination with steel girders and trusses in more difficult areas. The facing system is a steel curtain wall on which are placed fiber concrete sunshades. Indoor divisions were constructed using glass partitions, light gypsum board structures, gypsum blocks, and concrete blocks. The apartment building’s structure is a combination of prefab and in-situ concrete. The facing of the ground floor is in architectural concrete, offering durability to the most exposed areas, and the upper floors are in white stucco. The indoor divisions are mainly in concrete and gypsum blocks.

The administrative building houses, the new City Hall of Etterbeek, the Public Social Action Center of Etterbeek, and a local police station. The shape of the building surrounds a public plaza dominated by a curved cantilever that welcomes us into the heart of the project, a majestic double leveled lobby. From the front desk, it is possible to access all functions throughout the building. The large lobby works as a hub from which the visitors are quickly guided to the services they need. All functions have independent access, offering flexibility for the future. Our intention was to create a modular building that can evolve over time according to the needs of its users. A detailed solar study led to the conception of the concrete sun shading system, which gives the building its identity.

The apartment block is a subsidized housing project owned by the city of Etterbeek. The apartments are mostly 2- and 3-bedroom flats. All of the 41 apartments have a front and rear view and an outdoor space. The building complies with the latest passive energy standards. 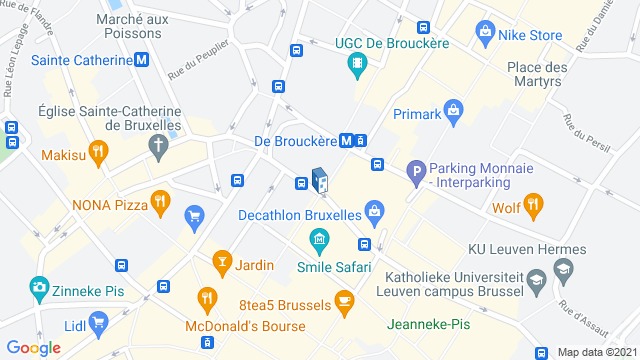 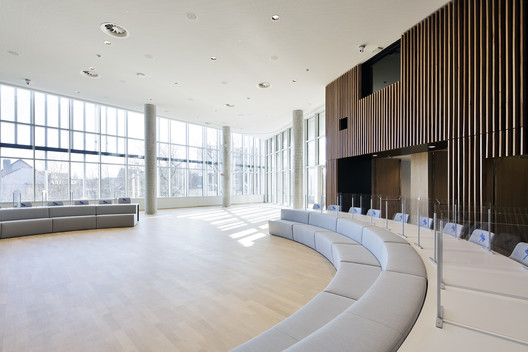 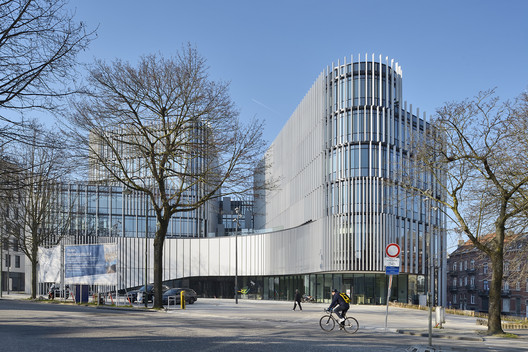