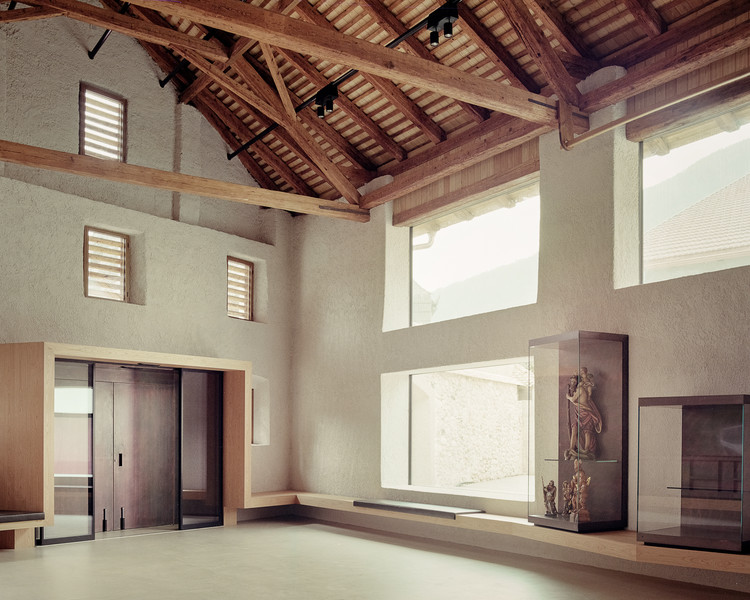 Text description provided by the architects. Founded in 1142 and nestled within the vineyard-lined basin of the Eisack valley near Bressanone (Italy), the abbey not only represents one of the most significant architectural ensembles in South Tyrol today but also stands as a preeminent Augustinian Abbey of its time. Like a small, self-sufficient village, each building within the monastery complex played a specific role: the constituent churches, chapels, mills, workshops, wine cellars, and farmhouses formed an indelible nucleus—only a portion of which has been converted into a museum.

MoDusArchitects’ addition injects new functions into old buildings and rewires the relationships between the ancillary structures and the main buildings of the Abbey. From the outside, the project is only evident by the blackened, copper-clad bridge that emerges from a cluster of reconstituted service buildings that connect to the main cloister at the upper level.

Part demolition, part renovation, and part restoration, the project intervenes in three secondary, adjacent structures set against the backdrop of the 17th-century wing of the main cloister.  The first building is gutted to transform the agrarian storehouse into the airy, double-height space of the entry atrium with an overlooking mezzanine level.  The second building, on the other hand, replaces the demolished, one-story lavatorium with a sweeping stair and elevator tower that bridges over to the antique wing of the cloister.  The third and final structure is renovated to house a seminar and event space at the ground level with a newly configured outdoor courtyard, and a temporary exhibition space and choir room on the upper level.

The new atrium features the custom-built ticket counter, display cases, and light fixtures whose articulated details of copper, wood, and glass create new conversations within the newly exposed eaves of the restored, pitched wooden roof and the rough-hewn plasterwork.

Visitors leave the entry hall heading outdoors to begin their tour at the Abbey cloister, the itinerary winds through the monastery, passing through the 18th-century library and a newly restored 17th-century frescoed room to then conclude the circuit by bridging back to the new addition on the upper level, at the top of the stairwell. In this way, MoDusArchitects’ project is both the starting point and the point of arrival of the museum sequence. Completing the museum visit and stepping beyond the antique walls of the Abbey into the space of the new bridge,  a large window provides a visual release: a foreshortened view over the rooftop of the renovated storehouse snaps back to the Sant’Angelo chapel for orientation, while also affording privileged views into the walled garden of the Abbey, and the vineyards beyond.

Bush hammered, exposed concrete walls, trowel-finished concrete floors, and thick chestnut woodwork provide a tactile backdrop to bring the spatial sequence full circle back to the cascading stairs that lead to the atrium once again.  The architectural elements are held together in an atmospheric balance of subtle tones and natural materials; a sense of serenity is afforded by the measured use of a limited design palette whereby the new and old are reconciled through discrete details, be it from the parapet of the stair, the fenestration, to the finishing of the vertical and horizontal surfaces.

The project is accompanied by the artistic interventions of Paul Renner whose romantic and playful interpretations of the hortus sanctis augustini create a whimsical sidekick to the sobriety of the interiors. Renner’s picturesque excursus on the botanical heritage of the Abbey unfolds along with the metal cladding of the elevator tower as visitors descend from the upper level of the cloister back to the entry hall.

MoDusArchitects’ work takes on the heterogeneity of the disparate architectural time periods of the Novacella Abbey with an incisive approach that melds together both historical and contemporary vocabularies in a balanced whole. The design of the sequence of spaces and their haptic, tactile messages of emptiness, time passing, and the more ephemeral qualities that only the visitor can experience, carry forward all that the Abbey offers into the future. 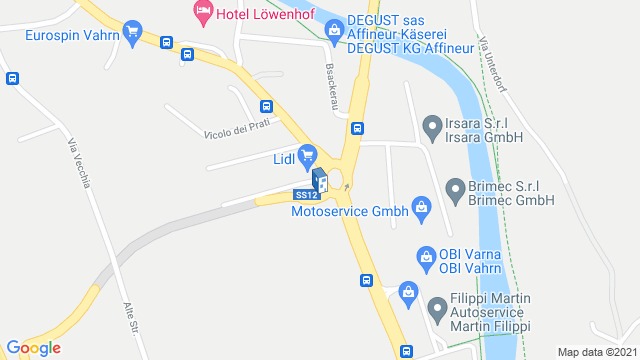 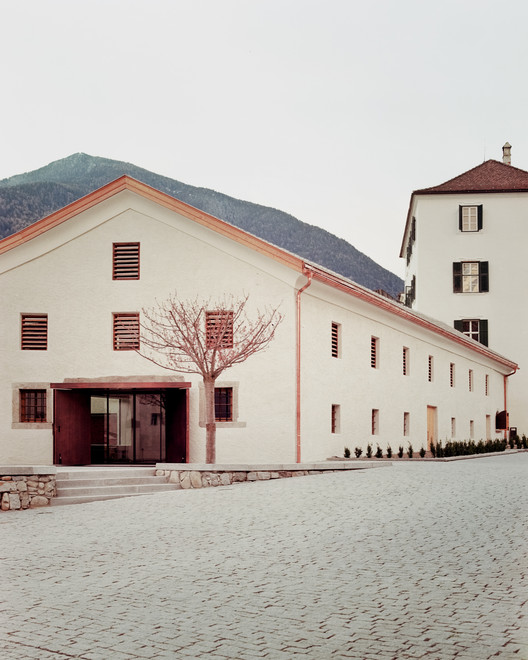 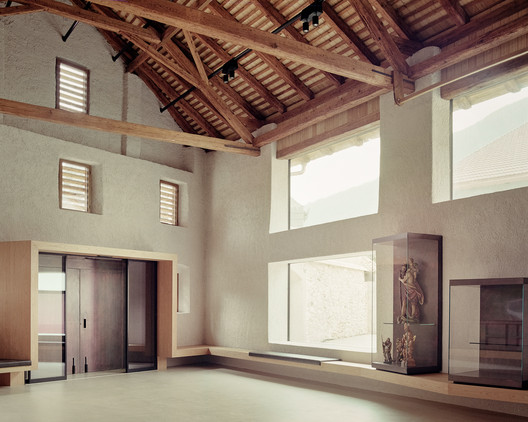