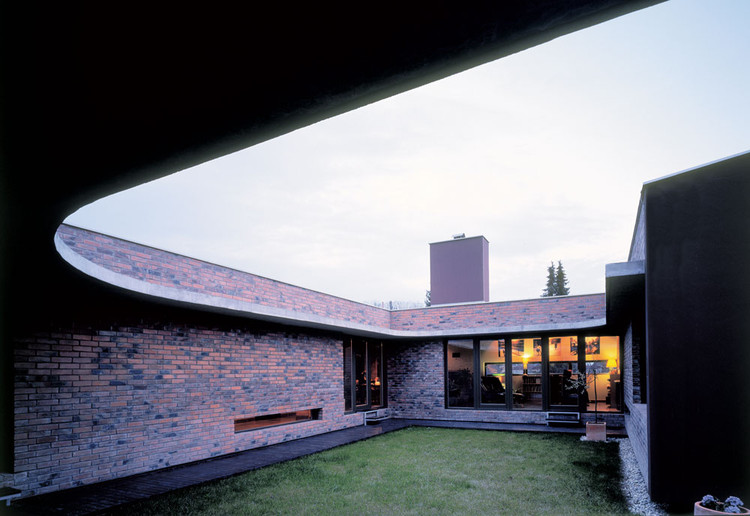 Text description provided by the architects. The lot of some 1,300 sqm is situated in the Jazbina district in the north-eastern periphery of Zagreb. Its immediate, totally uninteresting surroundings consist of a number of plain suburban family houses with small gardens and a few weekend cottages. The city is only 10 minutes away by car; the centre can be reached in 20 minutes tops. The main advantage of this situation– distinguishing this suburban landscape from countless similar landscapes of transition – is its northern prospect: humid chestnut woods are less than a hundred meters away. Though close to the foothills of the mountains, the lot is almost entirely flat with only a very slight slope to the south. its relatively large area provided us with the opportunity to develop it as an island almost completely independent of the surrounding conditions. This project was our attempt to reconcile the objective conditions of the present day life on the outskirts of a sprawling city with the human need for dwelling and for inhabiting nature.

This family residence is conceived as an open arrangement of “architectural” and “natural” elements in which the architectural element is wrapped around the natural one. Together they constitute a united domestic landscape that meets both the private and social needs of its inhabitants. The living quarters, which need a roof as well as walls, close off three sides of the patio. Its fourth side, shaded by a canopy, protrudes into the garden extending it further towards the woods. The wing of the house parallel to the street contains a two-sided (facing the patio and the street) living room. The harmonious ratio of floor area to room height optimizes sound reception while listening to music or watching a movie.

The heavy mass of the thick walled house, which is constructed entirely of ordinary and inexpensive materials, has been slightly elevated from the humid ground. Wooden flooring has simply been laid around the green lawn of the patio. A single- pitch roof, which slopes towards the internal core of the house, is clad with corrugated metal. The dark brown walls facing the street and the neighbors are smoothly plastered; those facing the patio are clad in recycled reject bricks in nuances ranging from black to orange. The concrete cornice, protruding from the brick cladding and rounded on its inside corners, gathers the space of the patio, defining it as a room with walls but without a roof and not just as a remnant of the solid. The inexpensive decorative layer attached the structure of the house recalls the Romanticist idea of the weave as the original art of architecture and the fencing in of territory as its motive force. The weathering of the material –burnt brick made by accidental overheating during its production – began even before it was built into the wall.

This is an experiment in integrated life on the periphery; the architecture for a lifestyle that annihilates some of the inconveniences of suburban living, while exploiting most of its advantages. this is also an attempt to reconcile Jazbina’s current transitional condition with its primordial name* in a project of sustainable dwelling; in harmony with the contemporary development of this inhabited landscape, but also including the notion of its lost, but not forgotten, more natural past.

The contentment of the clients proves us that this experiment has succeeded for the better part of it. Without their kindness and understanding, it would never be possible. 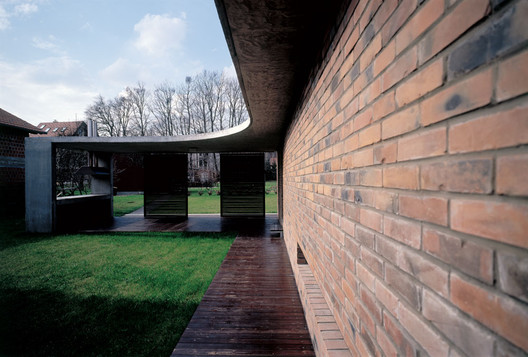