UNStudio is part of the consortium that recently won the competition for a new congress and conference centre in the Netherlands, a project intended to further establish the Brainport Eindhoven region as one of Europe’s leading technology hubs. The Elysion Congress Centre expands an exiting, similarly programmed venue, striving for low impact on the surroundings while incorporating numerous sustainable features. 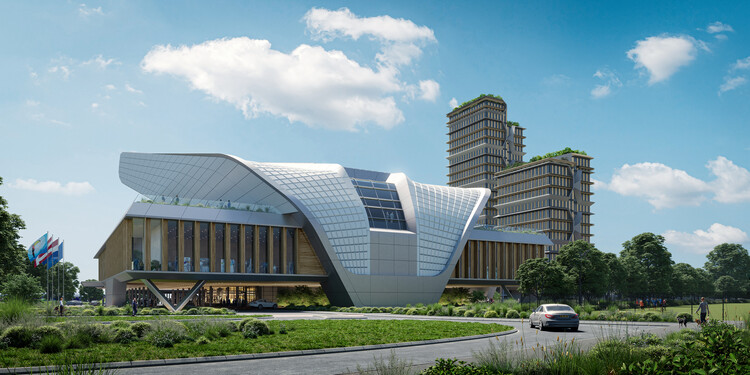 The proposal expands the existing Van der Valk Congress and Event location, situated at the border of a large parkland area, well connected to the Eindhoven Airport and the city centre. The design renovates existing facilities and creates a new flexible auditorium, together with a new hotel and a vertical foyer housing various activities. One of the critical challenges informing the design was the requirement to keep the exiting facilities operational during construction; therefore, the extension to the congress space is placed next to the existing building, while the new auditorium sits on top of the conference centre.

The new 1,500-seat auditorium showcases a flexible design and can be divided into four independent spaces for smaller conferences. Retractable seating allows for the lower auditorium area to be used as a banquet hall, and a recording studio will facilitate online events. A new foyer connects the different levels and programs of the project. Space features areas for relaxation, working or informal meetings and provides access to outdoor spaces. The proposal also envisions a second hotel tower with sports and leisure facilities.

UNStudio Transforms JetBrains Office into a Green and Immersive Campus

The design places sustainability at its core through its energy-positive ambition and largest regional charging station for electric cars. Moreover, the wood and glass façade is planned to feature nitrogen dioxide absorbing surfaces - an innovative new nano-technology that can capture pollutants from its surroundings.

As the competition sought not only designs for the new building but also a consortium that could build, finance, and operate the development, UNStudio and DVP partnered with Van der Valk as the operator, Huybregts Relou as the contractor, together with Tielemans and Quant Architectuur. The project is expected to be completed in 2025. 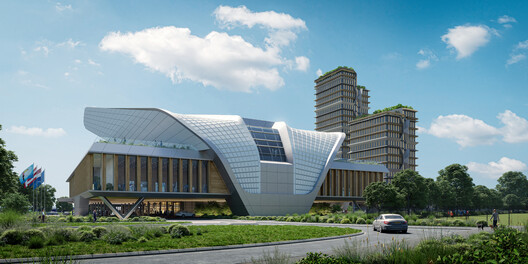