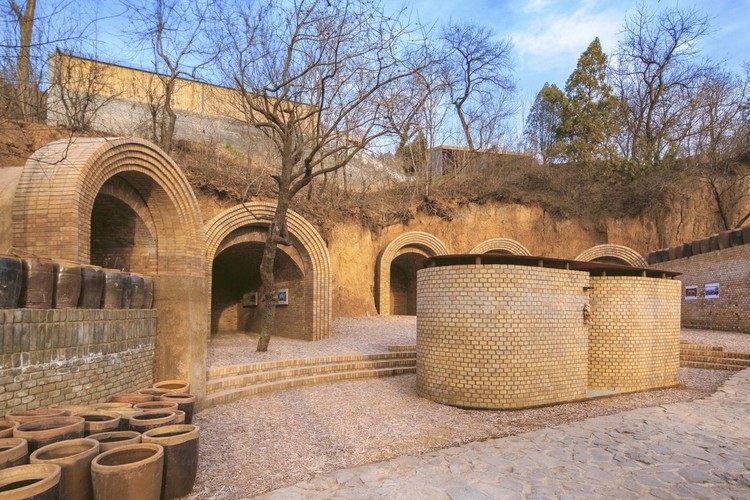 Text description provided by the architects. The project is located in Luoyang Sancai Pottery Village and consists of five-hole cave dwellings and a public toilet. The fire-resistant bricks used to build traditional pottery kilns are used in the renovation of old cave dwellings to give them new vitality. The pure and plain cultural heritage of the western Henan region, the traditional cave space, and ceramic firing technology are fully integrated here.

Caves are typical traditional dwellings in Shaan-Gan-Ning and western Henan. The soil in this region is highly viscous and has good compression resistance, and naturally meets the structural requirements. Because living in cave dwellings is warm in winter and cool in summer and also is very cheap to construct, many local people live in cave dwellings for generations. The owner hopes that we will renovate these cave dwellings at a very low cost and turn it into a public art plaza.

Part of these cave has begun to collapse, so it is necessary to fully consider the structural safety of the renovation plan. A safer approach is to use concrete like shaping mountain tunnels or use arched steel frames, but neither way meets the local conditions. After repeatedly discussing with the owner and structure consultants, we decided to use double-layer fire-resistant bricks to build arch structures for cave renovation and invited local experienced workers to construct them. Fire-resistant bricks are the best material for traditional ceramic kilns because of their extremely high density and strength. In addition to the strength that can meet the structural demand, it also fits with the characteristics of the pottery village. The mottled and rich warm color of the bricks is also the expression of the earth color in western Henan.

We designed the caves to be completely open to visitors, making them an extension of the plaza. They will be used as temporary exhibition space. According to the existing conditions of the cave dwellings, we have expanded the original caves in different sizes to make those caves various in height or width, or depth. The gap between the brick arch and the curved earth is filled with a cement layer to further strengthen the overall structural strength. We preserved the soil texture on the outside cliff as a landscape and also designed a series of platforms along the cliff to separate crowds approach the cliff. The entrance of each cave is specially treated and expanded in rhythm according to the module of the brick, which presents a rich layer of light and shadow, and the cave’s sculptural figure is further emphasized in the vertical direction.

There was a chimney room for burning tobacco leaves in the center of the plaza originally, which was later converted into a temporary restroom for tourists. After fully communicating with the owner and taking into account the comprehensive management of the park, we decided to keep this restroom function on the original site but in a new form. It not only defines the boundary of the square but also becomes a sculpture in the centre plaza.

The newly designed restroom is 7.2 meters long, 2.4 meters wide, and 2.7 meters high. The plan consists of two semicircles. Stagger the arcs in opposite directions at the intersection, separated entrances on reversed sides are formed. Fire-resistant bricks are used to construct the wall, but the transparent ceramic glaze is applied to the bottom layer brick and then re-fired to form a waterproof surface. The specially-cut bricks are trapezoidal on the short sides, which is convenient for masonry to construct the transition at the arc. Reversing each other at the straight line back and forth, the brick body forms a woven texture with large and small heads. The brickwork and the plan layout of the restroom also metaphors the traditional concept of yin and yang circulation.

The roof is made of 5mm weathering steel, which is separated from the top of the wall by a narrow slot. The gap makes the whole building look light and can provide a panoramic view on the high side while allowing sunlight to project inside. The internal weathering steel partition is also specially designed and customized. In addition to the design, we also participated in the entire construction of this project, from bricklaying, door panel installation, sanitary ware installation, to roof straightening, and the installation of door bolts and hinges, as far as possible without a professional construction team. The quality of the final product was under control.

Finally, we sprinkled ceramsites on the plaza. When people foot on, click sound keeps just like the sound of ceramics cracking after firing. When these ceramsites are completely crushed, they will turn into powder and melt in the soil. 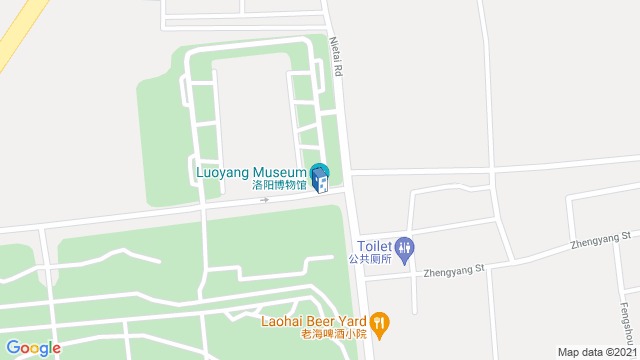 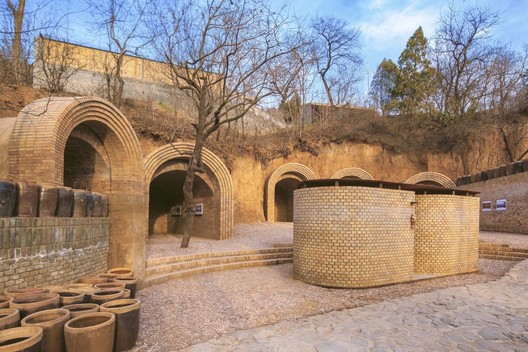